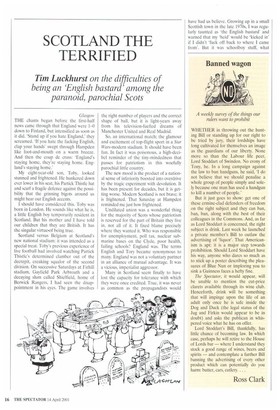 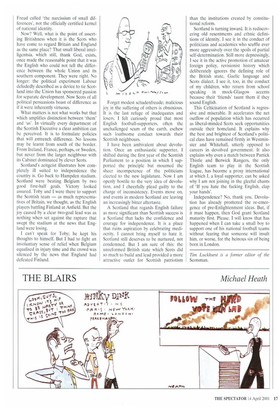 Tim Luckhurst on the difficulties of

being an 'English bastard' among the paranoid, parochial Scots

Glasgow THE chants began before the first-half news came through that England were 1-0 down to Finland, but intensified as soon as it did. 'Stand up if you hate England,' they screamed. If you hate the fucking English, clap your hands' swept through Hampden like foot-and-mouth on a warm breeze. And then the coup de crass: 'England's staying home, they're staying home. England's staying home.'

My eight-year-old son, Toby, looked stunned and frightened. He hunkered down ever lower in his seat, his Partick Thistle hat and scarf a fragile defence against the possibility that the grinning bigots around us might hear our English accents.

I should have considered this. Toby was born in London. He sounds like what he is, a little English boy temporarily resident in Scotland. But his mother and I have told our children that they are British. It has the singular virtue-of being true.

Scotland versus Belgium at Scotland's new national stadium: it was intended as a special treat. Toby's previous experience of live football had involved watching Partick Thistle's determined clamber out of the decrepit, creaking squalor of the second division. On successive Saturdays at Firhill stadium, Gayfield Park Arbroath and a decaying slum called Shielfield, home of Berwick Rangers, I had seen the disappointment in his eyes. The game involves the right number of players and the correct shape of ball, but it is light-years away from his television-fuelled dreams of Manchester United and Real Madrid.

So, an international match; the glamour and excitement of top-flight sport in a Star Wars-modern stadium. It should have been fun. In fact it was poisonous, a high-decibel reminder of the tiny-mindedness that passes for patriotism in this woefully parochial little country.

The new mood is the product of a national sense of inferiority boosted into overdrive by the tragic experiment with devolution. It has been present for decades, but it is getting worse. Modern Scotland is not brave; it is frightened. That Saturday at Hampden reminded me just how frightened.

Undiluted union was a wonderful thing for the majority of Scots whose patriotism is reserved for the part of Britain they live in, not all of it. It fixed blame precisely where they wanted it. Who was responsible for unemployment, poll tax, nuclear submarine bases on the Clyde, poor health, failing schools? England was. The terms English and Tory became synonymous to many. England was not a voluntary partner in an alliance of mutual advantage. It was a vicious, imperialist aggressor.

Many in Scotland seem finally to have lost the capacity for tolerance with which they were once credited. True, it was never as common as the propagandists would have had us believe. Growing up in a small Scottish town in the late 1970s, I was regularly taunted as the English bastard' and warned that my `heid' would be 'kicked in' if I didn't 'fuck off back to where I came from'. But it was schoolboy stuff, what Freud called the narcissism of small differences', not the officially certified kernel of national identity.

Now? Well, what is the point of asserting Britishness when it is the Scots who have come to regard Britain and England as the same place? That small liberal intelligentsia, which still, thank God, exists, once made the reasonable point that it was the English who could not tell the difference between the whole Union and its southern component. They were right. No longer: the political experiment Labour deludedly described as a device to tie Scotland into the Union has sponsored passion for separate development. Now Scots of all political persuasions boast of difference as if it were inherently virtuous.

What matters is not what works but that which amplifies distinction between 'them' and 'us'. In virtually every department of the Scottish Executive a clear ambition can be perceived. It is to formulate policies that will entrench difference. No lessons may be learnt from south of the border. From Ireland, France, perhaps, or Sweden, but never from the larger neighbour with its Cabinet dominated by clever Scots.

Scotland's zeitgeist illustrates how completely ill suited to independence the country is. Go back to Hampden stadium. Scotland were beating Belgium by two good first-half goals. Victory looked assured, Toby and I were there to support the Scottish team — as much representatives of Britain, we thought, as the English players battling Finland at Anfield. But the joy caused by a clear two-goal lead was as nothing when set against the rapture that swept the stadium at the news that England were losing.

I can't speak for Toby; he kept his thoughts to himself. But I had to fight an involuntary sense of relief when Belgium equalised in injury time and the crowd was silenced by the news that England had defeated Finland. Forget modest schadenfreude; malicious joy in the suffering of others is obnoxious. It is the last refuge of inadequates and losers. I felt curiously proud that most English football-supporters, often the unchallenged scum of the earth, eschew such loathsome conduct towards their Scottish neighbours.

I have been ambivalent about devolution. Once an enthusiastic supporter, I shifted during the first year of the Scottish Parliament to a position in which I supported the principle but mourned the sheer incompetence of the politicians elected to the new legislature. Now I am openly hostile to the very idea of devolution, and I cheerfully plead guilty to the charge of inconsistency. Events move on, and events in modern Scotland are leaving an increasingly bitter aftertaste.

A Scotland that regards English failure as more significant than Scottish success is a Scotland that lacks the confidence and courage for independence. It is a place that ruins aspiration by celebrating mediocrity. I cannot bring myself to hate it. Scotland still deserves to be nurtured, not condemned. But I am sure of this: the unreformed British state which •Scots did so much to build and lead provided a more attractive outlet for Scottish patriotism than the institutions created by constitutional reform.

Scotland is turning inward. It is rediscovering old resentments and ethnic definitions of identity. I see it in the conduct of politicians and academics who scuffle ever more aggressively over the spoils of partial self-determination. Still more depressingly, I see it in the active promotion of amateur foreign policy, revisionist history which deliberately ignores the defining role of the British state, Gaelic language and Scots dialect. I see it, too, in the conduct of my children, who return from school speaking in mock-Glasgow accents because their 'friends' taunt them if they sound English.

This Celticisation of Scotland is regressive and miserable. It accelerates the net outflow of population which has occurred as liberal-minded Scots seek opportunities outside their homeland. It explains why the best and brightest of Scotland's political class have remained firmly in Westminster and Whitehall, utterly opposed to careers in devolved government. It also explains why even a match between Partick Thistle and Berwick Rangers, the only English team to play in the Scottish league, has become a proxy international at which I, a loyal supporter, can be asked why I am not joining in the gleeful chants of 'If you hate the fucking English, clap your hands'.

Independence? No, thank you. Devolution has already prottoted the re-emergence of pre-Enlightenment ideas. But, if it must happen, then God grant Scotland maturity first. Please. I will know that has happened when I can take a small boy to support one of his national football teams without fearing that someone will insult him, or worse, for the heinous sin of being born in London.

Tim Luckhurst is a former editor of the Scotsman,