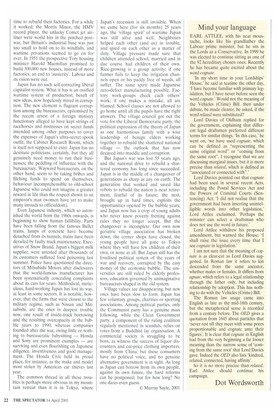 EARL ATTLEE, with his neat moustache, looks like his grandfather the Labour prime minister, but he sits in the Lords as a Conservative. In 1999 he was elected to continue sitting as one of the 92 hereditary chosen ones. Recently he has became quite excited about the word cognate.

'In my short time in your Lordships' House,' he said at teatime the other day, 'I have become familiar with primary legislation, but I have never before seen the word cognate.' Would not the meaning of the Vehicles (Crime) Bill, then under debate, be made clearer, he asked, if the word related were substituted?

Lord Davies of Oldham replied for the government, explaining that different legal draftsmen preferred different terms for similar things. 'In this case,' he went on, 'we have used cognate, which can be defined as "representing the same original word" or "coming from the same root". I recognise that we are discussing marginal issues, but it is more precise than related, which is defined as "associated or connected with".'

Lord Davies pointed out that cognate had been used in several recent Acts, including the Postal Services Act and the Powers of Criminal Courts (Sentencing) Act. 'I did not realise that the government had been inserting unintelligible words into other legislation,' Lord Attlee exclaimed. 'Perhaps the minister can select a draftsman who does not use the word in future.'

Lord Attlee withdrew his proposed amendment, but warned the House: 'I shall raise the issue every time that I see cognate in legislation.'

I am not sure that the meaning of cognate is as clear-cut as Lord Davies suggested. In Roman law it refers to kin descended from the same ancestor, whether males or females. It differs from agnate, which refers to a legal relationship through the father only, but including relationship by adoption. This has nothing to do with the Vehicles (Crime) Bill.

The Roman law usage came into English as late as the mid-18th century, but the metaphorical sense is recorded from a century before. The OED gives a quotation from 1645 about particles that 'never rest till they meet with some pores proportionable and cognate unto their figures'. It is clear that cognate in English had from the very beginning a far looser meaning than the narrow sense of 'coming from the same root' that Lord Davies gave. Indeed the OED also lists 'kindred, related, connected, having affinity'.

So it is no more precise than related. Earl Attlee should continue his campaign.