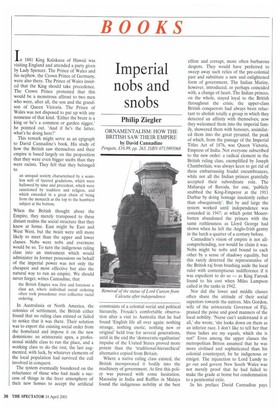 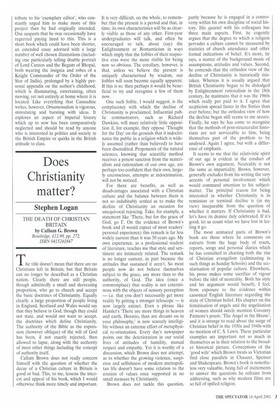 ORNAMENTALISM: HOW THE BRITISH SAW THEIR EMPIRE by David Cannadine Penguin, £16.99, pp. 263, ISBN 0713995068 In 1881 King Kalakaua of Hawaii was visiting England and attended a party given by Lady Spencer. The Prince of Wales and his nephew, the Crown Prince of Germany, were also there. The Prince of Wales insisted that the King should take precedence. The Crown Prince protested that this would be a monstrous affront to two men who were, after all, the son and the grandson of Queen Victoria. The Prince of Wales was not disposed to put up with any nonsense of that kind. 'Either the brute is a king or he's a common or garden nigger,' he pointed out. 'And if he's the latter, what's he doing here?'

This remark might serve as an epigraph to David Cannadine's book. His study of how the British saw themselves and their empire is based largely on the proposition that they were even bigger snobs than they were racists. They felt that they belonged to

an unequal society characterised by a seamless web of layered gradations, which were hallowed by time and precedent, which were sanctioned by tradition and religion, and which extended in a great chain of being from the monarch at the top to the humblest subject at the bottom.

When the British thought about the Empire, they merely transposed to these distant realms the social structure that they knew at home. East might be East and West West, but the twain were still more likely to meet than the upper and lower classes. Nobs were nobs and evermore would be so. To turn the indigenous ruling class into an instrument which would administer its former possessions on behalf of the imperial power was not only the cheapest and most effective but also the natural way to run an empire. We should never forget, writes Cannadine, that

In Australasia or North America, the colonies of settlement, the British either found that no ruling class existed or failed to notice that it was there. Their solution was to export the existing social order from the homeland and impose it on the new dominions: an aristocratic apex, a professional middle class to run the place, and a working class to do the rest, the last augmented, with luck, by whatever elements of the local population had survived the cull involved in conquest.

The system eventually foundered on the reluctance of those who had made a success of things in the freer atmosphere of their new homes to accept the artificial constraints of a colonial social and political hierarchy. Froude's comfortable observation after a visit to Australia that he had found 'English life all over again: nothing strange, nothing exotic, nothing new or original' held true• for several generations, until in the end the 'democratic-egalitarian' impulse of the United States proved more potent than the 'traditional-hierarchical' alternative copied from Britain.

Where a native ruling class existed, the British incorporated it bodily into the machinery of government. At first this policy was pursued with some hesitation. Macaulay in India and Raffles in Malaya • found the indigenous nobility at the best effete and corrupt, more often barbarous despots. They would have preferred to sweep away such relics of the pre-colonial past and substitute a new and enlightened form of government. The Indian Mutiny, however, introduced, or perhaps coincided with, a change of heart. The Indian princes, on the whole, stayed loyal to the British throughout the crisis; the upper-class British conquerors had always been reluctant to abolish totally a group in which they detected an affinity with themselves; now they welcomed them into the imperial family, showered them with honours, assimilated them into the great pyramid, the peak of which, from the passage of the Imperial Titles Act of 1876, was Queen Victoria, Empress of India. Not everyone subscribed to the new order: a radical element in the British ruling class, exemplified by Joseph Chamberlain, was always keen to get rid of these embarrassing feudal encumbrances, while not all the Indian princes gratefully accepted their subordinate role. The Maharaja of Baroda, for one, 'publicly snubbed the King-Emperor at the 1911 Durbar by doing homage insolently rather than obsequiously'. But by and large the system worked until independence was conceded in 1947; at which point Mountbatten abandoned the princes with the same ruthlessness as Lloyd George had shown when he left the Anglo-Irish gentry in the lurch a quarter of a century before.

Cannadine's vision of empire is not allcomprehending, nor would he claim it was. Nobs might be nobs and bound to each other by a sense of shadowy equality, but this rarely deterred the representative of the British raj from brushing aside the local ruler with contemptuous indifference if it was expedient to do so — as King Farouk found to his cost when Miles Lampson called in the tanks in 1942.

Nor did the lower and middle classes often share the attitude of their social superiors towards the natives. Mrs Gordon, wife of the aristocratic Governor of Fiji, praised the poise and good manners of the local nobility. 'Nurse can't understand it at all,' she wrote, 'she looks down on them as an inferior race. I don't like to tell her that these ladies are my equals, which she is not!' Even among the upper classes the metropolitan Briton assumed that he was more civilised and sophisticated than his colonial counterpart, be he indigenous or émigré. The injunction to Lord Lundy to go out and govern New South Wales was not merely proof that he had failed to make the grade at home but condemnation to a penitential exile.

In his preface David Cannadine pays tribute to his 'exemplary editor', who constantly urged him to make more of this project than he had originally intended. One suspects that he may occasionally have regretted paying heed to this. This is a short book which could have been shorter, an extended essay adorned with a large number of well chosen illustrations (including one particularly telling double portrait of Lord Curzon and the Begum of Bhopal, both wearing the insignia and robes of a Knight Commander of the Order of the Star of India), prolonged by a highly personal appendix on the author's childhood, which is illuminating, entertaining, often moving, yet not entirely at home where it is located. Like everything that Cannadine writes, however, Ornamentalism is vigorous, stimulating and bursting with ideas. It explores an aspect of imperial history which up to now has been comparatively neglected and should be read by anyone who is interested in politics and society in the British Empire or quirks in the British attitude to class.