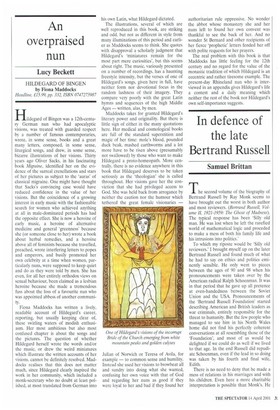 HILDEGARD OF BINGEN by Fiona Maddocks

Hildegard of Bingen was a 12th-century German nun who had apocalyptic visions, was treated with guarded respect by a number of famous contemporaries, wrote, in some sense, books and a great many letters, composed, in some sense, liturgical songs, and drew, in some sense, bizarre illustrations of her visions. Thirty years ago Oliver Sacks, in his fascinating book Migraine, identified her on the evidence of the surreal crenellations and stars of her pictures as subject to the 'auras' of classical migraine. One might have thought that Sacks's convincing case would have reduced confidence in the value of her visions. But the coincidence of a growing interest in early music with the fashionable search for women who achieved anything at all in male-dominated periods has had the opposite effect. She is now a heroine of early music, a heroine of alternative medicine and general 'greenness' because she (or someone close to her) wrote a book about herbal remedies, and a heroine above all of feminists because she travelled, preached, wrote interfering letters to popes and emperors, and busily promoted her own celebrity at a time when women, particularly nuns, were supposed to keep quiet and do as they were told by men. She has even, for all her entirely orthodox views on sexual behaviour, been claimed as a lesbian heroine because she made a tremendous fuss about the loss of a favourite nun who was appointed abbess of another community.

Fiona Maddocks has written a lively, readable account of Hildegard's career, reporting, but usually keeping clear of, these swirling waters of modish enthusiasm. Her most ambitious but also most confused chapter is about the songs and the pictures. The question of whether Hildegard herself wrote the words and/or the music, or drew the weird miniatures which illustrate the written accounts of her visions, cannot be definitely resolved. Maddocks realises that this does not matter much, since Hildegard clearly inspired the work in her community, which included a monk-secretary who no doubt at least polished, at most translated from German into his own Latin, what Hildegard dictated.

The illustrations, several of which are well reproduced in this book, are striking and odd, but not as different in style from many illuminations of this period and earlier as Maddocks seems to think. She quotes with disapproval a scholarly judgment that Hildegard's 'miniatures remain for the most part mere curiosities', but this seems about right. The music, variously presented on a number of recordings, has a haunting freestyle intensity, but the verses of one of Hildegard's songs, given here in full, have neither form nor devotional focus in the random lushness of their imagery. They compare very poorly with the great Latin hymns and sequences of the high Middle Ages — written, alas, by men.

Maddocks takes for granted Hildegard's literary power and originality. But there is little sign of either in the many quotations here. Her medical and cosmological books are full of the standard superstition and magic of her time: mole's blood, pounded duck beak, mashed earthworms and a lot more have to be risen above (presumably not swallowed) by those who want to make Hildegard a proto-homeopath. More centrally, there is no evidence anywhere in this book that Hildegard deserves to be taken seriously as the 'theologian' she is called throughout. Her visions gave her the conviction that she had privileged access to God. She was held back from arrogance by neither the caution nor the humour which tethered the great female visionaries — Julian of Norwich or Teresa of Avila, for example — to common sense and humility. Instead she used her visions to browbeat all and sundry into doing what she wanted, confusing her own voice with that of God and regarding her nuns as good if they were loyal to her and bad if they found her authoritarian rule oppressive. No wonder the abbot whose monastery she and her nuns left to found her own convent was thankful to see the back of her, And no wonder St Bernard and other recipients of her fierce 'prophetic' letters fended her off with polite requests for her prayers.

The real problem with this book is that Maddocks has little feeling for the 12th century and no regard for the value of the monastic tradition of which Hildegard is an eccentric and rather tiresome example. The present-day Rhineland nun who is interviewed in an appendix gives Hildegard's life a context and a daily meaning which neither the rest of the book nor Hildegard's own self-importance suggests.