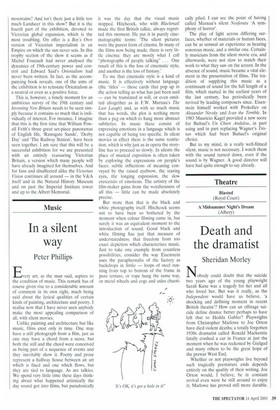 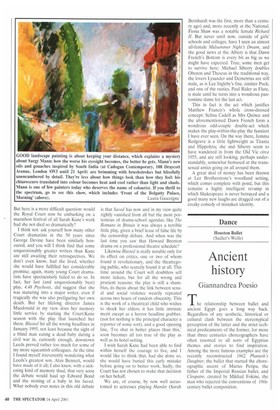 Death and the dramatist

Nobody could doubt that the suicide two years ago of the young playwright Sarah Kane was a tragedy for her and all who loved her. But was it really, as the Independent would have us believe, 'a shocking and defining moment in recent British theatre'? How can an offstage suicide define drama; better perhaps to have left that to Hedda Gabler? Playwrights from Christopher Marlowe to Joe Orton have died violent deaths; a totally forgotten 1930s dramatist called Ronald Mackenzie fatally crashed a car in France at just the moment when he was reckoned by Gielgud and many others to be the great hope of the prewar West End.

Whether or not playwrights live beyond such tragically premature ends depends entirely on the quality of their writing. Joe Orton would, I believe, be in constant revival even were he still around to enjoy it; Marlowe has proved still more durable. But here is a more difficult question: would the Royal Court now be embarking on a marathon festival of all Sarah Kane's work had she not died so dramatically?

I think not: ask yourself how many other Court dramatists in the 50 years since George Devine have been similarly honoured, and you will I think find that some unquestionably greater writers than Kane are still awaiting their retrospectives. We don't even know, had she lived, whether she would have fulfilled her considerable promise; again, many young Court dramatists have spectacularly failed to do so. In fact, her last (and unquestionably best) play, 4.48 Psychosis, did suggest that she was maturing into a major writer, even if tragically she was also prefiguring her own death. But her lifelong director James Macdonald in my view does her memory little service by starting the Court/Kane season with the play that launched her there. Blasted hit all the wrong headlines in January 1995, not least because the sight of a blind man eating a dead baby during a civil war in, curiously enough, downtown Leeds proved rather too much for some of my more squeamish colleagues. At the time I found myself irreverently wondering what Leeds's greatest son, Alan Bennett, would have made of it all; I also knew, with a sickening kind of memory thud, that very soon the debate would haul up Edward Bond and the stoning of a baby in his Saved. What nobody ever notes in this old debate is that Saved has now and in my view quite rightly vanished from all but the most portentous of drama-school agendas; like The Romans in Britain it was always a terrible little play, given a brief lease of false life by the censorship debate. And when was the last time you saw that Howard Brenton drama on a professional theatre schedule?

Likewise Blasted is really notable only for its effect on critics, one or two of whom found it revolutionary, and the theatregoing public, who scarcely found it at all. This time around the Court will doubtless sell more tickets, but for all the wrong and prurient reasons; the play is still a shambles, its thesis about the link between sexual and social violence wearily repeated across two hours of random obscenity. This is the work of a theatrical child who wishes to shock her elders; it has little intrinsic merit except as a horror headline grabber, (not for nothing is the principal character a reporter of some sort), and a good opening line, 'I've shat in better places than this,' soon becomes all too true of the play as well as its hotel setting.

I wish Sarah Kane had been able to find within herself the courage to live, and I would like to think that, had she done so, she would have buried this early mistake before going on to better work. Sadly, the Court has not chosen to make that decision on her behalf.

We are, of course, by now well accustomed to actresses playing Hamlet (Sarah Bernhardt was the first, more than a century ago) and, more recently at the National, Fiona Shaw was a notable female Richard II. But never until now, outside of girls' schools and colleges, have I seen an almost all-female Midsummer Night's Dream, and the good news at the Albery is that Dawn French's Bottom is every bit as big as we might have expected. True, some men get to survive here: Michael Siberry doubles Oberon and Theseus in the traditional way, the lovers Lysander and Demetrius are still male, as is Lee Ingleby's fine, sinister Puck; and one of the rustics, Paul Rider as Flute, is male until he turns into a wondrous pantomime dame for the last act.

This in fact is the act which justifies Matthew Francis's whole cross-dressed concept: Selina Cade11 as Mrs Quince and the aforementioned Dawn French form a wondrous odd-couple double-act which makes the play-within-the-play the funniest I have ever seen. On the way there, Jemma Redgrave is a little lightweight as Titania and Hippolyta; she and Siberry seem to have wandered in from the Old Vic circa 1955, and are still looking, perhaps understandably, somewhat bemused at the transsexual antics going on all around them.

A great deal of money has been thrown at Lez Brotherstone's woodland setting, which comes complete with pond, but this remains a highly intelligent revamp in which Shakespeare is never betrayed and a good many new laughs are dragged out of a creaky comedy of mistaken identity.