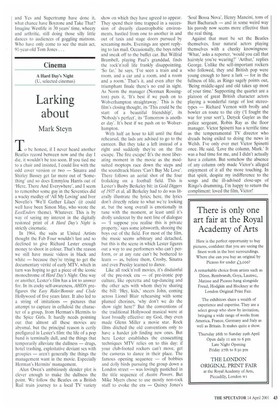 To be honest, if I never heard another Beatles record between now and the day I die, it wouldn't be too soon, If you tied me to a chair and insisted, I could live with the odd cover version or two — Sinatra and Shirley Bassey get far more out of 'Something' and so does Emmylou Harris out of 'Here, There And Everywhere', and I seem to remember some guy in the Seventies did a wacky medley of 'All My Loving' and Ivor Novello's 'We'll Gather Lilacs' (it could well have been Simon May, who wrote the EastEnders theme). Whatever. This is by way of saying my interest in the digitally restored print of A Hard Day's Night is strictly cinematic.

In 1964, the suits at United Artists thought the Fab Four wouldn't last and so declined to give Richard Lester enough money to shoot in colour. That's the reason we still have music videos in black and white — because they're trying to get the documentary verite of early MTV, which in turn was hoping to get a piece of the iconic monochrome of Hard Day's Night. One way or another, Lester's film has a lot to answer for. In its cocky self-awareness, AHDN prefigures the Easy Rider/Bonnie and Clyde Hollywood of five years later. It also led to a string of imitations — pictures that attempt to capture in celluloid the character of a group, from Herman's Hermits to the Spice Girls. It hardly needs pointing out that almost all these movies are abysmal, but the principal reason is eerily prefigured in Lester's film: the life of a pop band is terminally dull, and the things that temporarily alleviate the dullness — drugs, hotel trashing, exploitative deviant sex with groupies — aren't generally the things the management want in the movie. Especially Herman's Hermits' management.

Akin Owen's ambitiously slender plot is clever enough to make the dullness the point. We follow the Beatles on a British Rail train journey to a local TV variety show on which they have agreed to appear. They spend their time trapped in a succession of drearily claustrophobic environments, hustled from one to another in and Out of taxis and stage doors pursued by screaming mobs. Evenings are spent replying to fan mail. Occasionally, the boys rebel and sneak off to the buffet car. But Wilfrid Brambell, playing Paul's granddad, finds the rock'n'roll life frankly disappointing. 'So far.' he says, 'I've seen a train and a room, and a car and a room, and a room and a room.' That's it, and even after the triumphant finale there's no end in sight. As Norm the manager (Norman Rossington) puts it, 'It's best if we push on to Wolverhampton straightaway.' This is the film's closing thought, its 'This could be the start of a beautiful friendship', its 'Nobody's perfect', its 'Tomorrow is another day'. It's best if we push on to Wolverhampton.

With half an hour to kill until the final rehearsal, the lads are advised to go to the canteen. But they take a left instead of a right and suddenly they're on the fire escape. The fire escape! It's the most liberating moment in the movie as the modsuited moptops race down the steps and the soundtrack blares 'Can't Buy Me Love', There follows an aerial shot of the four frolicking on a football field. This is Lester's Busby Berkeley bit: in Gold Diggers of 1935 et al, all Berkeley had to do was literally illustrate the lyrics; here, the lyrics don't directly relate to what we're looking at, but the song overall is emotionally in tune with the moment, at least until it's drolly undercut by the next line of dialogue — 'I suppose you realise this is private property,' says some jobsworth, shooing the boys out of the field. For most of the film, the music seems arbitrary and detached, but this is the scene in which Lester figures out a way to use performers who can't perform, or at any rate can't be bothered to learn — as, before them, Crosby, Sinatra and even Presley learned to dance.

Like all rock'n'roll movies, it's disdainful of the pre-rock era — of pre-ironic pop culture, like operetta and tap-dancing and the other acts with whom they're sharing the bill: 'Hey, kids,' sneers John, coming across Lionel Blair rehearsing with some plumed chorines, 'why don't we do the show right here?' But the conventions of the traditional Hollywood musical were at least broadly effective: my God, they even made Glenn Miller a movie star. Rock films ditched the old conventions only to have a harder job finding new ones. But here Lester establishes the crosscutting techniques MTV relies on to this day: if your club-footed rockers can't move, get the cameras to dance in their place. The famous opening sequence — of bobbies and dolly birds pursuing the group down a London street — was lovingly pastiched in the title sequence of Austin Powers. But Mike Myers chose to use mostly non-rock stuff to evoke the era — Quincy Jones's

Against that must be set the Beatles themselves, four natural actors playing themselves with a cheeky knowingness: 'What,' asks a reporter, 'would you call that hairstyle you're wearing?' 'Arthur,' replies George. Unlike the self-important rockers who followed, they and British pop were young enough to have a lark — for in the fullness of life, as Ringo sagely points out, 'Being middle-aged and old takes up most of your time.' Supporting the quartet are a platoon of great British character actors playing a wonderful range of lost stereotypes — Richard Vernon with brolly and bowler en route to the city CI fought the war for your sort'), Deryck Guyler as the police sergeant, Robin Ray as the floor manager. Victor Spinetti has a terrific time as the temperamental TV director who dreads being exiled to doing the news in Welsh. I've only ever met Victor Spinetti once. He said, 'Love the column, Mark.' It was a bad time for me, and I didn't actually have a column. But somehow the absence of any column only made Victor's alleged enjoyment of it all the more touching. In that spirit, despite my indifference to the songs and the ill-advised close-ups of Ringo's drumming, I'm happy to return the compliment: loved the film, Victor!