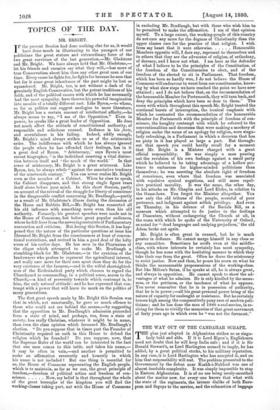 IF the present Session had done nothing else for us, it would have done much in illustrating to the youngest of our politicians the great stature and extraordinary force of the two great survivors of the last generation,—Mr. Gladstone and Mr. Bright. We have always held that Mr. Gladstone,— let his friends and enemies say what they will,—has more of true Conservatism about him than any other great man of our time. Every cause he fights for, he fights for because he sees that but for it some great inheritance of the past might be lost or squandered. Mr. Bright, too, is not without a dash of the genuinely English Conservative, but the potent traditions of his faith, and of the political causes with which he has necessarily had the most sympathy, have thrown his powerful imagination into moulds of a totally different cast. Like Byron,—to whom, so far as politics can suggest analogies to mere literature, Mr. Bright has a certain amount of intellectual affinity,—he always seems to say, "I am of the Opposition." Even in power, he speaks like a great leader of Opposition. He does not much affect the attitude of constitutional authority, of responsible and solicitous counsel. Defiance is his forte, and scornfulness is his failing. Indeed, oddly enough, Mr. Bright's mind always strikes us as of the aristocratic order. The indifference with which he has always ignored the people when he has offended their feelings, has in it a great deal of Byron. " Aristocracy," says Byron's most recent biographer, " is the individual asserting a vital distinc- tion between itself and 4 the muck of the world.' " In that sense of aristocracy, Mr. Bright is a great aristocrat. Like Byron, too, he always rebels " against the associative tendency of the nineteenth century." You can never realise Mr. Bright even as the member of a Cabinet. When he rises to speak, the Cabinet disappears, and that strong single figure rears itself alone before your mind. In this short Session, partly on account of the revival of the struggle for liberty of conscience in the disagreeable conflict concerning Mr. Bradlaugh,—partly as a result of Mr. Gladstone's illness during the discussion of the Hares and Rabbits Bill,—Mr. Bright has reasserted all his old influence with something more even than his old authority. Formerly, his greatest speeches were made not in the House of Commons, but before great popular audiences, where he felt freer from the annoying restraints of Parliamentary convention and criticism. But during this Session, it has hap- pened that the nature of the particular questions at issue has liberated Mr. Bright from the consciousness at least of conven- tional restrictions, and revived in him a good deal of the lofty acorn of his earlier days. He has seen in the Pharisaism of the clique which attempted to make Mr. Bradlaugh a stumbling-block for Mr. Gladstone,—in the cynicism of the landowners who profess to represent the agricultural interest, and really care more for their own sport than they do for the very existence of the farmers,—and in the wilful shortsighted- ness of the Ecclesiastical party which chooses to regard the Churchyard as commanding, in a political sense, access to the Church,—a kind, of perversity towards which contempt is, to him, the only natural attitude ; and he has expressed that con- tempt with a power that will leave its mark on the politics of many generations.

The first great speech made by Mr. Bright this Session was that in which, not unnaturally, he gave so much offence to those who could not see behind the scenes,—by suggesting that the opposition to Mr. Bradlaugh's admission proceeded from a state of mind, and perhaps, too, from a state of society, less really Christian, whatever it might be in name, than even the class opinion which favoured Mr. Bradlaugh's election. " Do you suppose that in times past the Founder of Christianity required an oath in this House to defend the religion which he founded? Do you suppose, now, that the Supreme Ruler of the world can be interested in the fact that one man comes to this table, and takes his name,— it may be often in vain,—and another is permitted to make an affirmation reverently and honestly in which his name is not included ? But one thing is essential for us, the House of Commons representing the English people, which is to maintain, as far as we can, the great principle of freedom,—freedom of political action and freedom of con- science Now, my belief is that throughout the whole of the great boroughs of the kingdom you will find the working-classes taking part, not with the House of Commons in excluding Mr. Bradlaugh, but with those who wish him to be permitted to make the affirmation. I am of that opinion myself. To a large extent, the working-people of this country do not care any more for the dogmas of Christianity than the • upper classes care for the practice of that religion. I wish.

from my heart that it were otherwise Honourable Members opposite will, I dare say, represent to themselves and to others that they are the advocates of religion, of orthodoxy,. of decency, and I know not what. I am here as the defender of what I believe to be the principles of the Constitution, of the freedom of the Constituencies to elect, and of the freedom of the elected to sit in Parliament. That freedom, which has been so hardly won, I do not believe the House of Commons will endeavour to wrest from our constituencies, know- ing by what slow steps we have reached the point we have now attained ; and I do not believe that, on the recommendation of the honourable Member for Portsmouth, they will tarn back, and deny the principles which have been so dear to them." The scorn with which throughout this speech Mr. Bright treated the continual bursts of interruption, the ironical emphasis with which he contrasted the recommendation of the honourable Member for Portsmouth with the principle of freedom of con- science, the haughty contempt with which he referred to the conventionalities and decorums that were making a mockery of religion under the name of an apology for religion, were singu- larly refreshing, in a Parliament in which a decorum that has no piety in it has played so large a part. But through- out that speech you could hardly recall for a moment that Mr. Bright is a Minister charged with a great, official responsibility. He was simply a man pouring out the revulsion of his own feelings against a small party which he believed to be taking advantage of a hollow pre- tence to embarrass far higher-minded politicians than themselves ; he was asserting the absolute right of freedom- of conscience, even where that freedom was associated with repulsive cynical negations, and still more repul- sive practical morality. It was the same, the other day, in his attacks on Mr. Chaplin and Lord Elcho, in relation to the Game-laws. You forgot the Minister altogether. You saw only the old tribune of the people, scornful of poor pretences, and indignant against selfish privilege. And even on Thursday, in his defence of the Burials Bill, as a measure which attempted to do justice to the feelings of Dissenters, without endangering the Church at all, in the scorn with which he spoke of the University of Oxford,: as noted for " dead languages and undying prejudices," the old Adam broke out again.

Mr. Bright is often great in counsel, but he is much greater in defiance. He cannot merge himself in any class or any committee. Sometimes he scoffs even at the middle- class, with whose interests he certainly has most sympathy, though he has none with the hesitating manner in which they take their cue from the great. Often he dares the aristocracy to resist justice. Now and then, he pours his scorn on what he thinks the unreasonable prepossessions of the working-class. But like Milton's Satan, if he speaks at all, he is always great, and always in opposition. He cannot speak to show the ad- vantages of what he admires. He is only kindled by the mean- ness, or the pettiness, or the insolence of what he opposes. You never remember that he is in possession of authority, that he is in power ;—all his great personal power being of the nature of capacity for onslaught or resistance. But he certainly towers high among the comparatively puny race of modern poli- ticians ; and he has done the men of 1880 a real service, in re- viving for them so vividly the memories of that great movement , of forty years ago in which even he "was not the foremost."