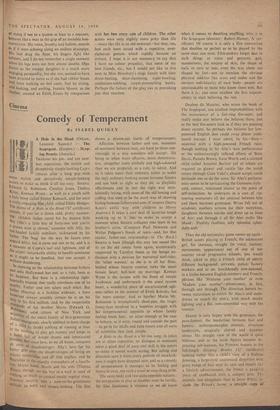 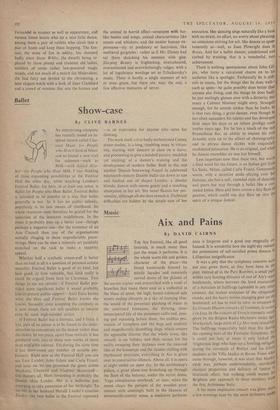 By ISABEL QUIGLY A Hole in the Head. (Odeon, Leicester Square.) -- The

c lug Beauty. (Astoria.) Att.ING his pre- and not post-

0 i o war reputation, the stylish and

°' returns after a long gap with some stylish and deceptively simple-looking actors to make us think it all too easy : Sinatra, Edward G. Robinson, Carolyn Jones, Thelma Ritter, Keenan Wynn : as well as a youth with a hula hoop called Jimmy Komack, and for once a really engaging film child, called Eddie Hodges. The he theme of A Hole in the Head ('U' certificate) sounds, if you set it down cold, pretty nauseat- ing: childish father cared for by mature little bo), ('He's a little boy of forty-one and you're a grown man at eleven,' someone tells Ally, the red-headed family stabiliser, nicknamed by his father 'The Nag' for the way he fusses over unpaid bills); but it turns out not to be, and it is a measure of Capra's tact and lightness, and of the actors' remarkable ability to handle sentiment as it ought to be handled; that one accepts it Without shuddering. In showing us the relationship between fathers and sons Hollywood has not, as a rule, been at its • ts 1, aPPiest. But here is a relationship light- heartedly treated, that really convinces one of its quality. Father and son adore each other. But bankrupt (Sinatra) is a feckless widower, a born :nkrupt always amiably certain he is on his stall to his first million, and by the respectable itellb(.1ards of his brother Mario (Edward G. on! inson). solid citizen of New York and Italian of the entire family of first-generation Ian iMmigrants, clearly unfitted to have charge of a child

a hotel full of bongo drumsand intoxicated blondes. But since love, as we all know, conquers all sorts

fat her of disadvantages, Ally's love for his gets over the disadvantages of living on salami sandwiches and all that implies, and he

nourishes in the crumby atmosphere of a fourth- rate Miami hotel. Mario and his wife (Thelma Ritter), though, see the boy as a waif in need of nothing so much as cooked meals, regular sleep, financial security and a nose-to-the-grindstone attitude to work and money-making. The film

shows a drawn-out battle of temperaments.

Affection between father and son, moments of sentiment between men, are hard to show con- vincingly in a way outsiders will accept : life being so often more effusive, more demonstra- tive, altogether more unlikely and high-coloured than we are prepared, as a rule, to admit. And so it takes more than ordinary talent to make the very ordinary-looking scenes between Sinatra and son look as right as they do, as playfully affectionate and in just the right way unin- hibitedly loving, with none of the old boxing and cuffing that used to be the stock way of showing feeling between fathers and sons. (Compare Danny Kaye's awful way with ,children in Merry Andrew.) It takes a rare deal of accurate tough working up to it, too, to make us accept a moment when Sinatra collapses into tears in his brother's arms. (Compare Paul Newman and Walter Pidgeon's •floods of tears—and, for that matter, father-son relationship—in The Rack.) Sinatra is back (though this may not sound like it) on his old comic form again, eccentrically supported by Carolyn Jones as the bongo en- thusiast with a passion for nocturnal surf-rides, the 'other woman,' as she is in all her films, behind whose bizarre exterior lurks the usual female heart, hell-bent on marriage. Keenan Wynn is the tycoon with the front of simple bonhomie and underneath it the usual tycoon heart, a wonderful piece of uncaricatured ugli- ness rather in the manner of Ernie Kovaks, but far more sinister. And as brother Mario Mr. Robinson is triumphantly dead-pan. the tragic funny-face involved in a hopeless struggle with his temperamental opposite to whom family feeling binds him : an actor enough at his ease to behave, as it were, round and outside the part —to go in for bluffs and false fronts and all sorts of subtleties that look simple.

A Hole in the Head is a bit too long; its jokes are at times repetitive, its dialogue at moments takes a good deal of pace and skill in the actors to make it sound worth saying. But acting and direction save it from every pothole of mawkish- ness it might have dropped into; and as a comedy of temperament it manages to be feeling and funny at once, not such a usual or easy thing to be.

The same body and two quite opposite natures: the temptation to play at doubles must be terrific. Sir Alec Guinness, a virtuoso as we all know

when it comes to doubling anything, tries it in The Scapegoat (director : Robert Hamer; 'A' cer- tificate). Of course it is only a film convention that doubles so perfect as to be played by the same man can exist. Film-makers forget that in such things as voice and gestures, gait, mannerisms, the texture of skin, the shape of nails or ears or toes, even the way shoes are shaped by feet—not to mention the obvious physical oddities like scars and moles and the obvious individuality of each body—people are unmistakable to those who know them well. But there it is : you must swallow the first improb- ability to start believing the rest.

Daphne du ,Maurier, who wrote the book of The Scapegoat, can swallow improbabilities with the insouciance of a fair-ring fire-eater, and really make one believe she believes them, just as the best fire-eaters look as if they are popping down oysters. So perhaps she believes her low- powered English don could swap places unde- tected (except, I must admit, by his—their- mistress) with a high-powered French rake; though nothing in Sir Alec's wan performance or the embarrassingly inflated efforts of Bette Davis, Pamela Brown, Irene Worth and a talented child called Annabel Bartlett (all of whom are required to glower and cackle like the weird sisters through Gore Vidal's absurd script) could persuade one to do the same. Sir Alec's perform- ance seems to be caricaturing the Guinness style : cold, correct, restrained almost to the point of self-extinction, he underacts in a cast of rip- roaring overactors till the contrast between him and them becomes grotesque. Wives fall out of windows, mothers scream for their morphine, daughters threaten suicide and dress up as Joan of Arc; and through it all Sir Alec stalks like Maud : 'Faultily faultless, icily splendid, splen- didly null.'

Then the old nationality game comes up again : British actors playing at French, the adolescent girl, for instance, straight (in voice, manner, movements, appearance) out of one of our smarter co-ed progressive schools, you would think, asked to play a French child of utterly different background; servants, police, factory workers and so on, bewilderedly non-national, in a limbo between English manners and French; phrases like 'Madame your mother' or even 'Madam your mother'—phoneyness, in fact, through and through. The direction hovers be- tween naturalism to match Sir Alec's and melo- drama to match the plot's, with much murky lighting and a flat, non-committal way with the loonies.

Disney is only happy with the grotesque, the para-human, the borderline between fact and fantasy: anthropomorphic animals, vivacious landscapes, magically altered and dynamic things. His straight view of the world is quite hideous: and so the main figures become de- pressing sub-humans, his Princess Aurora in the full-length Sleeping Beauty ('U' certificate) looking rather like a child's view of a fashion drawing, a large-eyed anatomical distortion with great bangs of hair over its eyes and mouth like a lipstick advertisement, the Prince a gangling piece of cardboard with a campus grin. Th animals, less ubiquitous than in Snow White, in- 'elude the Prince's horse, a straight copy of Fernandel in manner as well as appearance, and various forest beasts who do a neat little dance, among them a pair of rabbits who climb into a pair of boots and keep them hopping. The fan- tasy, the sense of fun in oddity, has slumped badly since Snow White, the dwarfs being re• placed by three plump and tiresome old ladies, wielders of some rather low-powered magic wands, and not much of a match for. Malevolent, the bad fairy not invited to the christening, a lean elegant witch with a look of Joan Crawford and a crowd of minions that mix the human and the animal to horrid effect—creatures with bat- like bodies and wings, animal characteristics like snouts and whiskers, and the nastier human ex- pressions—sly or predatory or lascivious, like mediaeval gargoyles: rather as if Mr. Disney had sat there sketching his enemies with glee. Sleeping Beauty is frightening, overcoloured, overanimated and overwhelmingly vulgar, with a lot of lugubrious wordage set to Tchaikovsky's music. There is hardly a single moment of wit or even grace, but there are, near the end, a few effective moments of terror.