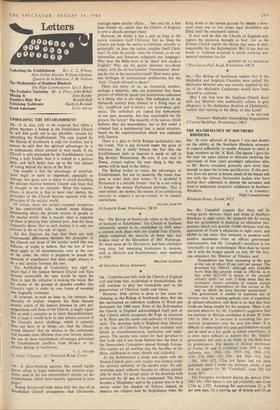 SIR, — Catholics can only wish the Church of England well and

hope that, established or disestablished, she will continue to play her formidable part in the preservation of Christian truths and values.

However, little service is done to her cause by claiming, as the Bishop of Southwark does, that she has maintained an unbroken tradition of Word and Sacrament for 1400 years. Prior to the Reformation the Church in England acknowledged itself pad of that Church which recognises the Pope as successor to St. Peter and the centre and authority of Christian unity. The doctrines held in England were identical to the rest of Catholic Europe and included such beliefs as transubstantiation, confession and indul- gences. The people were noted for their devotion to Our Lady and it was from Oxford that the feast of the Immaculate Conception spread through Europe. The central act of worship was the Sacrifice of the Mass, celebrated in every church and cathedral.

At the Reformation a break was made with the Roman Church and a new society was formed under the spiritual authority of the secular ruler. To ack- nowledge papal-authority became an offence punish- able by death. To accept many of the doctrines held previously by all was to be condemned. The Mass became a 'blasphemy' and to be a priest was to be a traitor under the shadow of Tyburn. Indeed, to practice the religion held by Englishmen from the

King down to the lowest peasant for nearly a thou- sand years was to live under legal disabilities not lifted until the nineteenth century.

It may well be that the Church of England now regrets the pressures brought to bear, just as the Roman Church regrets the abuses that were, in part, responsible for the Reformation. But to say that no break in tradition occurred is surely carrying ecu- menical optimism too far.