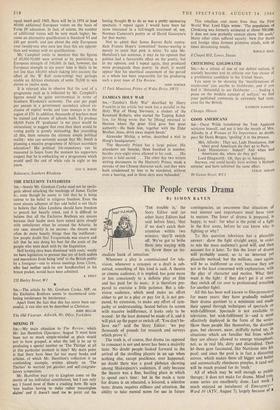 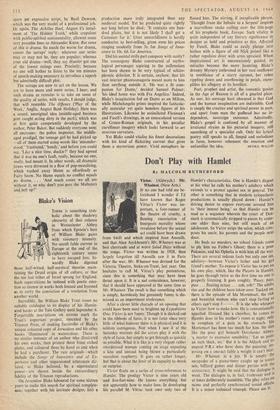 The People versus Drama

Whenever a play is commissioned for tele- vision, whenever a synopsis or a draft is sub- mitted, something of this kind is said. A theatre • or cinema audience, it is implied, has gone more or less consciously to a definite play or film and has paid for its seats : it is therefore pre- pared to exercise a little patience. But a tele- vision audience, which need make no effort either to get to a play or pay for it, is not pre- pared, by extension, to make any effort of sym- pathy or understanding. Seated before its screen with massive indifference, it looks only to be wooed: let the least demand be made of it, and it will pick up the paper or switch off. 'You don't be- lieve me?' said the Story Editor: 'we pay thousands of pounds for research and surveys which prove it.'

The truth is, of course, that drama (as opposed to romance) is not and never has been a majority taste. No doubt people looked forward to the arrival of the strolling players in an age when nothing else, except pestilence, ever happened; no doubt there was a good plebeian showing among Shakespeare's audiences, if only because the theatre was a fine, bustling place in which to spend one's time: but in the main a taste for drama is an educated, a leisured, a selective taste; drama requires stillness and attention, the ability to take mental notes for use in future contingencies, an awareness that situations of real interest and importance must have time to mature. The lover of drama is prepared, is happy, to wait : for what is the point of a fight in the first scene, before he can know who is fighting or why? To this question television has a plausible answer: show the fight straight away, in order to win the mass audience's good will, and then account for it later. To this the lover of drama will probably assent, as to an inverted Yet plausible method; but the millions, once again, will be as indifferent as ever, because they are not in the least concerned with explanation, with the play of character and motive. What they want is the fight: if they don't get it at once, they switch off (or over to professional wrestling for another fight). All this has been well known to film-promoters for many years; they have gradually reduced their drama quotient to a minimum and made their appeal through techniques of spectacle or wish-fulfilment. Spectacle is not available to television; but wish-fulfilment is—and is most effectively deployed in the form of the series. Show them people like themselves, the doctrine goes, but cleverer, nicer, skilfully tarted up,.111 situations which are familiar but from which they are always allowed to emerge triumphant, not, as in real life, dirty and discredited. Then let them gaze fascinated, like Narcissus into his pool; and since the pool is in fact a distorting mirror, which makes them all bigger and better and automatically eliminates pimples, it (and we) will be much praised for its 'truth.' All of which may be well enough as public therapy; it does not make for drama. Mind you, some series are excellently done. Last week I much enjoyed an instalment of Emergency-- Ward 10 (ATV, August 7), largely because of $

spare yet expressive script, by Basil Dawson, which was the very model of a professional job. Or again, The Achilles Heel, August 6's instal- ment of 'The Hidden Truth,' while crapulent with public-spirited sentimentality, allowed some very passable lines to Alexander Knox. But none of this is drama. So much the worse for drama, comes the satraps' reply: whatever our series may or may not be, they are popular; whereas your old drama—well, they say Hamlet got one of the lowest ratings ever. Precisely; because no one will bother to listen to the ten minutes of speech-making necessary to introduce a superb . but admittedly difficult plot. The satraps are now to act on the lesson. We are to have more and more series, I hear, and such drama as remains is to take on some of the quality of series, with results, I should judge, that will resemble The Offence (Play of the Week,' Anglia, August Bank Holiday). Here was a sound, unoriginal idea (middle-aged business gent caught acting dirty in the park), which was at first quite competently developed by the author, Peter Baker. But suddenly everyone went all unctuous: the police inspector, the middle- aged prodigal, the teenage girl he had picked up —all of them started using words like 'misunder- stood,' frustrated,"lonely,' and before you could say, 'Like a nice time, duckie?' they had agreed that it was no one's fault, really, because no one, really, had meant it. In other words, all dramatic issues were drowned in a flow of pop-moralising, which washed away blame as effortlessly as Fairy Snow. No blame equals no conflict equals no drama. . . . 'And much cosier we all are without it, so why don't you pass the Maltezers and belt up?'