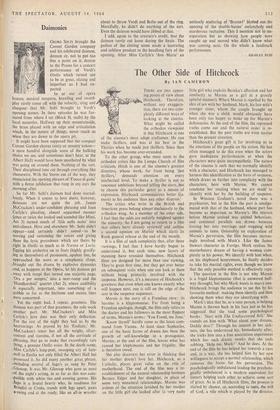 GEORG SOLT) brought the Covent Garden company and his celebrated daimon, demon or, not to put too fine a point on it, demon to the Proms for a concert performance of Verdi's Otello which turned out to be as great, elating and imperfect as I had ex-

In or out of opera houses, musical tempests, brawling and sword- play rarely come off with the velocity, sting and clangour that Mr. Solti brought to Verdi's opening scenes. In these episodes he was fav- oured from where I sat (Block H, stalls) by the local acoustics. Halfway up their mountainside, the brass played with an edge and articulation Which, in the nature of things, never reach us when they are down in the opera pit. • It might have been supposed that the compact Covent Garden chorus (sixty or seventy voices— a mere handful alongside some of the hulking choirs we see, and sometimes don't hear, at the Albert Hall) would have been smothered by what was going on around them. Nothing of the sort. Their disciplined tone cut through everything like cheesewire. With the Storm out of the way, they enunciated the opening phrases of `Fuoco di gioia' With a fierce jubilation that rang in my ears the morning after.

So far Mr. Solti's daimon had done marvel- lously. When it comes to love duets, however, daimons are not quite the job. James McCracken's under-confident phrasing and Joan Carlyle's pleading, almost anguished manner (once or twice she looked and sounded like Mimi, , Act 3) turned much of `Già nella notte' into anti-climax. Here and elsewhere Mr. Solti didn't • appear—and certainly didn't sound—to be

nursing and sustaining the voices and giving them the lyric precedence which are theirs by right in Otello as much as in Norma or Lucia. Egging his orchestra on to feats (highly gratify- ing in themselves) of passionate, opulent line, he approached the score, as a symphonic tissue, brought out the drama by explosive dynamics and, as happens at the Opera, let his daimon get away with tempi that turned one majestic page, 'Ora e per sempre,' into a near-romp and the 'Handkerchief' quartet (Act 2), where audibility is especially important, into something of a gabble so far as the baritone and mezzo lines Were concerned.

• 'Yet the night had, I repeat, greatness. The daimon was part of that greatness; the solo work another part. Mr. McCracken's and Miss Carlyle's love duet was their only deflection. • For the rest of the night they had us by the heartstrings. As proved by his 'Esultate,' Mr. McCracken's tenor has all the weight, silver- content and stamina, if not all the certitude of Phrasing, that go to make that exceedingly rare thing, a genuine Otello voice. In the death scene, Miss Carlyle's long-pent, swooping cry of fare-

• Well to Emilia not only filled the Albert Hall but ,Possessed it. So did many another great, phrase, "including several of Iago's as sung by Peter

• 'Glossop. It was Mr. Glossop who gave us most • of the night's acting, in so far as this was com- Patible with white ties and evening gowns. His • .Iago is a brutal hearty who, in readiness for Brindisi or Credo, stands with legs apart, paws a-swing and at the ready, like an all-in wrestler about to throw Verdi and Boito out of the ring. Mercifully, he didn't do anything of the sort. Even the daimon would have jibbed at that.

I add, again to the creature's credit, that the daimon rarely cut loose during the finale. The pathos of the closing scene made a lacerating and sublime pendant to the headlong fury of the opening. After Miss Carlyle's 'Ave Maria' an untimely scattering of 'Bravos!' blotted out the opening of the double-basses' melancholy and murderous recitative. This I mention not in ex- asperation but as showing how people were caught up and moved who didn't know what was coming next. On the whole a landmark performance.