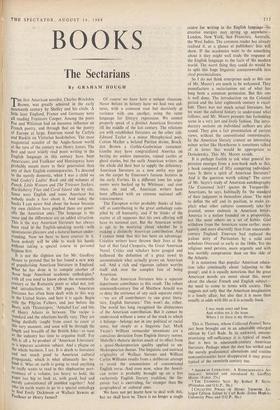 rri im first American novelist, Charles Brockden Brown, was greatly admired in the early nineteenth century by Shelley and his circle. A little later England, France and Germany were all reading Fenimore Cooper. Among the poets Poe and Whitman had an immense influence on French poetry, and through that on the poetry of Europe at large. Emerson stood by Carlyle and Ruskin on Victorian bookshelves. The most magisterial novelist of the Anglo-Saxon world at the turn of the century was Henry James. The best and most widely read poets writing in the English language in this century have been Americans; and Faulkner and Hemingway have probably meant more to their generation than any of their English contemporaries. To descend to the merely domestic, when I was a child we read Godey's Ladies' Book and old volumes of Punch, Little Women and The Treasure Seekers, Huckleberry Finn and Coral Island side by side. Some were English and some American but nobody made a fuss about it. And today the books I can never find about the house because my own children have pinched them are gener- ally the American ones. The language is the same and the differences are an added attraction. This is the way American literature has always been read in the English-speaking world—with sPontaneous pleasure and a natural human under- standing. Now we have to have courses in it. Soon nobody will be able to wash his hands Without taking a special course in personal hygiene first.

It is not the slightest use for Mr. Geoffrey Moore to pretend that he has found a new way of popularising American literature in England. What he has done is to compile another of those huge American academic anthologies,* With all you need to know about the seventeenth century or the Romantic poets or what not, text and introductions, in 1,300 pages. American literature has often been dealt with in this way in the United States, and here it is again. Begin With the Pilgrim Fathers, end just before the seats, with Thanatopsis,"Annabel Lee' and bits Of Henry Adams in between. The recipe is standard and the selections hardly vary. They are being dutifully taught from coast to coast at this very moment, and soon will be through, the length and breadth of the British Isles—as soon as the industry has time to organise itself. For this is all a by-product of 'American Literature' as a separate academic subject. And a plague on the whole business, I say. It is death to literature and not much good to American cultural Propaganda, which is what ultimately lies be- hind it. Who on earth is going to read anything he really wants to read in this elephantine port- olanteau of a volume, too heavy to hold, the Pages too big to look at, with good, bad and Merely conventional all jumbled together? And Who on earth wants to go to a special anthology to find Emily Dickinson or Wallace Stevens or Faulkner or Henry James? Of course we have here a unique situation. Never before in history have we had two cul- tures, with a common root but decisively a3 variance with one another, using the same language for literary expression. We cannot properly speak of a distinct American literature till the middle of the last century. The relations are with established literature on the other side. Edward Taylor is a minor Metaphysical poet, Cotton Mather a belated Puritan divine, Brock- den Brown a Gothic-Godwinian romancer. Goethe may have congratulated America on having no useless memories, ruined castles or ghost stories, but the early American writers on the whole did their best to supply the deficiency. American literature as a new entity was pot on the carpet by Emerson's famous lectures in the early Forties. In a different tone his argu- ments were backed up by Whitman: and ever since, on and off, American writers have been afflicted with an extreme national self- consciousness.

The European writer probably thinks of him- self as contributing to the great anthology com- piled by all humanity, and if he thinks of the matter at all supposes that his own offering will have its national cast. But the American writer is apt to be worrying about whether he is making a distinctly American contribution. And I cannot think that this has been an advantage. Creative writers have thrown their lives at the feet of that fatal Cleopatra, the Great American Novel. Critics and scholars have gouged and hollowed the definition of a great novel to accommodate what actually grows on American soil. And a rich and vigorous culture worries itself sick over the complex fate of being American.

To shut American literature into a separate department contributes to this result, The robust nineteenth-century line of Matthew Arnold was to deny, the existence of any such separate entity —'we are all contributors to one great litera- ture, English literature.' This won't do, either. The world has long recognised the distinctness of the American contribution. But it cannot be understood without a sense of the stock to which it belongs—belongs not in any political or racial sense, but simply as a linguistic fact. Mark Twain's brilliant vernacular inventions are a conscious deviation from English literary norms. Melville's rhetoric derives much of its effect from a quasi-Shakespearian quality applied to un- Shakespearian themes. The linguistic and metrical originality of Wallace Stevens and William Carlos Williams results from a deliberate attempt to avoid the automatisms of conventional English verse. And even now, when the Ameri- can writer is probably brought up on a less exclusively English literary tradition, the lin- guistic fact is overriding, far stronger than the geographical or cultural ones.

We have not yet learnt how to deal with this, but we shall have to. There is no longer a single centre for writing in the English language—Its creative energies may spring up anywhere— London, New York, San Francisco, Australia, the West Indies. The common reader has already realised it, as a glance at publishers' lists will show. If the academies want to do something about it they might well study the response of the English language to the facts of the modern world. The worst thing they could do would be to split this huge linguistic commonwealth into rival provincialisms.

So I do not think enterprises such as this one of Mr. Moore's are much to be welcomed. They manufacture a sectarianism out of what has long been a common possession. But this one is well done. The introduction on the Colonial period and the later eighteenth century is excel- lent. There was not much actual literature, but we want the cultural history to understand what follows; and Mr. Moore presents this forbidding scene in a very just and lively fashion. The intro- ductory sections on individual authors are also sound. They give a fair presentation of current views, without the conventional overestimates. In the American literary context an interesting minor writer like Hawthorne is sometimes talked of in terms that would be appropriate to Dostoievsky. This Mr. Moore avoids.

It is perhaps foolish to ask what general im- pression emerges from a non-book such as this, a book composed of fifty competing individual- isms. Is there a spirit of American literature? And is the question worth asking? The cover of Mr. Sayre's study of American autobiography The Examined Selft quotes de Tocqueville Americans, he says, habitually fix 'the standard of their judgment in themselves alone.' The need to define the self and its position, to make ex- plicit what other cultures commonly take for granted, seems endemic in American letters. America is a nation founded on a proposition, not like most others on a set of habits. God withdrew from the American scene earlier, more quietly and more discreetly than from nineteenth- century England. Emerson had replaced •the jealous deity of Puritanism by a mild and nebulous Oversoul as early as the 1840s. Yet the religious need persists, more urgently and With less worldly compromise than on this side of the Atlantic.

It is notorious that popular American educa- tion talks continually about 'adjusting to the group'; and it is equally notorious that the great American novels are never about this, never about the classic French and English subject— the need to come to terms with society. This suggests not only that the American imagination is a lonely affair, but also that it is more than usually at odds with life as it is actually lived.

Where I sit there is my throne.

This is Thoreau, whose Collected Poemst have just been brought out in an admirable enlarged edition by Carl Bode. In its awkward, uncom- promising self-sufficiency it is typical of much that is best in nineteenth-century American literature. Perhaps when the dust has settled and the merely professional alienations and routine noncomformities have disappeared it may prove typical of the twentieth century too, * AMERICAN LITERATURE: A REPRESENTATIVE AN- tHoLo0Y. Selected and introduced by Geoffrey 1