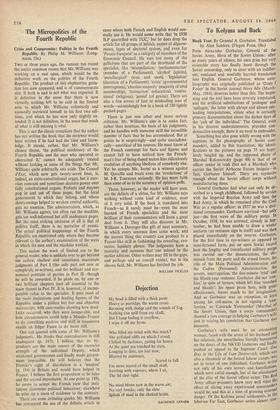 The Micropolitics of the Fourth Republic

Two or three years ago, the rumour ran round the senior common rooms that Mr. Williams was working on a vast opus, which would be the definitive work on the politics of the Fourth Republic. The product of this elephantine gesta- tion has now appeared, and is of commensurate size. It both is and is not what was expected. It is definitive in the sense that there is now virtually nothing left to be said in the limited area to which Mr. Williams voluntarily and avowedly restricted himself in his first two edi- tions, and which he has now only slightly ex- tended. It is not definitive, in the sense that much of what is still missing is vital.

This is not the classic complaint that the author has not written the book that the reviewer would have written if he had had the time and know- ledge. It means, rather, that Mr. Williams's chosen theme, 'the political machinery of the Fourth Republic and the men who operated or obstructed it,' cannot be adequately treated without looking at some of the things that Mr. Williams quite arbitrarily sets aside. The Conseil d'Etat, which now gets twenty-seven lines, is, indeed, an extra-constitutional organ, but it exer- cises constant and sometimes decisive power over fully constitutional organs. Prefects and mayors pop in and out of these pages, but the local government to which they belong, and whose shortcomings helped to weaken central authority, gets no mention. The administration, which, as Mr. Williams agrees, too often ran the machine, gets ten well-informed but still inadequate pages. But the most striking omission of all is that of politics itself; there is no narrative of events. The actual political happenings of the Fourth Republic are mentioned only where they become relevant to the author's examination of the ways in which the men and the machine worked.

This makes the work of limited use to the general reader, who is unlikely ever to get beyond the callow, shallow and sometimes inaccurate judgments of Part I (the only part not new or completely re-written), and the brilliant and eco- nomical portraits of parties in Part II—though he will be rewarded, if he plods on, by one or two brilliant chapters (not all essential to the main theme) in Part IV. It is, however, of incom- parable value to the specialist. It puts most of the main institutions and leading figures of the Republic under a pitiless but fair and objective microscope, with case-studies showing how dead- locks occurred, why they were insuperable, and how circumstances could help a Mendes-France to do something positive and skill in manceuvre enable an Edgar Faure to do more still.

One can quarrel with some of Mr. Williams's judgments. He thinks that centralisation is still inadequate (p. 347); I believe that its by- products are the main source of the excessive strength of the individual Deputy, which weakened governments and finally made govern- ment impossible. He still believes that the Premier's right of dissolution is a 'weapon' (p. 184) in Britain and would have helped in France; I believe the first proposition to be false and the second improbable. At one point (p. 189), he seems to accept the French view that insti- tutions determine political behaviour; elsewhere he piles up a mass of evidence to the contrary.

There are some irritating quirks. Mr. Williams has renounced the use of the definite article in

cases where both French and English would nor- mally use it. He would never write that 'in 1930 ILP quarrelled with TUC,' but he does drop the article for all groups of initials, names of ddparte- ments, types of electoral system, and even for 'Pens& francaise' as a category of members of the Economic Council. He uses too many of the gallicisms that are part of the shorthand of the specialist, like 'interpellation,"parliamentarian' (member of a Parliament), 'alcohol' (spirits), 'metallurgical' (iron and steel), 'legislation' (duration of a Parliament), 'crisis' (governmental interregnum), 'absolute majority' (majority of total membership), 'instruction' (education), 'confes- sional' (religious), 'genial' (of genius). There are also a few errors of fact or misleading uses of words—astonishingly few in a book of 550 tightly packed pages.

There is just one other and more serious criticism. Mr. Williams's aim is to make fact, rather than intuition, the basis of his judgments, and he handles with immense skill the incredible number of facts that he has accumulated. But at points be is surprisingly—and quite unacademi- cally—uncritical of his sources: He must know of the French contempt for facts and figures and cannot fail to have noticed how the French- man's fear of being duped makes him ridiculously credulous of anything libellous of somebody else. Yet he accepts Me. Isorni as a witness against M. Queuille and treats even the 'revelations' of M. J-R. Tournoux seriously. He has more faith than some of us in the accuracy of opinion polls.

Those, however, as the reader will have seen, are the defects of a virtue, for Mr. Williams Says nothing without some kind of evidence, most of it very solid. If the book is translated into French—as it surely must be—even the most learned of French specialists and the most brilliant of their commentators will learn a great deal from it. They will also discover in Mr. Williams a Duverger-like gift of neat summary, in which every sentence does some work, and the nearest thing this country can produce to a Fauvet-like skill in fashioning the revealing, evo- cative, lapidary phrase. The judgments have a maturity and sureness that one missed in the earlier editions. Other writers may fill in the gaps, and perhaps add an overall verdict, but in his chosen field, Mr. Williams has finished the job.