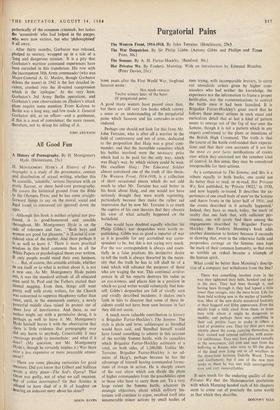 • to the Olympia Press; and he has some straight- forward things to say on the moral, social and • legal issues as canvassed (or ignored) down the ages.

• Although this book is neither original nor pro- found, it is good-humoured and sensible throughout. Mr. Montgomery Hyde is on the Side of tolerance and fun : "'Both boys and Women are good for, pleasure," is [Lucian's] con- sidered view of the matter. And there perhaps it is as well to leave it.' There is more practical Wisdom in this brief comment than in all the White Papers or psychological theses ever written. It only people would mind their own business.

° There are some pleasing curiosities for good measure. Did you know that Gilbert and Sullivan Wrote a dirty piece—The Sod's Opera? That Plum was guilty, not of what we call onanism, NI of coitus interruptus? Or that Aretino is alleged to have died of a fit of laughter on hearing an indecent story about his sister?