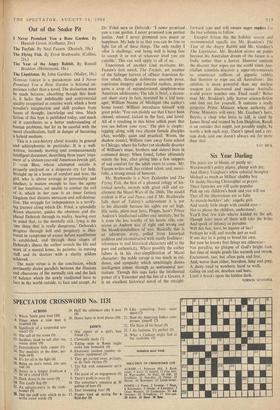 Out of the Snake Pit

The Year of the Angry Rabbit. By Russell Braddon. (Heinemann, 18s.) The Liquidator. By John Gardner. (Muller, 18s.) HANNAH GREEN is a pseudonym and I Never Promised You a Rose Garden is fictional ex- perience rather than a novel. The distinction must be made because, absorbing though this book is, it lacks that indefinable and controversial quality recognised as creative work which a born novelist's imagination and skill produce from layers of thought, knowledge and time. Much fiction of this type is published today, and much of it contributes to a better understanding of human problems, but let us be careful with the novel classification, itself in danger of becoming a hybrid medium.

This is a case-history about insanity in general and, schizophrenia in particular. It is a well- written, intensely moving and compassionately intelligent document, describing three years' treat- ment of a sixteen-year-old American-Jewish girl, D ''orah Blau, whose attempted suicide is Properly analysed as a desperate cry for help. Brought up in a home of comfort and love, the girl, who is above average in personality and intellect, is mature enough to face the agony of her loneliness, yet unable to combat the evil of it, which in her case is an inner fantasy kingdom that dictates• unreason and self-destruc- tion. The struggle for independence is a terrify- ing journey along which Dr. Fried, a splendidly drawn character, guides the obstinate and dis- placed Deborah through to reality, bearing ever in mind that, to the mentally sick, lying is the 'one thing that is really dangerous.' Deborah's Progress through hell and purgatory is illus- trated in symptoms of excess before equilibrium IS established, and through these stages of Deborah's illness the author reveals the life and work of a mental home, its patients, its nursing staff and its doctors with a clarity seldom achieved.

The main virtue is in the conclusion, which Pertinently draws parallels between the illusions and obsessions of the mentally sick and the lack of balance which the newly readjusted have to face in the world outside, to face and accept. As

Experience of another kind motivates Mr. Faasen's first novel, The Toy fair, yet another of the Salinger harvest of offbeat American fic- tion which, through deliberate uncouth prose, capricious imagery and fanciful realism, propa- gates a crop of misunderstood simpleton-wise American adolescents. The tale is brief, a drawn- out short story in fact, narrated by a kid teen- ager, William Noone of Michigan (the author's home town). William introduces himself with great pride: `You can plainly see that I have been abused, misused, kicked in the face, and loved. All of it resulting in this bitter selfish punk that you see before your eyes.' The plot is simple: tagging along with two chosen female disciples (Ace, worldly, quiet and practical; Worm, the shadow comic), William runs away from school to Chicago, where his father (an alcoholic deserter of William's mum, brothers and sisters) lives in contented decay. When found, father ultimately rejects the boy, after giving him a few snippets of sad comfort for the adult years to come. Mr. Faasen writes well, has evident talent, and, merci- fully, a strong streak of humour.

Mr. 'Brathwaite is a New Zealander and The Flying Fish, the first of a planned trilogy of his- torical novels, records with great skill and ex- citement the Maori Wars of the 1860s. The model evident is War and Peace, and if Mr. Brathwaite falls short of Tolstoy's achievement it is not to his discredit because his sights are set high. His rustic, plain-man hero, Phipps, hasn't Prince Andrew's intellectual calibre and intensity, but he is none the less worthy of his heroic role, con- scious as Andrew was of right and wrong and the bloodymindedness of war. Basically this is an adventure story, pulled from historical archives and reconstructed With manly liveliness: references to real historical characters add to the pace and authenticity. Where possibly the author falters is in his over-simplification of Maori character: the noble savage is too much in evi- dence, and sympathy which unwittingly denies intelligence comes through as sentimental por- traiture. Though this saga lacks the intellectual power of a Youcenar and the fire of a Graves, it is an excellent historical novel of the straight- forward type and will ensure eager readers for the two volumes to follow.

Escapist fiction fits the holiday season and recommended equally are Mr. Braddon's The Year of the Angry Rabbit and Mr. Gardner's The Liquidator. Mr. Braddon scores on points because his Australian dream of the future is a frolic rather than a horror. Humour controls the disaster that wipes out the world when Aus- trialian scientists discover a super-myxomatosis to counteract millions of gigantic rabbits that threaten to wipe out all Australians: this antidote is more powerful than any nuclear weapon yet discovered and makes Australia world power number one. Final result? Better read Mr. Braddon's jolly horror science-fiction and find out for yourself. It contains a really gorgeous Prime Minister whose authority all Prime Ministers will envy. Mr. Gardner's hero, Boysie, a chap who loves to kill, is sired by James Bond and trained by Len Deighton. Result is an outsider that might, just possibly might, be worth a bob each way. There's speed and a cer- tain dash, and one doesn't always ask for more than that.