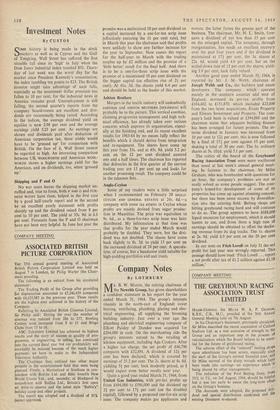 SOME history is being made in the stock markets as well as in Cyprus and the Gulf of Tongking. Wall Street has suffered the first sizeable fall since its 'high' in July when the Dow Jones industrial index touched 851. Thurs- day of last week was the worst day for the market since President Kennedy's assassination, the index tumbling ten points to 823. The British investor might take advantage of such falls, especially as the investment dollar premium has fallen to 10 per cent, for the industrial news in America remains good. Unemployment is still falling, the second quarter's reports from the company board-rooms are excellent and divi- dends are occasionally being raised. According to the indices, the average dividend yield on equities is now 2.98 per cent and the average earnings yield 5.23 per cent. As earnings are shown and dividends paid after deduction of American corporation tax, these yields would have to be 'grossed up' for comparison with British. On the face of it, Wall Street cannot be regarded as high. An interesting comparison between UK WOOLWORTH and American WOOL- WORTH shows a higher earnings yield for the American, and on dividends, too, when 'grossed up.'

Shipping and P and 0 No war scare leaves the shipping market un- ruffled and, true to form, both P AND o and FUR- NESS WITHY have risen, helped in the first case by a good half-yearly report and in the second by an excellent yearly statement with profits sharply up and the dividend raised from 8 per cent to 10 per cent. The yield at 33s. 9d. is 6.1 per cent. Forecasts from the P and 0 chairman have not been very helpful. In June last year the promise was a maintained 10 per cent dividend on a capital increased by a one-for-ten scrip issue (effectively restoring the 11 per cent rate), but in March this year the chairman said that profits were unlikely to show any further increase for the year to September. Now comes the report for the half-year to March with the trading surplus up by £2 million and the promise of a 'little better' result for the final half. And there is to be a one-for-three scrip issue with the promise of a maintained 10 per cent dividend on the bigger capital (an effective rise of 21 per cent). At 41s. 3d. the shares yield 6.4 per cent and should be held as the leader of this market.

Mergers in the textile industry will undoubtedly continue and ASHTON BROTIIERS (HOLDINGS) will probably be in the picture. This vertical combine, claiming progressive management and high tech- nical efficiency, has already taken over various concerns which improve its organisation, especi- ally at the finishing end, and its recent excellent results for 1963-64 by no means fully reflect the benefits which it should derive from integration and re-equipment. The shares have come up this year from 33s. and at 45s. 9d. yield 5.2 per cent on the 12 per cent dividend covered one and a half times. The chairman has reported that deliveries in the first quarter of the current trading year are 15 per cent up and looks for another promising result. The company could be in the takeover lists.

Anglo-Ceylon Some of my readers were a little surprised when I recommended on February 28 ANG LO- CEYLON AND GENERAL ESTATES at 24s. 6d.-a company with some tea estates in Ceylon whose profits are mainly derived from sugar produc- tion in Mauritius. The price was equivalent to 9s. 6d., as a three-for-two scrip issue was later distributed. My information at that time was that profits for the year ended March would probably be doubled. They were, but the divi- dend was not doubled. The shares have come back slightly to 8s. 3d. to yield 15 per cent on the increased dividend of 24 per cent. A specula- tion, of course, but a handsome yield suitable for high-yielding portfolios and unit trusts.