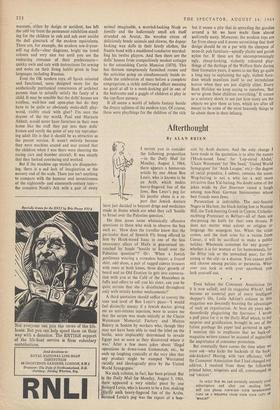 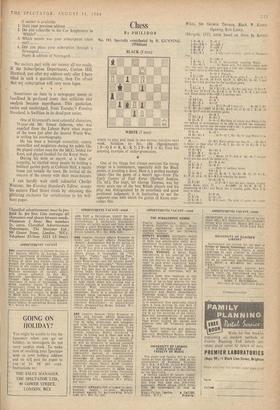 He then poses some whimsically offensive questions to those who wish to observe the ban such as: 'How does the traveller know that the particular dose of Spanish Fly being offered to him by Hook-nosed Isaac in one of the less unsavoury alleys of Haifa is guaranteed un- touched by hands "hostile to Israel over the Palestine question"?' Or: 'When a Jewish gentleman wearing a crownless boater, a frayed shirt, odd shoes, a pair of ragged canvas trousers with rents at both knees, three days' growth of beard and an Old Etonian tie gets into conversa- tion with you at the Café of the Maccabees in Jaffa and offers to sell you his sister, can you be quite certain that she is disinfected throughout only with strictly kosher medicaments?'

A third quotation should suffice to convey the tone and level of Ben Leniv's piece-1 would feel distinctly uneasy if a Jewish doctor, giving me an anti-tetanus injection, were to assure me that the serum was made entirely at the Chaim Weizmann Memorial. Factory and Matzos Bakery in Sodom by workers who, though they may not have been able to read the label on the bottle, were implacably determined to invade Egypt just as soon as they discovered where it was.' After a few more jokes about 'illegal operations in down-town Gommorah, etc., he ends up laughing cynically at the very idea that any product might be stamped 'Warranted raCially and ideologically pure by the United World Synagogues.'

No such column, in fact, has been printed. But in the Daily Mail for Monday, August 3, 1964, there appeared a very similar piece by one Bernaird Levin, who is known to be a Jew, making acty such heavy-fingered fun of the Arabs. Bernard Levin's peg was the report of a boy- cott by Arab doctors. And the only change have made in the quotation is to alter the names ('Hook-nosed Isaac' for `Lop-eared Abdul,' 'Chain Weizmann' for `Ibn Saud,' United World Synagogues' for 'Arab League,' etc.)—the degree of racial prejudice, I submit, remains the same. Wog-baiting is not a whit (or a wit) more attractive than Yid-baiting. No doubt some of the jokes made by Der Stuermer raised a laugh among non-Nazi German businessmen whose best friends were Jews.

Persecution is indivisible. The anti-Semitic Negro in Harlem, the black-hating Jew in Notting Hill, the Turk-hunting Greek in Cyprus, Catholic- mobbing Protestant in Belfast—all of them are sharpening the knife for their own throats. It does not matter what colour or religion or language the scapegoat has. When the crisis comes, and the mob cries for a victim from Caesar, it will be sacrificed to make a public holiday. Wholesale contempt for any group— whether it is for women or for homosexuals, for the filthy rich or the unwashed poor, for the young or the old—is a disease. You cannot pick and choose among pariahs or paranoias. WhO- ever you lock in with your apartheid, you lock yourself out.

Even before the Consumer Association (as it is now called), and its magazine Which?, had become an essential part of every intelligent shopper's life, Leslie Adrian's column in this magazine was devotedly boosting the advantages of such an organisation. At least six years ago, shamelessly plagiarising the Spectator, I wrote a puff piece for it in the Daily Mail which, to mY surprise and gratification, brought in one of the fattest postbags the paper had garnered in ages. I mention this to emphasise that we back-of- magazine writers cannot be accused of neglecting the importance of consumer protection.

But eventually there comes the time when We must ask—who kicks the backside of the back- side-kickers? Having, with rare efficiency, told the Consumer Association that I had changed mY address, I received from them the followMg printed letter, misprints and all, overstamped la red 'URGENT.'

In order that we can correctly indentify Your subscription and alter our mailing lists' will you please FORWARD YOUR MEMBERSDIP CARD OR A WRAPPER FROM YOUR YOUR COPY 00 'WHICH?. I. State your previous address

2. Do you subscribe to the Car Supplement to 'Which?'

3. Which month was your subscription taken out? .

4. Did you place your subsription through a

We suckers part with our money all too easily. If the Subscription Department, Caxton Hill, Hertford, can alter my address only after I have filled in such a questionnaire, then I'm afraid that my subscription will very soon lapse.

Sometimes an item in a newspaper seems so fossilised in po-faced irony that criticism and analysis become superfluous. This quotation, entire and unabridged, from Tuesday's Evening Standard, is Swiftian in its dead-pan satire. •

One of Gravesend's most colourful characters, 75-year-old Mr. Ernest Osborne, who was expelled from the Labour Party when mayor of the town just after the Second World War, is writing his autobiography.

He has been a borough councillor, county councillor and magistrate during his public life.- He played cricket once for the MCC, fielded for Kent, and played football for the Royal Navy.

During his term as mayor, at a time of austerity, he startled many people by holding a brilliant garden party at Cobham Hall, a stately home just outside the town. He invited all the mayors of the county with their mace-bearers.

I can hardly wait until colourful Charles Wintour, the Evening Standard's Editor, scoops his austere Fleet Street rivals by obtaining this glittering exclusive for serialisation' in his bril- liant paper.