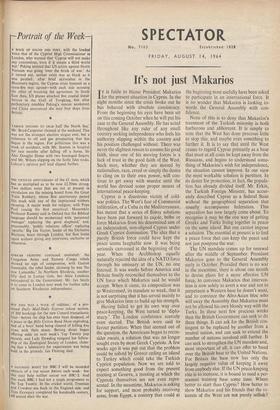 It's not just Makarios

IT is futile to blame President Makarios for the present situation in Cyprus. In the eight months since the crisis broke out he has behaved with absolute consistency.

From the beginning his eyes have been set on this coming October when he will put his case to the General Assembly. He has acted throughout like any ruler of any small country seeking independence who feels his authority slipping within the country and his position challenged without. There was never the slightest reason to assume his good faith, since one of his moving forces is a lack. of trust in the good faith of the West. Such men, whether they are moved by nationalism, race, creed or simply the desire to cling on to their own power, will con- tinue to get away with murder. until the world has devised some proper means of international peace-keeping.

Cyprus is a disastrous victim of cold- war politics. The West's fear of Communist infiltration, of a Cuba in the Mediterranean, has meant that a series of flimsy solutions have been put forward to cajole, bribe or force Makarios from his determined aim of an independent, non-aligned Cyprus under Greek Cypriot domination. The idea that a purely British force could have kept the peace seems laughable now. It was being seriously canvassed at the beginning of the year. When the Archbishop equally naturally rejected the idea of a NATO force through his emissary at the UN, no one listened. It was weeks before America and Britain finally reconciled themselves to the UN force which Makarios said he would accept. When it came, its composition was so Westernised, its mandate so weak, that it is not surprising that it has served mainly to give Makarios time to build up his strength. Having failed to get its own way over peace-keeping, the West turned to 'diplo- macy:. The London conference scarcely even started. The British were said to favour partition: When that seemed out of the question, the Americans began to recon- sider enosis, a solution that was no longer sought even by most Greek Cypriots. A few weeks ago it was put out that the problem could be solved by Greece ceding an island to Turkey which could take the Turkish Cypriot population. Now we are told to expect something good from the present meeting 'at Geneva, a meeting at which the Cypriots themselves, are not even repre- sented. In the meantime, Makarios is asking for support, and most probably receiving arms, from Egypt, a country that could at the beginning most usefully have been asked to participate in an international force. It is no wonder that Makarios is looking to- wards the General Assembly with con- fidence.

None of this is to deny that Makarios's treatment of the Turkish minority is both barbarous and abhorrent. It is simply to note that the West has done precious little to stop this, and maybe even something to further it. It is to say that until the West ceases to regard Cyprus primarily as a base that must at all costs be kept away from the Russians, and begins to understand some- thing of Makarios's wish for independence, the situation cannot improve. In our view the most workable solution is partition. In its desire for protection, in fact, the popula- tion has already divided itself. Mr. Erkin, the Turkish Foreign Minister, has accur- ately described Cyprus as a federal State without the geographical separation that . usually accompanies federation. This separation has now largely come about. To recognise it may be the one way of getting Greeks and Turks living together in peace on the same island. But one cannot impose a solution. The essential at present is to find a peace force that can keep the peace and not just postpone the war.

The UN mandate comes up for renewal after the middle of September. President Makarios goes to the General Assembly early in October. Provided there is no war in the meantime, there is about one month to devise plans for a more effective UN force, to convince Makarios that interven- tion is now solely to avert a war and not to perpetuate a Western base he doesn't want, and to convince the Afro-Asian bloc who will sway the Assembly that Makarios must not be allowed his own bloody way with the Turks. In 'these next few precious weeks then the British Government can seek to do three things. It can ask for the British con- tingent to be replaced by another from a neutral nation, and can seek to extend the number of nations involved still further. It can seek to strengthen the UN mandate and, most important of all, it can offer to hand over the British base to the United Nations. For Britain the base now has only the largely negative value of keeping it away from anybody else. If the UN peace-keeping role is to increase, it is bound to need a per- manent training base some time. Where better to start than Cyprus? How better to show Makarios and his friends that the in- terests of the West are not purely selfish?