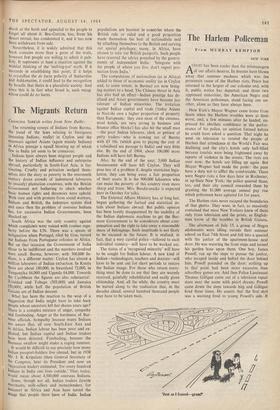 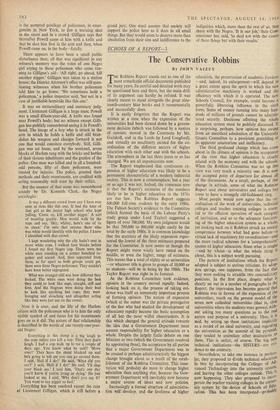 Aousr has been cooler than the mismanagers of our affairs deserve. Its breezes have blown away that summer madness which was the proximate cause of the Harlem riots. Peace has returned to the largest of our colonies and, with it, public notice has departed; and those two oppressed minorities, the American Negro and the American policeman, stand facing one an- other, alone as they have always been.

New York's Mayor Wagner came home from Spain when the Harlem troubles were at their worst, and, a few minutes after he landed, ex- pressed his absolute confidence in the perfor- mance of his police, an opinion formed before he could have asked a question. That night he went on television to remind the people of Harlem that attendance at the World's Fair was declining and the city's hotels only half-filled because tourists were being frightened away by reports of violence in the streets. The riots are over now; the hotels are filling up again. But Mayor Wagner had made the point: the poor have a duty not to afflict the comfortable. There were Negro riots a few days later in Rochester, in up-State New York; the police quieted those, too, and their city council rewarded them by granting the $1,000 average annual pay rise which policemen have agitated for for years.

The Harlem riots never escaped the boundaries of that ghetto. They were, in fact, so massively contained that most New Yorkers knew of them only from television and the prints, as English- men know of the troubles in British Guiana.

The afternoon of July 15, a group of Negro adolescents were idling outside their summer school on East 74th Street and fell into a quarrel with the janitor of the apartment-house next door. He was watering the front steps and turned his garden hose upon them. One boy, James Powell, ran up the steps to pursue the janitor, who escaped inside and bolted the door behind him. Powell pounded on the door; nothing up to that point had been more excessive than schoolboy games are. And then Police Lieutenant Thomas Gilligan came out of a television repair store near the scene with pistol drawn; Powell came down the steps towards him and Gilligan fired three times. He asserts that the first shot was a warning fired to young Powell's side. It is the accepted privilege of policemen, in emer- gencies in New York, to fire a warning shot in the street and in a crowd. Gilligan says that thereafter Powell came at him with a knife and that he shot him first in the arm and then, when Powell came on, in the body—fatally.

There appears to• have been a small public disturbance then; all that was significant in any witness's memory was the voice of one Negro girl crying to those policemen who came run- ning to Gilligan's aid: 'All right, go ahead, kill another nigger.' Gilligan was taken to a station house; the District Attorney's office was still ques- tioning witnesses when his brother policemen told him to go home. 'We sometimes hold a policeman,' a police inspector said, 'but not in a case of justifiable homicide like this one.'

It was an extraordinary and summary judg- ment. Lieutenant Gilligan is a large man; Powell was a small fifteen-year-old. A knife was found near Powell's body; but no witness except Gilli- gan has publicly remembered seeing it in Powell's hand. The image of a boy who is struck in the arm in which he holds a knife and still bran- dishes his weapon and charges forward is not one that would convince everybody. Still, Gilli- gan was set loose, and by the weekend, seven blocks of Harlem rang with the bricks and bottles of their riotous inhabitants and the gunfire of the police. One man was killed and in all a hundred- odd persons, fifty of them policemen, were treated for injuries. The police, granted their methods and their resentments, are credited with acting reasonably well even by their critics.

But the essence of that scene was remembered acutely by Dr. Kenneth Clark, the Negro sociologist: It was a different crowd from any 1 have ever seen. at riots like this one. It had the tone of that girl at the junior high school who kept yelling, 'Come on, kill another nigger.' A sort of taunting quality. Men would walk by the cops and say, 'Hey, whitey, here's one of us to shoot.' I'm sure that anyone there who was white would identify with the police. I know I identified with that crowd.

I kept wondering why the city hadn't sent in more white cops. I walked four blocks before I found my first Negro cop. There were ten white ones standing on a corner bunched to- gether and scared. And, then separated from them, as far apart as both groups could get, there were three Negro policemen. They couldn't have been better segregated.

What was stranger still was how different they looked. The white ones were doing the best they could to look like cops, straight, stiff and firm. And the Negroes were doing their best to look like anything but cops; they were lounging and slouching and altogether acting like they were just out on the corner.

Now it is over, and the life of the Harlem citizen with the policeman who is to him the only visible symbol of and focus for his resentments goes on as it did. The nature of that relationship is described in the words of one twenty-one-year- old Negro: Everything in this dump is a big laugh to the cops unless you kill a cop. Then they don't laugh. I had a cop walk up to me a couple of days ago. You know what he said? 'Move over!' They have the street blocked up and he's going to tell me you can go around them. I said, 'Hell if I do!' He said, 'What did you say?' I said, 'Hell if I do!' He said, slap Your black ass.' I told him, 'That's one day you'll know if you're living or dying.' He just looked at me. I said, 'Why don't you say it? You want to say nigger so bad.'

Everything has been resolved except the case of Lieutenant Gilligan, which is still before grand jury. One must assume that society will support the police here as it does in all small things. But they would seem to deserve more than absolution from their sins and indifference to the indignities which, more than the rest of us, they share with the Negro. 'It is our job,' their Com- missioner has said, `to deal not with the causes of these things but with their results.'