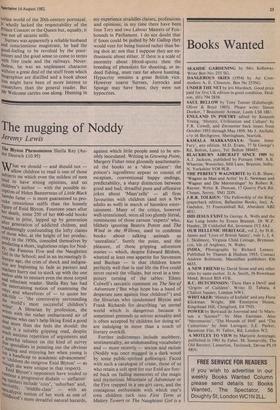 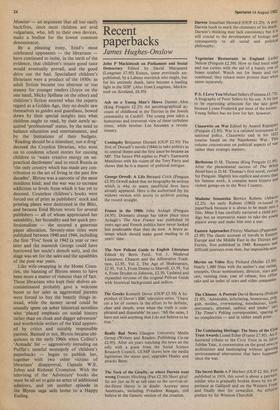 The mugging of Noddy

What we should — and should not — allow children to read is one of those subjects on which even the mildest of men tend to have strong opinions, and no children's author — with the possible ex- ception of Helen Bannerman of Little Black Sambo fame — is more guaranteed to pro- voke censorious sniffs than the homely figure of Enid Blyton. Fourteen years after her death, some 250 of her 600-odd books remain in print, lapped up by generation after generation of addicted chidren, and Maddeningly confounding the lofty claims of those who, at the height of her produc- tivity in the 1950s, consoled themselves by predicting a short, inglorious reign for Nod- dy, the Famous Five and the Naughtiest Qiirl in the School; and in an increasingly il- , terate age, the cries of shock and indigna- tion are beginning to fade as parents and teachers hurry out to stock up with the one author able to ensnare even the most torpid and reluctant reader. Sheila Ray has had the entertaining notion of examining the whys and wherefores of — to quote her tale 'the controversy surrounding the world's most successful children's !titer', A librarian by ' profession, she rites with the rather embarrassed air of sw°Meone who can't help liking Enid a good deal more than she feels she should: the result is a suitably gripping read, despite much anxious repetition of arguments and 4thgrateful reliance on the kind of survey erat sPecialises in pointing out the obvious h_eading and enjoying her when young is th gut, a handicap to academic advancement' thchildren do outgrow Enid Blyton' — as ough she were unique in that respect). cocrlid Blyton's opponents have tended to in "thine a progressive disdain — unflatter- i_ge epithets include `cosy', 'suburban' and, apocalyptic 'middle-class' — with an

notion of her work as one of childhood's more dreadful natural hazards,

against which little people need to be sen- sibly inoculated. Writing in Growing Point, Margery Fisher once gloomily anathematis- ed the books as a 'slow poison': the poison's ingredients appear to consist of escapism, conventional happy endings, predictability, a sharp distinction between good and bad, dreadful puns and offensive jokes about `Mam'zelle' — all firm favourites with children (and not a few adults as well) in search of harmless enter- tainment. Many of the critics, however well-intentioned, seem all too glumly literal, reminiscent of those earnest 'experts' who, blithely ignoring Beatrix Potter and The Wind in the Willows, used to condemn books about talking animals as 'unrealistic'. Surely the point, and the pleasure, of those gripping adventure stories — which, despite Edward Blishen, whetted at least one appetite for Stevenson and Buchan — is that children know perfectly well that in real life the Five could never outwit the villains, but revel in a tem- porary turning of the tables: Eileen Colwell's sarcastic comment on The Sea of Adventure (Tut what hope has a band of desperate men against four children?') and the librarian who condemned Blyton and Frank Richards for describing 'an unreal world which is dangerous because it sometimes pretends to mirror actuality and is often accepted by children for doing so' are indulging in more than a touch of literary overkill.

Further indictments include snobbery, sentimentality, an undemanding vocabulary and — more recently — sexism and racism (Noddy was once mugged in a dark wood by some public-spirited golliwogs). Faced with such a catalogue of crime, those of us who retain a soft spot for our Enid are forc- ed back on fading memories of the magic and mysterious Mountain of Adventure or the Five trapped in a sea-girt cave, and the contagious enthusiasm with which one's own children tuck into First Term at Malory Towers or The Naughtiest Girl is a Monitor — an argument that all too easily backfires, since most children are avid vulgarians, who, left to their own devices, make a beeline for the lowest common denominator.

By a pleasing irony, Enid's most celebrated opponents — the librarians have continued to insist, in the teeth of the evidence, that children's innate good taste would eventually prevail, and the good drive out the bad. Specialised children's librarians were a product of the 1930s: as adult fiction became too abstruse or too steamy for younger readers (Joyce on the one hand, Micky Spillane on the other) and children's fiction entered what the experts regard as a Golden Age, they no doubt saw themselves as guides and guardians, bowed down by their special insights into what children ought to read, by their newly ac- quired 'professional' status, by the need to balance education and entertainment, and by the limitations of their budgets. 'Reading should be a stimulant, not a drug' decreed the Croydon librarian, who went on to condemn school stories for causing children to 'waste creative energy on un- practical daydreams' and to extol Russia as 'the only country which has made any con- tribution to the art of living in the past few decades'. Blyton was a narcotic of the most insidious kind; and the war was to increase addiction to levels from which it has yet to descend. Countless children's books were forced out of print as publishers' stock and printing plates were destroyed in the Blitz, and because Enid Blyton wrote for several publishers — all of whom appreciated her saleability, her fecundity and her quick pro- fessionalism — she secured a generous paper allocation. Seventy-nine titles were published between 1940 and 1944, including the first 'Five' book in 1942 (a year or two later and the mannish George could have borrowed her uncle's demob suit), and the stage was set for the sales and the squabbles of the post-war years.

Like wife-swapping in the Home Coun- ties, the banning of Blyton seems to have been more a matter of rumour than of fact. Those librarians who kept their shelves un- contaminated probably gave a welcome boost to her sales as aggravated parents were forced to buy the beastly things in- stead, while the money saved could be soundly spent on sober historical novelists who 'placed emphasis on social history rather than on cloak and dagger adventure' and worthwhile writers of the kind approv- ed by critics and suitably responsible parents. Banned or not, Blyton became ubi- quitous in the early 1960s when Collins's 'Armada' list — aggressively intruding on Puffin's tasteful monopoly of children's paperbacks — began to publish her, together with two other victims of librarians' disapproval, Captain W.E. Johns and Richmal Crompton. With the televising of the 'Adventure' books she must be all set to gain an army of additional admirers, and yet another episode in the Blyton saga sails home to a Happy Ending.