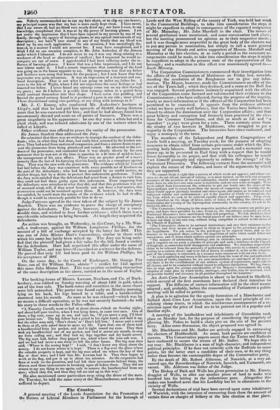 The banking-house of Messrs. Lawson, Newham, and Co. of Buck-

lersbury, was robbed on Sunday morning of about 1401. in gold, taken out of the iron safe. The bank-mites and securities in the same closet were left untouched. The porter was found early on Monday morning, lying on his back, his legs bound to a table, and a handkerchief crammed into his mouth. As soon as he was released—which was by no means a difficult operation, as he was not securely fastened—he told his story in these words to the Police-officer.

"I, Timothy Carroll; went to bed at about eleven o'clock on Sunday night ; and about half-past twelve, when I was lying down, in came two men. One of them, a big man, came up to me, and says he, If you move a peg, I'll blow your brains out.' The big fellow had a pistol in his right band, and held it up, but the other man said,.' Don't shoot,' or Don't kill him.' I never said a word to them at all, only asked them to spare my life. Upon that, one of them took a handkerchief from his pocket, and tied it tight round my eyes. They then took my-handkerchief out of my pocket, and tied it across my mouth, to stop use from calling out ; and they tied my legs together and my hands across. The big man had, before they gagged me, asked wherethe iron safe was. I said we had had never a one since we left the other house. The big man then said, Where is the money kept?' I said, I don't know any thing about the money. I do not know where it is kept.' There is a flap over the place where the valuable property is kept, and the big man asked me where the key of that flap or door was; and I told him Mr. Lawson had it. They then began to work at the flap, and got it up in about tea minutes. As the carpenters had been at work on the premises, and had left their instruments behind them, the thieves used those instruments in breaking open all before them. They did not return to say any thing to use again, only to remove the handkerchief from my eyes; which they did, and then they left me tied up in this way."

He also mentioned some particulars resp..cting the dress of the men. On Tuesday, he told the same story at the Mansionhouse, and was then anffered to depart.