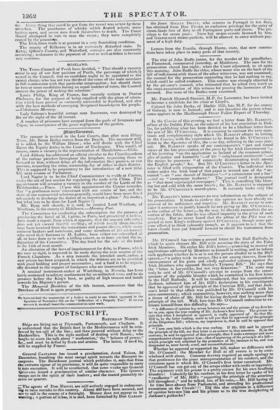 The trial of John Bodle junior, for the murder of

his grandfather, at Plumstead, commenced yesterday, at Maidstone. The case for the- prosecution closed last night; when the Court adjourned, to sit again this morning. John Bodle the elder, whose name was on the back of the bill of indietment.with those of the other.witnesses, was not examined; the counsel for the prosecution contending that he had nothing to say, which could be called evidence. This course was strongly objected to by the prisoner's counsel, who intimated that he relied very much on the cross-examination of this witness for proving the innocence of the accused. But none of the Bodies were examined.