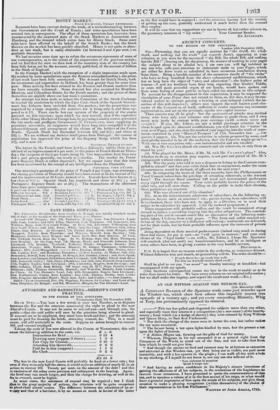 AN OLD WITNESS AGAINST THE WINDOW-TAX.

A CONSTANT READER of the Spectator sends some just remarks upon the Window. tax, which show bow odious this impolitic impost was upwards of a century ago ; and yet every succeeding Ministry, Whig or Tory, has pertinaciously opposed its removal.

" This tax has galled and disgusted the subjects more than any other, and especially since they esteem it a reimposition (by a new name) of the heartbr money ; from which (as a badge of slavery) they were released by King Williarps and Queen Mary, in their first Parliament. 4, Nor doth the change of the name seem to better the case, but rather maks* the tax more unnatural.

" The former being a tax upon lights kindled by man, but the present a tat upon the lights of heaven. " A Simon Magus tax, farming out the gifts of God for money. " Whereas Diogenes in his tub demand-4:d it as a naturist right from the Conqueror of? the World, to stand out of the Sun, and not to take that from him which he could not give him. " And though the excises on food and raiment may be at bottom as extensive and universal as this Window-tax, yet they being nut so visible, are paid more insensibly, and with a less eyesore to the people; I can walk all day with eh* in my stocking, if I myself do not know it, nor any one else tells me of it.

" And having an entire confidence in his Majesty's sincere intentions of gaining the affections of all his subjects, in the resolutions of the Legislature to execute those intentions, I have presumed to quote the commencement of tax, and to mention a release of it in the first annual of his reign, as what would leave a grateful impression of him upon the minds of his subjects, and give these occasion to make a pleasin,g recognition (within themselves) of the choice of their representatives in his brit Parliament." WRITTEN ST JOHN ASGILL, 1715.