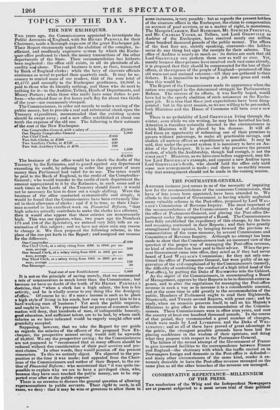 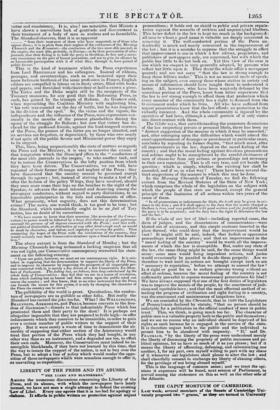 CONSERVATIVE REPENTANCE—MILLENNIUM OF THE PRESS.

THE conductors of the Whig and the Independent Newspapers are at present subjected to a most severe trial of their political virtue and consistency, It is, alas t. too notorious, that Ministe: have shown a marvellous lack of gratitude and discernment in their treatment of B. body. of men so zealous and so formidable. The Standard observes, that it is as apparent ...... " from their treatment of those who have supported, as of those who oppose them ; it is as plain from their neglect of the conductors of the Morning Chronicle and the Examiner—the conductors of the two most able journals in the empire, the most able, probably, in Europe—as by their persecution of other journals, that their feeling is to hold the press in thraldom, by fear and a neces- sary consistency on the part of honest journalists, and not to gain its alliance by an honourable. participation with it of what they, through it, have gained of public favour." This is the kind of treatment which the Press experiences from Lord BROUGHAM and his colleagues. Instead • of ribbons, peerages, and secretaryships, such as are bestowed upon their more fortunate brethren of the same profession in France, English editors are compelled to labour on in dusty attics, filled with books and papers, and furnished with chairs dear at half-a-crown a piece. The Tories and the Duke might still be the occupants of the 'Treasury mansions, for any good that the Reformina. Press, as such, has gained by the triumph of Reform. As Reforming said, when reproaching the Coalition Ministry with neglecting him, ." his vote was counted on the day of battle, but he was forgotten in the division of the spoil." So, the virtue and the vigour, the independence and the influence of the Press, were expressions con- stantly in the mouths of the present placeholders during the agony of the struggle for Reform; but now that victory has de-

• elared for the professed friends, against the loud-tongued scorners of the Press, the praises of the latter are no longer chanted, and its services are forgotten, or depreciated, by those who owe nearly if not quite all the public favour and Ministerial power they enjoy to its support.

This, then, being unquestionably the state of matters as regards the Press and the Ministry, it is easy to conceive the extent of that temptation which the Standard offers to the " conductors of the most able journals in the empire," to take another tack, and try to restore the Conservatives to the lofty position from which they have been driven. The Conservatives, we are told, have repented of their former ill-usage and neglect of the Press: they have discovered that the country cannot be governed except through its agency ; but, instead of striving to make a tool of it, after the fashion of the paltry Whigs, they have resolved, should they once more crass their legs on the benches to the right of the Speaker, to advance the most talented and deserving among the newspaper conductors, without regard to party distinctions, to au honourable participation in the toils and emoluments of office. What generosity, what sagacity, does not this determination evince ! The news, one would. think, is too good to be true ; but the Standard, which undoubtedly ought to be au fait of Tory tactics, has no doubt of its correctness.

"We have reason to know that their accession [the accession of the Conser- vatives) to power would be followed by a large distribution of public patronage amongst the persons of all degrees connected with the Press ; and this with- out political distinction, or distinction of any other kind except such as would be made by character, and talent, and capacity of serving the public. Thus connecting the hopes of the Press with the institutions of the country, they would certainly rear their Conservative structure upon a broad and firm founda- tion."

' The above extract is from the Standard of Monday ; but the Mornino.b Chronicle having intimated a lurking suspicion that all was not right, our Conservative contemporary reasserted his state- ment on the following evening. " Upon one point, however, we must set our contemporary right. It is mis- taken in supposing that the determination to support the liberty of the Press, and to improve its character by improving the prospects of all respectable per- sons connected with it, is merely a day-dream of a few Conservative Ex-Mem- bers of Parliament. The feeling has, we believe, been long entertained by. the whole body of Conservatives : they feel that we are in a course of revolution, from which nothing but an honest and firm action upon the public mind can rescue the country ; and they know, that as no other instrument but the Press can furnish the means for this action, it is only by changing the character of the Press the country can be saved."

The gullibility of the world is great. Questionless, the conduc- tors of newspapers are as gullible as other folks. But really the Standard has carried the joke too far. What ! the WELLINGTONS, BEAUFORTS, ABERDEENS, and PEELS, become converts to the free- dom of discussion?—friends to that indomitable Press which has prostrated them and their party to the dust? It is perhaps not altogether impossible that they are prepared to bribe high—to offer inducements which they conceive to be irresistible, in order to gain over a certain number of public writers to the support of their party. But it were surely a waste of time to demonstrate the ab- surdity of supposing that either section of the Aristocracy would treat that portion of the Press which they had bought, in any other way than as an instrument, and a degraded one too, to effect

their own ends. Moreover, the Conservatives must indeed be in- corrigible blockheads, if they have not learned by this time, that the way to insure the support of the nation, is not to buy over the Press, but to adopt a line, of policy which would.renderthe oppo- sition of those newspapers which were senseless enough to offer it, as unavailing as unpatriotic.