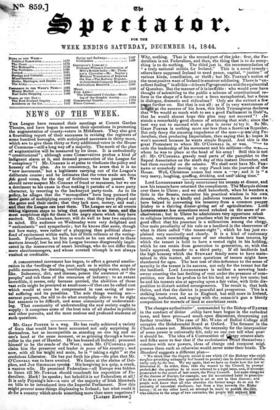 THE League have resumed their meetings at Covent Garden Theatre, and have begun in earnest their operations in promoting the augmentation of county-voters in Middlesex. They also give a flourishing report of their successes in revising the registers of some hundred boroughs, with anticipated successes in thirty more, which are to give them thirty or forty additional votes in the House of CommonsŌĆöstill a long way off a majority. The merit of the plan of augmentation will be measured by its issue. It is undoubtedly "constitutional"; although some Conservatives profess a kind of indignant alarm at it, and demand prosecution of the League for " conspiracy "1 Mr. COBDEN is at pains to vindicate the policy and honesty of the plan. As to consistency, he avers that it is no "new movement," but a legitimate carrying out of the League's deliberate course; and be intimates that the votes made are bona fide good votes, for the day of fictitious votes has passed. We should never suspect Mr. COBDEN of fraud or meanness, but we see a detriment to his cause in thus making it partake of a mere party character, by resorting to the hackneyed party-tools. As to its policy, he alleges that the "monopolists" have long pursued the same game of multiplying county-votes; that they have played out the game and their cards; that they lack men, money, and zeal; and that the League can beat them. The League are at all events taking vigorous steps to bring that question to an issue, and the most auspicious sign for them is the angry alarm which they have excited. Mr. COBDEN, however, will do well to bear two cautions in mind. His audience on Wednesday were very delighted and "enthusiastic" and sympathetic; but he knows that some, though not how many, were rather of a playgoing than political classŌĆö fond of excitement within walls, but of little reliance at the voting- booth. Furthermore, let him as much as he can attend to these matters himself, lest he and his League become disagreeably impli- cated in the manoeuvres of smart hirelings, who do not differ from mere electionmongers, and whose coveted triumph is not always exalted or creditable.