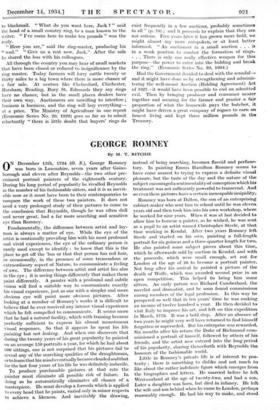 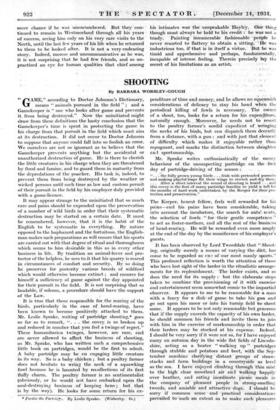 ON December 15th, 1734 (0. S.), George Romney was born in Lancashire, seven years after Gains- borough and eleven after Reynolds—the two other pre- eminent portrait painters of the eighteenth century. During his long period of popularity he rivalled Reynolds in the number of his fashionable sitters, and it is as inevit- able now as it must have been to their contemporaries to compare the work of these two painters. It does not need a very prolonged study of their pictures to come to the conclusion that Reynolds, though he was often dull and never great, had a far more searching and sensitive eye than Romney.

Fundamentally, the difference between artist and lay- man is always a matter of eye. While the eye of the artist is continually providing him with his most profound and vivid experiences, the eye of the ordinary person is rarely used except to identify : to know that this is the place to get off the 'bus or that that person has red hair, or occasionally, in the presence of some tremendous or extraordinary aspect of Nature, to communicate a feeling of awe. The difference between artist and artist lies also in the eye ; it is seeing things differently that makes them paint differently. A painter with a profound and subtle vision will find a suitable way to communicate exactly his visual experience, just as one with a simpler and more obvious eye will paint more obvious pictures. After looking at a number of Romney's works it is difficult to believe that he ever received any intense visual experience which he felt compelled to communicate. It seems more that he had a natural facility, which with training became perfectly sufficient to express his almost monotonous visual responses. So that it appears he spent his life painting but not looking. And when one discovers that during the twenty years of his great popularity he painted on an average 150 portraits a year, for which he had about 600 sittings, one is not surprised that his pictures fail to reveal any of the searching qualities of the draughtsman, or to learn that his mind eventually became clouded and that for the last four years of his life he was definitely imbecile.

To produce purchasable pictures at that rate the painter must eliminate all possible risk of failure. In doing so he automatically eliminates all chance of a masterpiece. He must develop a formula which is applied to every head that he paints, varied only in minor respects to achieve a likeness. And inevitably the drawing, instead of being searching, becomes flaccid and perfunc- tory. In painting Emma Hamilton Romney seems to have come nearest to trying to express a definite visual pleasure, but the taste of the day and the nature of the subject encouraged a sentimentality of conception which his treatment was not sufficiently powerful to transcend. And so even these pictures have a certain inescapable insipidity: Romney was born at Dalton, the son of an enterprising cabinet-maker who sent him to school until he was eleven years old and then took him into his own workshop, where he worked for nine years. When it was at last decided to allow him to become a painter, as he wished, he was sent as a pupil to an artist named Christopher Steele, at that time working in Kendal. After two years Romney left Steele and 'started on his own, painting a full-length portrait for six guineas and a three-quarter length for two. He also painted some subject pieces about this time, which he afterwards sold by auction in Kendal, and with the proceeds, which were small enough, set out for London at the age of 28 to become a portrait painter. Not long after his arrival he painted a picture of the death of Wolfe, which was awarded second prize in an open competition. This helped to bring him some sitters. An early patron was Richard Cumberland, the novelist and dramatist, and he soon found commissions among members of the legal profession. In this way he prospered so well that in ten years' time he was making an income of twelve hundred a year. He then decided to visit Italy to improve his art, and left on this expedition in March, 1778. It was a bold step. After an absence of two years he might very well have returned to find himself forgotten or superseded. But his enterprise was rewarded. Six months after his return the Duke of Richmond .com- missioned a portrait of himself, followed by others of his friends, and the artist now entered into the long period of his popularity, sharing thenceforth with Reynolds the honours of the fashionable world.

Little in Romney's private life is of interest to pos- terity ; there is something to dislike and not much to like about the rather indefinite figure which emerges from the biographies and letters. He married before he left Westmorland at the age of twenty-two, and had a son. Later a daughter was born, but died in infancy. He left the wife and son behind when he came to London, perhaps reasonably enough. He had his way to make, and stood more chance if he was uneneuMbered: But they con- ' tinued, to remain in Westmorland through all his years of success, seeing him only on his very rare visits to the North, until the last few years of his life when he returned to them to be looked after. It 'is not a very endearing story. Indeed, morose and uncommunicative as he was, it is not surprising that he had few friends, and so un- practised an eye for human qualities that chief among his intimates was' the unspeakable •Hay10. One- thing though Must 'alwayi be held to his credit • he was not a toady: 'Painting' innumerable fashionable "people he never resorted to flattery' to obtain a sitting. ' He was industrious too, if that is in itself a virtue.' lint was timid and apprehensive and "perhaps, fundamentally, ' incapable of intense feeling. Therein precisely lay the secret of his limitations as an artist: - - • •