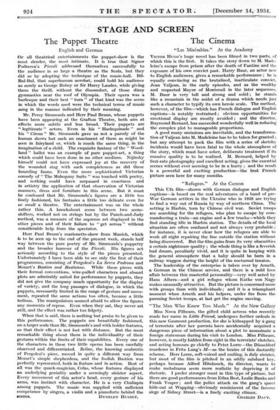 Page 15, 14 December 1934 — "Refugees." At the Curzon This Ufa film—shown with German dialogue
Close

"Refugees." At the Curzon This Ufa film—shown with German dialogue

and English captions—is based on the real adventures of a band of pre- War German settlers in the Ukraine who in 1928 are trying to find a way out of Russia by way of northern China. The setting is Harbin, torn by Chinese civil war. Soviet troops are searching for the refugees, who plan to escape by com- mandeering a train—an engine and a few trucks—which they find standing idle in Harbin station. The details of the local situation are often confused and not always very probable ; for instance, it is never clear how the refugees are able to work all night repairing the line outside the station without being discovered. But the film gains from its very obscurities a certain nightmare quality ; the whole thing is like a feverish bad dream, peculiarly vivid, and it is quite in keeping with the general atmosphere that a baby should be born in a railway waggon during the height of the nocturnal tension.

The leadership of the enterprise is taken over by Arneth, a German in the Chinese service, and there is a mild love affair between this masterful personality—very well acted by Hans Albers—and a girl refugee whom Kathe von Nagy makes unusually attractive. But the picture is concerned more with groups than with individuals ; and it is a triumphant moment when Arneth and his helpers, under fire from the pursuing Soviet troops, at last get the engine moving.