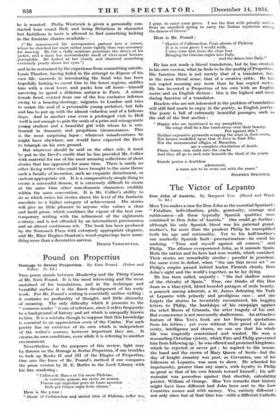 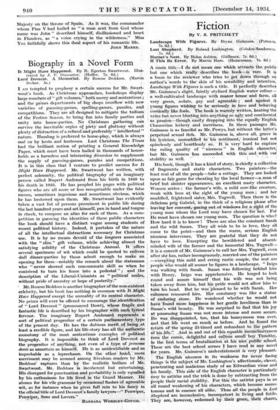 The Victor of Lepanto

Don John of Austria. By Margaret Yeo. (Sheed and Ward. 7s. 6d.) Miss YE0 makes a case for Don John as the essential Spaniard : " Fatalism, individualism, pride, generosity, courage and ruthlessness—all these typically Spanish qualities were combined in Don John of Austria." One could,,go further : although his only Spanish blood was his paternal grand- mother's, far more than the prudent Philip he exemplified both his age and nationality. Yet to his half-brother's one markedly Spanish fault—procrastination—he owed his undoing. " Time and myself against all comers," said Philip. The alliance overpowered John, as it unmade Spain. Both the nation and its hero had won worlds, which vanished. Their stories are remarkably similar : parallel in grandeur, the same even in defeat, when " the sun that never set " on Philip's empire passed behind leaden Flemish clouds, from John's sight and the world's together, as he lay dying.

He has been called, unjustly : " the last shallow mirror of the chivalry of Spain." True, one thinks of this Don Juan as a blue-eyed, blond-bearded paragon of male beauty, a peacock among admirals, a St. James defeating the Turk at Lepanto with princely and prodigious ease ; and one forgets the storms, he invariably encountered, his begging letters to Philip, the hardships of his campaign against the rebel Moors of Granada, the utter tragedy of his

But evanescence is not necessarily shallowness. An attractive feature of Miss Yeo's book are her frequent quotations from his letters ; yet even without their proof of his sin- cerity, intelligence and charm, we can see that his whole life was tragically constrained and wasted. He won a resounding Christian victory, which Fate and Philip prevented him from following up ; he was offered and promised kingdoms, which he rejected or never got ; he aspired to the rescue, the hand and the crown of Mary Queen of Scots—but the day of knight errantry was past, as Cervantes, one of his followers at Lepanto, was soon to show. He schooled his impetuosity, greater than any man's, with loyalty to Philip as great as that of his own friends toward himself ; his self- restraint was powerless against that churlish, calculating patriot, William of Orange. Miss Yeo remarks that history might have been different had John been sent to the Low Countries sooner and with money. _ Yes, entirely different : not only since but at that time too—with a different Catholic Majesty on the throne of Spain. As it was, the commander whom Pius V had hailed as " a man sent from God whose name was John " described himself, disillusioned and beset in Flanders, as " a voice crying in the wilderness." Miss Yeo faithfully shows this dual aspect of his romantic life.