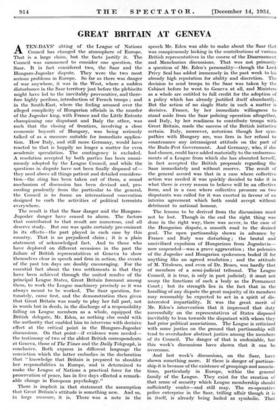 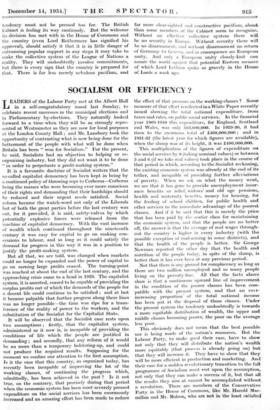 ATEN-DAYS' sitting of the League of Nations Council has changed the atmosphere of Europe. That is a large claim, but the facts justify it. The Council. was summoned to consider one question, the Saar. It in fact considered two, the Saar and the Hungaro-Jugoslav dispute. They were the two most serious problems in Europe. So far as there was danger of war anywhere, it was in the West, where a sudden disturbance in the Saar territory just before the plebiscite might have led to the inevitably provocative, and there- fore highly perilous, introduction of French troops ; and in the South-East, where the feeling aroused over the alleged complicity of Hungarian officials in the murder of the Jugoslav king, with France and the Little Entente championing one disputant and Italy the other, was such that the closing of frontiers, involving a close economic boycott of Hungary, was being seriously talked of as a measure suitable for immediate applica- tion. How Italy, and still more Germany, would have reacted to that is happily no longer a matter for even academie speculation. The contingency is excluded. A resolution accepted by both parties has been unani- mously adopted by the League Council, and while the questions in dispute have not been finally disposed of— they need above all things patient and detailed considera- tion—the sting has been taken out of them, a sound mechanism of discussion has been devised and, pro- ceeding prudently from the particular to the general, the Council is to frame an international convention designed to curb the activities of political terrorists everywhere.

The result is that the Saar danger and the Hungaro- Jugoslav danger have ceased to alarm. The factors that contributed to that result are numerous, and all deserve study. But one was quite certainly pre-eminent in its effects—the part played in each case by this country. That is no prejudiced claim ; it is a plain statement of acknowledged fact. And to those who have deplored on different occasions in the past the failure of British representatives at Geneva to show themselves clear in speech and firm in action, the events of the past ten days are doubly encouraging. For the essential fact about the two settlements is that they have been achieved through the united resolve of the principal League States, Great Britain foremost among them, to work the League machinery precisely as it was always meant to be worked. The Saar question, for- tunately, came first, and the demonstration then given that Great Britain was ready to play her full part, not in words but in deeds, in the discharge of a responsibility falling on League members as a whole, equipped the British delegate, Mr. Eden, as nothing else could with the authority that enabled him to intervene with decisive effect at the critical point in the Hungaro-Jugoslav discussions. On that point—if evidence were needed— the testimony of two of the ablest British correspondents -at Geneva, those of The Times and the Daily Telegraph, is conclusive. Both express in different language the conviction which the latter embodies in the declaration .that " knowledge that Britain. is prepared to shoulder her responsibilities in Europe, and is determined to make the League of Nations a practical force for the .preservation of peace, has in five days effected a remark- able change in European psychology." .

There is implicit in that statement the assumption that Great Britain's attitude is something new. And so, in large measure, it is. There was a note in the speech Mr. Eden was able to make about the Saar that was conspicuously lacking in the contributions of various British representatives in the course of the Disarmament and Manchurian discussions. That was not primarily a question of Mr. Eden's personality—though the Lord Privy Seal has added immensely in the past week to his already high reputation for ability and discretion. The decision to send troops to the Saar was taken by the Cabinet before he went to Geneva at all, and Ministers as a whole are entitled to full credit for the adoption of a policy which has already justified itself abundantly. But the action of no single State in such a matter is decisive. France, by her immediate willingness to stand aside from the Saar policing operation altogether, and Italy, by her readiness to contribute troops with Great Britain, made the success of the British initiative certain. Italy, moreover, notorious though her sym- pathies with Hungary are, was firm in her refusal to countenance any intransigent attitude on the part of the Buda-Pest Government. And Germany, who, if she had chosen, could have added materially to the embarrass- ments of a League from which she has absented herself, in fact accepted the British proposals regarding the Saar immediately and without reserve. The result of the general accord was that in a case where collective action was needed it was quickly decided to take it in what there is every reason to believe will be an effective form, and in a case where collective pressure on two disputants was called for it was exerted in favour of an interim agreement which both could accept without detriment to national honour.

The lessons to be derived from the discussions must not be lost. Though in the end the right thing was done in the right way, there was never, in the case of the Hungarian dispute, a smooth road to the desired goal. The open partisanship shown in advance by France and Italy was disturbing ; the brutal and uncivilized expulsion of Hungarians from Jugoslavia— now suspended—was a grave aggravation ; the polemics of the Jugoslav and Hungarian spokesmen boded ill for anything like an agreed resolution ; and the attitude of M. Titulesco, and even of Dr. Benes, was hardly that of members of a semi-judicial tribunal. The League Council, it is true, is only in part judicial,• it must not usurp the functions of such a body as the Permanent Court ; but its strength lies in the fact that in the handling of any dispute the great majority of its members may reasonably be expected to act in spirit of dis- interested impartiality. It was the great merit of Mr. Eden's intervention that it impressed that duty successfully on the representatives of States disposed inevitably to lean towards the disputant with whom they had prior political associations. The League is criticized with some justice on the ground that partisanship will tend to overshadow abstract justice among the members of its Council. The danger of that is undeniable, but this week's discussions have shown that it can be overcome.

And last week's discussions, on the Saar, have shown something more. If there is danger of partisan- ship it is because of the existence of groupings and associa- tions, particularly in Europe, within the general family of the League.. They exist for the creation of that sense of security which League membership should sufficiently confer—and still may. The co-operative police enterprise in the Saar, trifling affair though it is in itself, is already being hailed as symbolic. That tendency must not be pressed too far. The British Cabinet is feeling its way cautiously. But the welcome its decision has met with in the House of Commons and the country (even Lord Rothermere has signified his approval), should satisfy it that it is in little danger of outrunning popular support in any steps it may take to make the collective system of the League of Nations a reality. They will undoubtedly involve commitments, but there is every sign that the country is prepared for that. There is far less merely nebulous pacifism, and fax more clear-sighted and constructive pacifism, about- than some members of the Cabinet seem to recognize. Without an effecti ve collective system there will be no security in Europe. Without security there will be no disarmament, and without disarmament no return of Germany to Geneva, and in consequence no European unity. And only a European unity closely-knit can assure the world against that potential Eastern menace of which Lord Lothian spoke so gravely in the House of Lords a week ago.