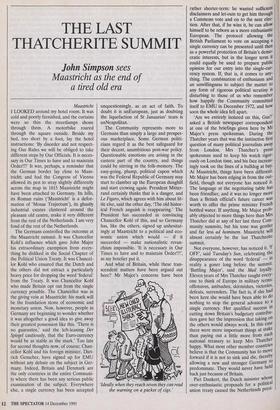 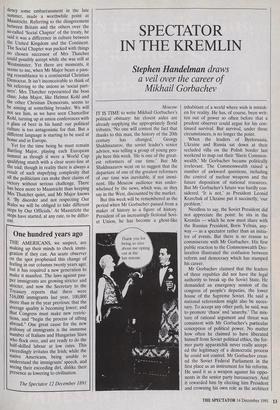 Maastricht as the end of a tired old era

Maastricht I LOOKED around my hotel room. It was cold and poorly furnished, and the curtains were so thin the streetlamps shone through them. A motorbike roared through the square outside. Beside my bed, too short by a foot, lay the hotel instructions: 'By disorder and not respect- ing Our Rules we will be obliged to take different steps by Our Officials. It is neces- sary in Our Times to have and to maintain Order!!!' It was, perhaps, a reminder that the German border lay close to Maas- tricht; and had the Congress of Vienna allowed its pen to stray slightly differently across the map in 1815 Maastricht might have been attached to Germany. Its hills, its Roman ruins (`Maastricht' is a defor- mation of `Mosae Trajectum'), its ghastly industrial estates clustered around the pleasant old centre, make it very different from the rest of the Netherlands. I am very fond of the rest of the Netherlands.

The Germans controlled the outcome at the Maastricht summit. It was Chancellor Kohl's influence which gave John Major his extraordinary exemption from every- thing he disliked in the Social Chapter of the Political Union Treaty. It was Chancel- lor Kohl who ensured that the Dutch and the others did not extract a particularly heavy price for dropping the word 'federal' from the Treaty. It was Chancellor Kohl who made Britain opt out from the single currency possible. The Chancellor was in the giving vein at Maastricht: his mark will be the foundation stone of economic and monetary union. Now, however, people in Germany are beginning to wonder whether it was altogether a good idea to give away their greatest possession like this. 'There is no guarantee,' said the left-leaning Der Spiegel cautiously, that the Euro-currency would be as stable as the mark.' Too late for second thoughts now, of course; Chan- cellor Kohl and his foreign minister, Diet- rich Genscher, have signed up for EMU without any debate on the subject in Ger- many. Indeed, Britain and Denmark are the only countries in the entire Communi- ty where there has been any serious public examination of the subject. Everywhere else, a single currency has been accepted

unquestioningly, as an act of faith. To doubt it is unEuropean, just as doubting the liquefaction of St Januarius' tears is unNeapolitan.

The Community represents more to Germans than simply a large and prosper- ous marketplace. Some German politi- cians regard it as the best safeguard for their decent, unambitious post-war policy. Questionable emotions are arising in the eastern part of the country, and things could be stirring in the folk-memory. The easy-going, plump, political capon which was the Federal Republic of Germany may start to clamber up the European dunghill and start crowing again. President Mitter- rand certainly thinks that is a danger, and Le Figaro, which agrees with him about lit- tle else, said the other day, 'The old histor- ical French anguish is reappearing.' The President has succeeded in convincing Chancellor Kohl of this, and so Germany has, like the others, signed up unhesitat- ingly at Maastricht to a political and eco- nomic union which would — if it succeeded — make nationalistic revan- chism impossible. 'It is necessary in Our Times to have and to maintain Order!!!', as my hotelier put it.

And what of Britain, while these tran- scendent matters have been argued out here? Mr Major's concerns have been 'Ideally when they reach seven they can read the warning on a packet of cigs.' rather shorter-term: he wanted sufficient disclaimers and let-outs to get him through a Commons vote and on to the next elec- tion. After that, if he wins it, he can allow himself to be reborn as a more enthusiastic European. The protocol allowing the British Parliament to vote on accepting a single currency can be presented until then as a powerful protection of Britain's demo- cratic interests, but in the longer term it could equally be used to prepare public opinion for our entry into the single-cur- rency system. If, that is, it comes to any- thing. The combination of enthusiasm and an unwillingness to subject the matter to any form of rigorous political scrutiny is disturbing to those of us who remember how happily the Community committed itself to EMU in December 1972, and how soon the whole idea fell apart. `Are we entirely isolated on this, Gus?' asked a British newspaper correspondent at one of the briefings given here by Mr Major's press spokesman. During the Thatcher years that was the instinctive first question of many political journalists away from London. Mrs Thatcher's press spokesman used to keep his watch rigor- ously on London time, and his face increas- ingly took on the lines of a bulldog at bay. At Maastricht, things have been different. Mr Major has been edging in from the out- field, though not everyone has noticed it. The language at the negotiating table has been friendlier, and it was no longer more than a British official's future career was worth to offer the prime minister French bottled water. If anything, Mr Major prob- ably objected to more things here than Mrs Thatcher did at any of her last three Com- munity summits, but his tone was gentler and far less ad hominem. Maastricht will almost certainly be the last Thatcherite summit.

Not everyone, however, has noticed it. `F OFF', said Tuesday's Sun, celebrating the disappearance of the word 'federal' — In reality a goner long before the summit. `Battling Major', said the Mail loyally. Eleven years of Mrs Thatcher taught every- one to think of Europe in military terms: offensives, ambushes, skirmishes, victories, defeats, surrenders. The fact is, if she had been here she would have been able to do nothing to stop the general advance to a

cutting down Britain's budgetary contribu- tion gave her the impression that taking on the others would always work. In this case there were more important things at stake than paying out a little more from each national treasury to keep Mrs Thatcher happy. What most other member countries believe is that the Community has to move forward if it is not to sink and die, thereby allowing a new and stronger Germany to predominate. They would never have held back just because of Britain.

Piet Dankert, the Dutch minister who over-enthusiastic proposals for a political union treaty caused the Netherlands presi- dency some embarrassment in the late summer, made a worthwhile point at Maastricht. Referring to the disagreement between Britain and the others over the so-called 'Social Chapter' of the treaty, he said it was a difference in culture between the United Kingdom and the Continent. The Social Chapter was packed with things no chosen successor of Mrs Thatcher could possibly accept while she was still at Westminster. Yet there are moments, it Seems to me, when Mr Major bears a pass- ing resemblance to a continental Christian Democrat. It isn't inconceivable to think of his referring to the unions as 'social part- ners'. Mrs Thatcher represented the boss class; John Major, like Helmut Kohl and the other Christian Democrats, seems to be aiming at something broader. We will not see him, as we have seen Chancellor Kohl, turning up at union conferences with a glass of beer in his hand: our political culture is too antagonistic for that. But a different language is starting to be used at home and in Europe. Yet for the time being he must remain Battling Major, playing each European summit as though it were a World Cup qualifying match with a clear score-line at the end; though in reality there is always a result of such stupefying complexity that all the politicians can make their claims of victory without serious challenge. There has been more to Maastricht than keeping Mrs Thatcher quiet, and Mr Major knows it. `By disorder and not respecting Our Rules we will be obliged to take different steps by Our Officials.' At Maastricht the steps have started, at any rate, to be differ- ent.