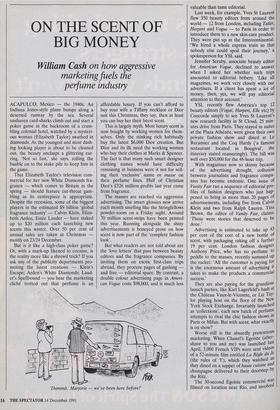 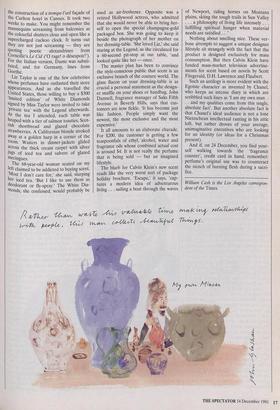 ON THE SCENT OF BIG MONEY

William Cash on how aggressive

ACAPULCO, Mexico — the 1940s: An Indiana Jones-style plane bumps along a deserted runway by the sea. Several unshaven card-sharks climb out and start a poker game in the backroom of a crum- bling colonial hotel, watched by a mysteri- ous woman (Elizabeth Taylor) swathed in diamonds. As the youngest and most dash- ing looking player is about to be cleaned out, the beauty unclasps a glittering ear- ring. 'Not so fast,' she says, rolling the bauble on to the stake pile to keep him in the game.

That Elizabeth Taylor's television com- mercial for her new White Diamonds fra- grance — which comes to Britain in the spring — should feature cut-throat gam- bling as its centrepiece is appropriate. Despite the recession, some of the biggest players in the estimated $9 billion 'global fragrance industry' — Calvin Klein, Eliza- beth Arden, Estee Lauder — have staked up to $20 million each launching new scents this winter. Over 50 per cent of annual sales are taken at Christmas mostly on 23/24 December.

But is it like a high-class poker game? Or, with a mark-up likened to cocaine, is the reality more like a shrewd trick? If you ask any of the publicity departments pro- moting the latest creations — Klein's Escape; Arden's White Diamonds; Laud- er's Spellbound — you hear the marketing cliché trotted out that perfume is an affordable luxury. If you can't afford to buy your wife a Tiffany necklace or Dior suit this Christmas, they say, then at least you can buy her their latest scent.

This is largely myth. Most luxury scent is now bought by working women for them- selves. Only the stinking rich habitually buy the latest $6,000 Dior creation. But Dior and its ilk need the working women who buy their clothes at Marks & Spencer. The fact is that many such smart designer clothing names would have difficulty remaining in business were it not for sell- ing their 'exclusive' name en masse on their perfume lines. Half of Christian Dior's £326 million profits last year came from fragrance.

The masses are reached via aggressive advertising. The smart glossies now arrive each month smelling like the Stringfellows powder-room on a Friday night. Around 70 million scent-strips have been printed this year. Running alongside the shiny advertisements is honeyed prose on how scent is now part of the 'complete fashion look'.

But what readers are not told about are the 'love letters' that pass between beauty editors and the fragrance companies. By inviting them on exotic first-class trips abroad, they procure pages of gushing and free — editorial space. By contrast, a double colour advertising page in Ameri- can Vogue costs $98,000, and is much less

Dammit, Marjorie — we've been here before!' valuable than tame editorial.

Last week, for example, Yves St Laurent flew 350 beauty editors from around the world — 12 from London, including Tatler, Harpers and Vogue — to Paris in order to introduce them to a new skin-care product. They were put up at the Intercontinental. `We hired a whole express train so that nobody else could spoil their journey,' a spokesperson for YSL said.

Jennifer Scruby, associate beauty editor for American Vogue, declined to answer when I asked her whether such trips amounted to editorial bribery. 'Like all magazines, we work very closely with our advertisers. If a client has spent a lot of money, then, yes, we will pay editorial attention to their account.'

YSL recently flew America's top 12 beauty editors (Vogue, Harpers, Elle etc) by Concorde simply to see Yves St Laurent's new research facility in St Cloud, 25 min- utes drive from Paris. They stayed in suites at the Plaza Athenee, were given their own private fashion show and dined at Le Recamier and the Coq Hardy Ca famous restaurant located in Bougival', the itinerary stated reassuringly). The bill was well over $50,000 for the 48-hour trip.

With magazines now so skinny because of the advertising drought, collusion between journalists and fragrance compa- nies has become endemic. One issue of Vanity Fair ran a sequence of editorial pro- files of fashion designers who just hap- pened to bring in more than 20 pages of advertisements, including five from Calvin. Klein and two from Ralph Lauren. Tina Brown, the editor of Vanity Fair, claims: `Those were stories that deserved to be done.'

Advertising is estimated to take up 43 per cent of the cost of a new bottle of scent, with packaging raking off a further 19 per cent. London fashion designer Anthony Price, who has no perfume to peddle to the masses, recently summed up the racket: 'All the customer is paying for is the enormous amount of advertising it takes to make the products a commercial success.'

They are also paying for the grandiose launch parties, like Karl Lagerfeld's bash at the Château Vaux-le-Vicomte, or Liz Tay- lor playing host on the floor of the New York Stock Exchange. Invariably launched as 'collections', each new batch of perfume attempts to rival the chic fashion shows in Paris or Milan. But with scent, what exactly is on show?

Worse still is the absurdly pretentious marketing. When Chanel's Egoiste (after- shave to you and me) was launched last April, 3,000 French VIPs were sent videos of a 52-minute film entitled La Regle du fe (the rules of T), which they watched as they dined on a supper of haute cuisine and champagne delivered to their doorstep 11 the Ritz.

The 30-second Egoiste commercial was filmed on location near Rio, and involved

the construction of a trompe-Vcril facade of the Carlton hotel in Cannes. It took two weeks to make. You might remember the mannequins screaming from balconies as the colourful shutters close and open like a supercharged cuckoo clock. It turns out they are not just screaming — they are quoting poetic alexandrines from Corneille's Le Cid c0 rage! o desespoir!'). For the Italian version, Dante was substi- tuted, and for Germany, lines from Goethe. Liz Taylor is one of the few celebrities whose perfumes have outlasted their store appearances. And as she travelled the United States, those willing to buy a $300 limited edition' of White Diamonds signed by Miss Taylor were invited to take private tea' with the Legend afterwards. At the tea I attended, each table was heaped with a tier of salmon toasties, Scot- tish shortbread and glazed chocolate strawberries. A Californian blonde stroked away at a golden harp in a corner of the room. Waiters in dinner-jackets glided across the thick cream carpet with silver Jugs of iced tea and salvers of glazed meringues. The 68-year-old woman seated on my left claimed to be addicted to buying scent. t care for,' s Most I don't said, slurping her iced tea. 'But I like to use them as deodorant or fly-spray.' The White Dia- monds, she confessed, would probably be used as air-freshener. Opposite was a retired Hollywood actress, who admitted that she would never be able to bring her- self to open the special champagne-gold packaged box. She was going to keep it beside the photograph of her mother on her dressing-table. She loved Liz,' she said staring at the Legend, as she circulated for a 60-second pit-stop at our table, 'and looked quite like her — once.' The master plan has been to convince the style-conscious public that scent is an exclusive branch of the couture world. The glass flacon on your dressing-table is as crucial a personal statement as the design- er snaffle on your shoes or handbag. John Damsell, fragrance manager of Saks Fifth Avenue in Beverly Hills, says that cus- tomers are now fickle. 'It has become just like fashion. People simply want the newest, the most exclusive and the most expensive.' all amounts to an elaborate charade. For $200, the customer is getting a few teaspoonfuls of ethyl, alcohol, water and fragrance oils whose combined actual cost is around $4. It is not really the perfume that is being sold — but an imagined lifestyle. The blurb for Calvin Klein's new scent sort of pa reads like the very worst sckage a holiday brochure. `Escape,' it says, 'cap- tures modern idea of adventurous living . sailing a boat through the waves of Newport, riding horses on Montana plains, skiing the tough trails in Sun V . . . a philosophy of living life intensely . fulfilling spiritual hunger when material needs are satisfied ...' Nothing about smelling nice. These ver- bose attempts to suggest a unique designer lifestyle sit strangely with the fact that the product is designed exclusively for mass consumption. But then Calvin Klein have funded mass-market television advertise- ments for scent based on novels by Scott Fitzgerald, D.H. Lawrence and Flaubert. Such an antilogy is more evident with the EgoIste character as invented by Chanel, who keeps an intense diary in which are scribbled such lines as 'I am my own man . . . and my qualities come from this single, absolute fact'. But another absolute fact is that Chanel's ideal audience is not a lone Nietzschean intellectual ranting in his attic loft, but rather droves of your average, unimaginative executives who are looking for an identity (or ideas for a Christmas present). And if, on 24 December, you find your- self walking towards the 'fragrance counter', credit card in hand, remember: perfume's original use was to counteract the stench of burning flesh during a sacri- fice.

William Cash is the Los Angeles correspon- dent of the Times