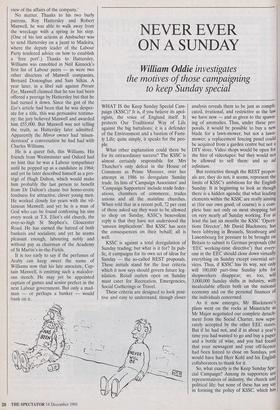 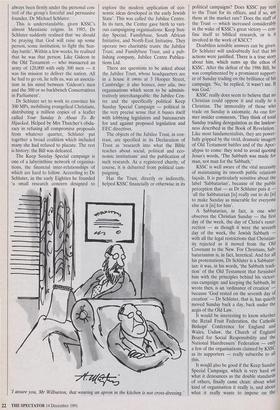 NEVER EVER ON A SUNDAY

the motives of those campaigning to keep Sunday special

WHAT IS the Keep Sunday Special Cam- paign (KSSC)? It is, if you believe its apol- ogists, the voice of England itself. It protects Our Traditional Way of Life against the big battalions; it is a defender of the Environment and a bastion of Fami- ly Life; quite simply, it speaks for the peo- ple.

What other explanation could there be for its extraordinary success? The KSSC is almost certainly responsible for Mrs Thatcher's only defeat in the House of Commons as Prime Minister, over her attempt in 1986 to deregulate Sunday trade. Its lists of 'Campaign Associates' and `Campaign Supporters' include trade feder- ations, chambers of commerce, trades unions and all the mainline churches. When told that in a recent poll, 72 per cent of those asked say they want to be allowed to shop on Sunday, KSSC's benevolent reply is that they have not understood the `unseen implications'. But KSSC has seen the consequences on their behalf; all is well.

KSSC is against a total deregulation of Sunday trading; but what is it for? In pub- lic, it campaigns for its own set of ideas for Sunday — the so-called REST proposals. These initials stand for the four criteria which it now says should govern future leg- islation. Retail outlets open on Sunday must cater for Recreation, Emergencies, Social Gatherings or Travel.

These criteria are designed to look posi- tive and easy to understand, though closer

analysis reveals them to be just as compli- cated, irrational, and restrictive as the law we have now — and as given to the spawn- ing of anomalies. Thus, under these pro- posals, it would be possible to buy a new blade for a lawn-mower, but not a lawn- mower; a replacement fencing panel could be acquired from a garden centre but not a DIY store. Video shops would be open for the hire of videotapes: but they would not be allowed to sell them: and so ad infinitum.

But restrictive though the REST propos- als are, they do not, it seems, represent the limits of KSSC's ambitions for the English Sunday. It is beginning to look as though there is a hidden agenda; that what leading elements within the KSSC are really aiming at (for our own good, of course) is a com- plete ban: not only on most shopping but on very nearly all Sunday working. For at least the last six months the KSSC 'Opera- tions Director', Mr David Blackmore, has been lobbying in Brussels, Strasbourg and Luxembourg for pressure to be brought on Britain to submit to German proposals (the `EEC working-time directive') that every- one in the EEC should close down virtually everything on Sunday except essential ser- vices. Thus, if KSSC has its way, not only will 100,000 part-time Sunday jobs for shopworkers disappear; so, too, will 3,000,000 Sunday shifts in industry, with incalculable effects both on the national economy and on the personal finances of the individuals concerned.

As it now emerges, Mr Blackmore's plans went on the rocks at Maastricht as Mr Major negotiated our complete detach- ment from the Social Charter, now sepa- rately accepted by the other EEC states. But if he had not, and if in about a year's time you had wanted to go and buy a paper and a bottle of wine, and you had found that your newsagent and your off-licence had been forced to close on Sundays, you would have had Herr Kohl and his English collaborators to thank for it.

So, what exactly is the Keep Sunday Spe- cial Campaign? Among its supporters are representatives of industry, the church and political life: but none of these has any say in forming the policy of KSSC, which has

always been firmly under the personal con- trol of the group's forceful and persuasive founder, Dr Michael Schluter.

This is understandable, given KSSC's almost Messianic origins. In 1985, Dr Schluter suddenly realised that 'we should be praying that God will raise up some person, some institution, to fight the Sun- day battle'. Within a few weeks, he realised that he was that person. Like Gideon in the Old Testament — who massacred an army of 120,000 with only 300 men — it was his mission to deliver the nation. All he had to go on, he tells us, was an associa- tion in his mind between 'Gideon's men and the 300 or so backbench Conservatives in Parliament'.

Dr Schluter set to work to convince his 300 MPs, mobilising evangelical Christians, distributing a million copies of a leaflet called Your Sunday Is About To Be Hijacked. Helped by Mrs Thatcher's obdu- racy in refusing all compromise proposals from whatever quarter, Schluter put together a broad coalition which included many she had refused to placate. The rest is history: the Bill was defeated.

The Keep Sunday Special campaign is one of a labyrinthine network of organisa- tions, the financial inter-relationships of which are hard to follow. According to Dr Schluter, in the early Eighties he founded `a small research concern designed to

There are questions to be asked about the Jubilee Trust, whose headquarters are in a house it owns at 3 Hooper Street, Cambridge: it also houses, inter alia, two organisations which seem to be adminis- tratively interchangeable: the Jubilee Cen- tre and the specifically political Keep Sunday Special Campaign — political in the very precise sense that it busies itself with lobbying legislators and bureaucrats for and against proposed legislation and EEC directives.

The objects of the Jubilee Trust, in con- trast, are specified in its Declaration of Trust as 'research into what the Bible teaches about social, political and eco- nomic institutions' and the publication of such research. As a registered charity, of course, it is debarred from political cam- paigning.

Has the Trust, directly or indirectly, helped KSSC financially or otherwise in its `I assure you, Mr Wilburton, that wearing an apron in the kitchen is not cross-dressing.' political campaigns? Does KSSC pay rent to the Trust for its offices, and if so, are these at the market rate? Does the staff of the Trust — which increased considerably in the wake of KSSC's great victory — con- fine itself to biblical research, or is it involved in the work of KSCC?

Doubtless sensible answers can be given. Dr Schluter will undoubtedly fee] that his actions were justified. There is a true story about him, which sums up the ethos of KSSC. After the defeat of the 1986 Bill, he was complimented by a prominent support- er of Sunday trading on the brilliance of his campaign. 'No,' he replied, 'it wasn't me. It was God.'

KSSC really does seem to believe that no Christian could oppose it and really be a Christian. The immorality of those who trade on Sunday is axiomatic. As one for- mer insider comments, 'They think of total Sunday trading deregulation as the lawless- ness described in the Book of Revelation.' Like most fundamentalists, they are power- fully gripped by the vivid, dramatic imagery of Old Testament battles and of the Apoc- alypse to come: they tend to avoid quoting Jesus's words, 'The Sabbath was made for man, not man for the Sabbath.'

KSSC is well aware of the vital necessity of maintaining its smooth public relations facade. It is particularly sensitive about the label `Sabbatarian', because of the public perception that — as Dr Schluter puts it 'all the Sabbatarian [is] really out to do [is] to make Sunday as miserable for everyone else as it [is] for him'.

A Sabbatarian, in fact, is one who observes the Christian Sunday — the first day of the week, the day of Christ's resur- rection — as though it were the seventh day of the week, the Jewish Sabbath — with all the legal restrictions that Christian- ity rejected as it moved from the Old Covenant to the New. For Christians, Sab- batarianism is, in fact, heretical. And for all his protestations, Dr Schluter is a Sabbatar- ian: it was, in his words, 'the Sabbath tradi- tion' of the Old Testament that furnished him with the principles behind his victori- ous campaign: and keeping the Sabbath, he wrote then, is an 'ordinance of creation' — because 'God rested on the seventh day of creation' — Dr Schluter, that is, has quietly moved Sunday back a day, back under the aegis of the Old Law.

It would be interesting to know whether the Retail Fruit Federation, the Catholic Bishops' Conference for England and Wales, Usdaw, the Church of England Board for Social Responsibility and the National Hairdressers' Federation — only a few of the organisations claimed by KSSC as its supporters — really subscribe to all this.

It wou,ld also be good if the Keep Sunday Special Campaign, which is very hard on what it denounces as the double standards of others, finally came clean: about what kind of organisation it really is, and about what it really wants to impose on the