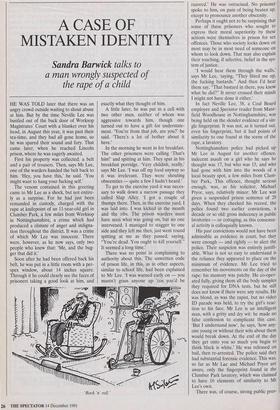 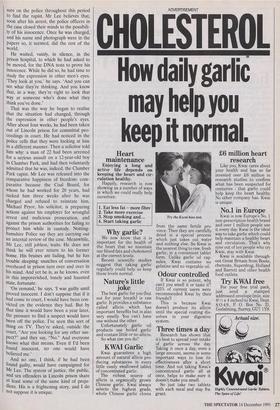 A CASE OF MISTAKEN IDENTITY

a man wrongly suspected of the rape of a child

HE WAS TOLD later that there was an angry crowd outside waiting to shout abuse at him. But by the time Neville Lee was bustled out of the back door of Worksop Magistrates' Court with a blanket over his head, in August this year, it was past their tea-time, and they had all gone home, so he was spared their sound and fury. That came later, when he reached Lincoln prison, where he was eagerly awaited.

First his property was collected: a belt and a pair of trousers. Then, says Mr Lee, one of the warders handed the belt back to him. 'Hey, you have this,' he said. 'You might want to hang your flicking self.'

The venom contained in this greeting came to Mr Lee as a shock, but not entire- ly as a surprise. For he had just been remanded in custody, charged with the rape at knifepoint of an 11-year-old girl in Clumber Park, a few miles from Worksop in Nottinghamshire, a crime which had produced a climate of anger and indigna- tion throughout the district. It was a crime of which Mr Lee was innocent. There were, however, as he now says, only two people who knew that: 'Me, and the bug- ger that did it.'

Soon after he had been offered back his belt, he was put in a little room with a Per- spex window, about 14 inches square. Through it he could clearly see the faces of prisoners taking a good look at him, and exactly what they thought of him.

A little later, he was put in a cell with two other men, neither of whom was aggressive towards him, though one turned out to have a gift for understate- ment. 'You're from that job, are you?' he said. 'There's a lot of bother about it here.'

In the morning he went in for breakfast. The other prisoners were calling 'That's him!' and spitting at him. They spat in his breakfast porridge. 'Very childish, really,' says Mr Lee. 'I was off illy food anyway so it was irrelevant. They were shouting obscenities — quite a few I hadn't heard.'

To get to the exercise yard it was neces- sary to walk down a narrow passage they called Slap Alley. 'I got a couple of thumps there. Then, in the exercise yard, I was laid into. I was kicked in the mouth and the ribs. The prison warders must have seen what was going on, but no one intervened. I managed to stagger to one side and they left me then, just went round spitting at me as they passed, saying, "You're dead. You ought to kill yourself." It seemed a long time.'

There was no point in complaining to authority about this. The unwritten code of prison life, in this, as in other aspects, similar to school life, had been explained to Mr Lee. 'I was warned early on — you mustn't grass anyone up 'cos you'd be

razored.' He was ostracised. No prisoner spoke to him, on pain of being beaten up, except to pronounce another obscenity.

Perhaps it ought not to be surprising that some of these prisoners who sought to express their moral, superiority by these actions were themselves in prison for sex offences. Those who society looks down on most may be in most need of someone on whom to look down. That may also explain their touching, if selective, belief in the sys- tem of justice.

`I would hear them through the walls,' says Mr Lee, 'saying, "They fitted me up, the fucking bastards." And then I'd hear them say, "That bastard in there, you know what he did?" It never crossed their minds I might not have done it either.'

In fact Neville Lee, 38, a Coal Board employee and Spectator reader from Mans- field Woodhouse in Nottinghamshire, was being held on the slender evidence of a sin- gle fingerprint. It was not, as it turned out, even his fingerprint, but it had points of similarity to one found at the scene of the rape, a lavatory.

Nottinghamshire police had picked up Mr Lee in August for another offence, indecent asault on a girl who he says he thought was 17, but who was 15, and who had gone with him into the woods of a local beauty spot, a few miles from Clum- ber Park,. This offence, thought serious enough, was, as his solicitor, Michael Pryor, says, relatively minor: Mr Lee was given a suspended prison sentence of 28 days. When they checked his record, the police found two earlier convictions, a decade or so old: gross indecency in public lavatories — or cottaging, as this consensu- al activity is colloquially known.

His past convictions would not have been admissible as evidence in court, but they were enough — and rightly — to alert the police. Their suspicion was entirely justifi- able. What is not so easy to understand is the reliance they appeared to place on the minimum of evidence. Mr Lee tried to remember his movements on the day of the rape: his memory was patchy. He co-oper- ated fully, giving them all the body samples they required for DNA tests, but he still does not know if there were any results. He was blond, as was the rapist, but no video ID parade was held, to try the girl's reac- tion to his face. Mr Lee is an intelligent man, with a gritty and dry wit: he made no false confession to complicate this case. `But I understand now', he says, 'how any- one young or without their wits about them would break down. At the end of the day they get onto you so much you begin to think black is white.' He was released on bail, then re-arrested. The police said they had substantial forensic evidence. This was, so far as Mr Lee and Michael Pryor are aware, only the fingerprint found in the Clumber Park lavatory, which was claimed to have 16 elements of similarity to Mr Lee's own.

There was, of course, strong public pres- sure on the police throughout this period to find the rapist. Mr Lee believes that, soon after his arrest, the police officers in the case closed their minds to the possibili- ty of his innocence. Once he was charged, and his name and photograph were in the papers so, it seemed, did the rest of the world.

He waited, vainly, in silence, in the prison hospital, to which he had asked to be moved, for the DNA tests to prove his Innocence. While he did so, he had time to study the expression in other men's eyes. `They look at you,' he says. 'And you can see what they're thinking. And you know that, in a way, they're right to look that way at someone who's done what they think you've done.'

That was the way he began to realise that the situation had changed, through the expression in other people's eyes. After about four weeks, he had been taken out of Lincoln prison for committal pro- ceedings in court. He had noticed in the police cells that they were looking at him in a different manner. Then a solicitor told him why: a man of 22 had been arrested for a serious assault on a 12-year-old boy In Clumber Park, and had then voluntarily admitted that he was, indeed, the Clumber Park rapist. Mr Lee was released into the comparative happiness of freedom: com- parative because the Coal Board, for whom he had worked for 20 years, had sacked him three weeks after he was charged and refused to reinstate him. Michael Pryor, his solicitor, is preparing actions against his employer for wrongful arrest and malicious prosecution, and against the prison authorities for failing to Protect him while in 'custody. Notting- hamshire Police say they are carrying out an internal review of the case. Meanwhile, Mr Lee, still jobless, waits. He does not think he will ever return to his former home, His bruises are fading, but he has trouble sleeping: snatches of conversation overheard in prison turn over and over in his mind. And yet he is, as he knows, even in this impoverished, lonely and haunted state, fortunate.

`On remand,' he says, 'I was guilty until proved innocent. I don't suppose that if it had come to court, I would have been con- victed on the evidence they had. But by that time it would have been a year later, the pressure to find a suspect would have been off the police. I've seen this sort of thing on TV. They're asked, outside the court, "Are you looking for any other sus- pect?" and they say, "No." And everyone knows what that means. Even if I'd been found innocent, no one would have believed me.'

And no one, I think, if he had been found guilty, would have campaigned for Mr Lee. The system of justice, the public, and sex offenders in Lincoln prison share at least some of the same kind of preju- dices. His is a frightening story, and I do not suppose it is unique.