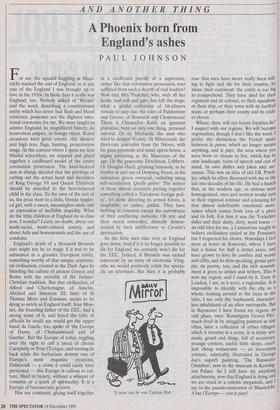 A Phoenix born from England's ashes

For me, the squalid haggling at Maas- tricht marked the end of England, or at any rate of the England I was brought up to love in the 1930s. In those days it really was England, too. Nobody talked of 'Britain' and the word, describing a constitutional entity which has never had flesh and blood existence, possesses not the slightest emo- tional resonance for me. We were taught to admire England, its magnificent history, its benevolent empire, its benign rulers. Royal occasions were great events: rich dinners and high teas, flags, bunting, presentation mugs. At the convent where I spent my first blissful schooldays, we snipped and glued together a cardboard model of the entire coronation procession. The kind-hearted nun in charge decided that the privilege of cutting out the actual head and shoulders of King George VI and Queen Elizabeth should be awarded to the best-behaved child in the class. To the envy of the rest of us, the prize went to a little, blonde-ringlet- ed girl, with a sweet, meaningless smile and an expression of ineffable stupidity. What do the little children of England do in class now, I wonder? Learn, no doubt, about our multi-racial, multi-cultural society, and about Aids and homosexuals and the use of condoms.

England's death of a thousand Brussels cuts might not be so tragic if it was to be subsumed in a grander European entity, something worthy of that unique continen- tal civilisation, created in the Dark Ages by blending the culture of ancient Greece and Rome with the morality of the Judaeo- Christian tradition. But that civilisation, of Alfred and Charlemagne, of Anselm, Abelard and Innocent III, later of St Thomas More and Erasmus, seems to be dying as surely as England itself. Jean Mon- net, the founding father of the EEC, had a strong sense of it, and hated the tribe of officials he could see would get the upper hand; de Gaulle, too, spoke of 'the Europe of Dante, of Chateaubriand and of Goethe'. But the Europe of today, niggling over the right to call a piece of cheese Caerphilly or Pont l'Eveque, and turning its back while the barbarians destroy one of Europe's most exquisite creations, Dubrovnik — a crime it could easily have prevented — this Europe is callous to cul- ture, blind to beauty, without a whisper of romance or a spark of spirituality. It is a Europe of bureaucratic grocers.

Has our continent, gluing itself together

in a cardboard parody of a superstate, rather like that coronation procession, ever suffered from such a dearth of real leaders? Now that Mrs Thatcher, who, with all her faults, had will and guts, has left the stage, what a pitiful collection of bit-players remain to step into the roles of Palmerston and Cavour, of Bismarck and Clemenceau! There is Chancellor Kohl, an ignorant philistine, bent on only one thing, personal survival. Or de Michaelis, the man who tried to despoil Venice. Or Mitterrand, the third-rate journalist from the Nievre, with his glass pyramids and tinsel opera-house, a pigmy posturing as the Maecenas of the age. Or the gruesome Dutchman, Lubbers. Or Douglas Hurd, grinning fatuously, as he bustles in and out of Downing Street, in his ridiculous green overcoat, radiating smug self-satisfaction. Quelle galere! The notion of these dismal creatures putting together something called a 'European foreign poli- cy', let alone directing its armed forces, is laughable; or rather, pitiful. They have nothing in common except the narrowness of their conflicting outlooks. Oh yes: and their moral cowardice, dismally demon- strated by their indifference to Croatia's destruction.

So the little men take over as England goes down. And if it is no longer possible to die for England, we certainly won't die for the EEC. Indeed, if Brussels was sacked tomorrow by an army of electronic Visig- oths we would positively relish the specta- cle on television. But then it is probably

`It turns out he was Captain Rob.'

true that men have never really been will- ing to fight and die for their country, let alone their continent: the entity is too big to comprehend. They have died for their regiment and its colonel, or their squadron, or their ship, or their town with its football team, or perhaps their county and its crick- et eleven.

Where, then, will our future loyalties lie? I suspect with our regions. We will become regionalists, though I don't like the word. I prefer the distinction the French make between la patrie, which no longer means anything, and le pays, the area where you were born or choose to live, which has its own landscape, turns of speech and cast of mind, its own dishes and jokes and sur- names. This was an idea of old J.B. Priest- ley, which he often discussed with me in the last two decades of his life. He had a hunch that, in the modern age, as nations were homogenised, men and women would turn to their regional contour and colouring for that almost indefinable emotional suste- nance which comes from love of a place and its folk. For him it was the Yorkshire dales and their dusty, dirty, wool towns an odd idea for me, a Lancastrian taught to believe civilisation ended at the Pennines, but I respected his choice. Nowadays I feel most at home in Somerset, where I have had a house for half a dozen years, and have grown to love its combes and woods and cliffs, and its slow-speaking, genial peo- ple; its poetry, too, and the rich nourish- ment it gives to artists and writers. This is now my region, and I stand by it. Even in London, I am, as it were, a regionalist. It is impossible to identify with the city as a whole: looking around at the faces in the tube, I see only the haphazard, character- less inhabitants of an alien metropolis. But in Bayswater I have found my region: an odd place, once 'Kensington Gravel Pits', much lived in by struggling painters in tiny villas, later a collection of urban villages, which it remains in a sense. It is richly aro- matic, grand and dingy, full of eccentrics, strange corners, useful little shops, excel- lent cheap restaurants — an interesting mixture, admirably illustrated in George Joy's superb painting, 'The Bayswater Omnibus', now in the museum in Kensing- ton Palace. So I still have my satisfying attachments, now that England is dying and we are stuck in a robotic megastate, and I say to the pseudo-statesmen of Maastricht: A bas l'Europe — vive le pays!