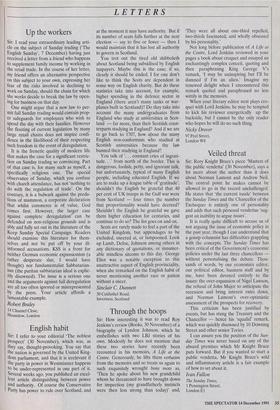 Sir: How interesting it was to read Roy Jenkins's review (Books, 30 November) of a biography of Lyndon Johnson, which he embellishes with two LBJ stories of his own. Modestly he does not mention that these two stories have recently been recounted in his memoirs, A Life at the Centre. Generously, he lifts them verbatim from the memoirs and so treats us again to such exquisitely wrought bons- moss as, `Then he spoke about his new grandchild whom he threatened to have brought down for inspection (my grandfatherly instincts were then less strong than today)' and,

`They were all about one-third repelled, two-thirds fascinated, and wholly obsessed by his personality.'

Not long before publication of A Life at the Centre, Lord Jenkins reviewed in your pages a book about croquet and essayed an enchantingly complex conceit, quoting and then paraphrasing King George V's remark, 'I may be uninspiring but I'll be damned if I'm an alien.' Imagine my renewed delight when I encountered this remark quoted and paraphrased no less wittily in the memoirs.

When your literary editor next plays cro- quet with Lord Jenkins, he may be tempted to kick his reviewer energetically up the backside, but I cannot be the only reader who hopes he will do no such thing.