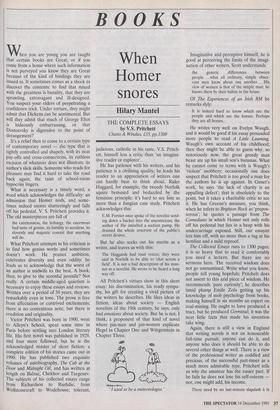 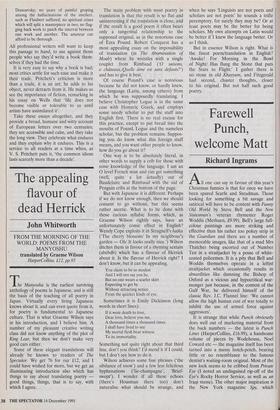 hen you are young you are taught that certain books are Great; or if you come from a home where such information is not purveyed you know they are Great because of the kind of bindings they are issued in. It sometimes comes as a shock to discover the contents: to find that mixed with the greatness is banality, that they are sprawling, extravagant and ill-designed. You suspect your elders of perpetrating a confidence trick. Under torture, they might admit that Dickens can be sentimental. But will they admit that much of George Eliot is hideously embarrassing, or that Dostoevsky is digressive to the point of derangement?

It's a relief then to come to a certain type of contemporary novel — the type that is tightly controlled and shapely, with its neat Pay-offs and cross-connections, its ruthless excision of whatever does not illustrate its author's slick skills. Someone who reads for pleasure may find it hard to take the road back again; the taint of school-room hypocrisy lingers.

What is necessary is a timely word, a word which acknowledges the difficulty: an admission that Homer nods, and some- times indeed snores shatteringly and falls off his pedestal. V. S. Pritchett provides it. The old masterpieces are full of

the carelessness, the lethargy, the enormous bad taste of genius, its liability to accident, its slovenly and majestic conceit that anything will do.

What Pritchett attempts in his criticism is to find how genius works and sometimes doesn't work. He praises ambition, celebrates diversity and even oddity; he leads us to acknowledge that the worst of an author is midwife to the best. A book, then, to give to the scornful juvenile? Not really. A certain middle-aged quietism is necessary to enjoy these essays and reviews. Written over a period of 50 years, they are remarkably even in tone. The prose is free from affectation or contrived excitements; there is no contentious note, but there is erudition and originality.

Victor Pritchett was born in 1900, went to Alleyn's School, spent some time in Paris before settling into London literary life. His first novel was published in 1929, and four more followed, but he is the acknowledged master of short fiction; a complete edition of his stories came out in 1990. He has published two exquisite volumes of autobiography, The Cab at the Door and Midnight Oil, and has written at length on Balzac, Chekhov and Turgenev. The subjects of his collected essays range from Richardson to Rushdie, from Wollstonecraft to Wodehouse; tolerant, judicious, catholic in his taste, V.S. Pritch- ett, himself less a critic than 'an imagina- tive reader or explorer'.

He has patience with his writers, and his patience is a civilising quality; he leads his reader to an appreciation of writers one can hardly bear to think about. Rider Haggard, for example, the tweedy Norfolk squire bemused and bedazzled by the feminine principle: it's hard to see him as more than a Jungian case study. Pritchett acknowledges this:

E.M. Forster once spoke of the novelist send- ing down a bucket into the unconscious; the author of She installed a suction pump. He drained the whole reservoir of the public's secret desires.

But he also seeks out his merits as a writer, and leaves us with this:

The Haggards had loud voices; they were said in Norfolk to be able to 'chat across a field'. It is not a bad description of his man- ner as a novelist. He wrote to be heard a long way off.

All Pritchett's virtues show in this short essay: his discrimination, his ready sympa- thy, his gift for creating a vivid picture of the writers he describes. He likes ideas in fiction, ideas about society — English novelists of the 19th century, he says, only had emotions about society. But he is not, I think, a proponent of that kind of novel where pin-men and pin-women explicate Hegel in Chapter One and Wittgenstein in Chapter Three.

' I used to be a meteorologist.' Imaginative and perceptive himself, he is good at perceiving the limits of the imagi- nation of other writers. Scott understands

the generic differences between people... what all ordinary, simple obser- vant men know about one another... His view of women is that of the simple man; he knows them by their habits in the house.

Of The Experiences of an Irish RM he remarks slyly:

He writes very well on Evelyn Waugh, and it would be good if his essay persuaded more people to read A Little Learning, Waugh's own account of his childhood; then they might be able to guess why, so notoriously now, the great greedy man beast ate up his small son's bananas. What he cannot come to terms with is Waugh's `violent' snobbery; occasionally one does suspect that Pritchett is too good a man for the authors he is up against. In Genet's work, he says 'the lack of charity is an appalling defect'; that is absolutely to the point, but it takes a charitable critic to see it. He has Greene's measure, you think, when he refers to Brighton Rock as 'prepos- terous'; he quotes a passage from The Comedians in which Homer not only rolls off his pedestal but lies in a heap with his undercarriage exposed. Still, our essayist lets him off, with no more than a tug at his hemline and a mild reproof.

The Collected Essays runs to 1300 pages; it is so heavy that to read it comfortably you need a lectern. But there are no sermons here. The received wisdom does not go unexamined. Write what you know, people tell young hopefuls; Pritchett does not assent to this arid piece of wisdom. He recommends 'pure curiosity'; he describes timid plump Emile Zola getting up his knowledge of mob psychology from books, making himself in six months an expert on coal-mining. He ought to have produced a tract, but he produced Germinal; it was the neat little facts that made his invention take wing.

Again, there is still a view in England that writing novels is not an honourable full-time pursuit; anyone can do it, and anyone who does it should be able to do several other things as well. There is a view of the professional writer as coddled and precious, of the successful part-timer as a much more admirable type. Pritchett tells us why the amateur has the easier part. If he fails he does not lose his self-esteem nor, one might add, his income.

There need be no last-minute slapdash a la Dostoevsky; no years of painful groping among the hallucinations of the intellect, such as Flaubert suffered; no spiritual crises which will split a masterpiece in two; no flag- ging hack work to patch the interval between one work and another. The amateur can afford to be thorough.. .

All professional writers will want to keep this passage to hand, to use against those people who say they'd write a book them- selves if they had the time.

It is very easy to say why a book is bad; most critics settle for such ease and make it their trade. Pritchett's criticism is more than a trade, it is an art; he adds to his object, never detracts from it. He makes us see the importance of fiction, remarking in his essay on Wells that 'life does not become visible or tolerable to us until artists have assimilated it'.

Take these essays altogether, and they provide a broad, humane and witty account of European letters over two centuries; they are accessible and calm, and they take the long view. They celebrate what endures and they explain why it endures. This is a service to all readers at a time when, as V. S. Pritchett puts it, 'the common idiom lasts scarcely more than a decade'.