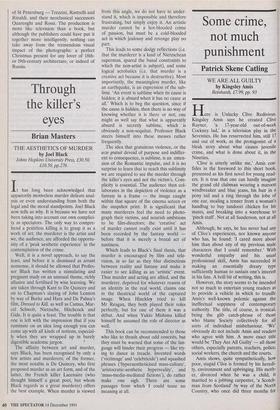 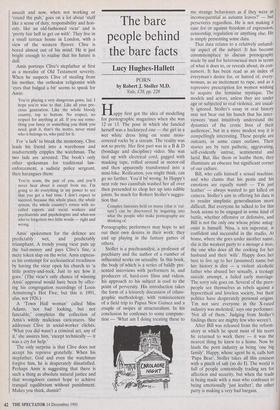 Some crime, not much punishment

WE ARE ALL GUILTY by Kingsley Antis Reinhardt, £7.99, pp. 93 Here is Unlucky Clive Redivivus. Kingsley Amis says he created Clive Rayner, 'a 17-year-old out-of-work Cockney lad,' in a television play in the Seventies. He has resurrected him, still 17 and out of work, as the protagonist of a bleak story about what causes juvenile crime, and what is done about it, in the Nineties.

`Clive is utterly unlike me,' Amis con- fides in the foreword to this short book, presented as his first novel for young read- ers. It is true that one can hardly imagine the grand old clubman wearing a maroon windbreaker and blue jeans, his hair in a pony tail and a ring through the lobe of one ear, stealing a tenner from a woman's handbag to buy tandoori chicken for his mates, and breaking into a warehouse to `pinch stuff. Not at all Sanderson, not at all Amis.

Although, he says, he has never had any of Clive's experiences, nor known anyone who has, he found: 'I cared more about him than about any of my previous male characters that I could remember.' With wonderful empathy and his usual professional skill, Amis has succeeded in making an essentially dreary type sufficiently human to sustain one's interest in his fate. A brill bit of writing, this is.

However, the story seems to be intended not so much to entertain young readers as to provide a vehicle in which to trundle Amis's well-known polemic against the ineffectual soppiness of contemporary authority. The title, of course, is ironical, being the glib catch-phrase of those who blame Society collectively for all sorts of individual misbehaviour. 'We' obviously do not include Amis and readers who agree with him. A more exact title would be 'They Are All Guilty' — all those others, especially parents, teachers, police, social workers, the church and the courts.

Amis shows, quite sympathetically, how poor, stupid Clive is formed by his heredi- ty, environment and upbringing. His moth- er, divorced when he was a child, is married to a jobbing carpenter, 'a Scotch- man from Scotland' by way of the North Country, who once did three months for

assault and now, when not working or `round the pub,' goes on a lot about 'stuff like a sense of duty, responsibility and hon- esty, like an old-fashioned vicar' and is `pretty fair hell to get on with'.. They live in a small terrace house in London, with a view of the western flyover. Clive is bored almost out of his mind. He is just bright enough to realise that his future is dull.

Amis portrays Clive's stepfather at first as a moralist of Old Testament severity. When he suspects Clive of stealing from his mother, the orthodox religionist with `eyes that bulged a bit' seems to speak for Amis:

You're playing a very dangerous game, lad. I hope you're wise to that. Like all your pre- cious generation. Like the whole bloody country, top to bottom. No respect, no respect for anything at all. If you see some- thing you fancy or something you think you need, grab it, that's the motto, never mind who it belongs to, who paid for it.

For 'a lark' to break the monotony, Clive leads his friend into a warehouse and inadvertently cripples the watchman. The two lads are arrested. The book's only other spokesman for traditional law- enforcement, a sadistic police sergeant, then harangues them:

You're scum, the pair of you, and you'll never hear about it except from me. I'm going to do everything in my power to see that you get a bad time. I don't expect to succeed, because this whole place, the whole system, the whole country's rotten with so- called experts and social workers and psychiatrists and psychologists and what-not who've forgotten two little words — right and wrong.

Amis' spokesmen for the defence are predictably wet, and predictably triumphant. A trendy young vicar puts up the bail-money and pays Clive's fine, a mere token slap on the wrist. Amis express- es his contempt for ecclesiastical trendiness by having the vicar open his church to 'a little poetry-and-rock. Just to see how it goes.' (The vicar's only chance of winning Amis' approval would have been by offer- ing his congregation recordings of Louis Armstrong's Hot Five; but this is 1991, alas, not 1926.) A 'Town Hall woman' called Miss Adams, 'not bad looking, but not fanciable,' completes the collection of Amis's wittily malicious caricatures. She addresses Clive in social-worker clichés. `What you did wasn't a criminal act, any of it,' she assures him, 'except technically — it was a cry for help.'

The only surprise is that Clive does not accept his reprieve gratefully. When his stepfather, God and even the watchman forgive him, he is desperately dissatisfied. Perhaps Amis is suggesting that there is such a thing as absolute natural justice and that wrongdoers cannot hope to achieve tranquil equilibrium without punishment. Makes you think, dunnit?