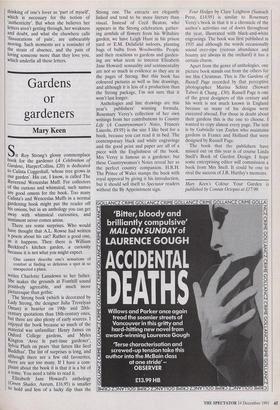 Sir Roy Strong's glossy commonplace book for the gardener (A Celebration of Gardens, HarperCollins, £20) is dedicated to Calista Coggeshall, 'whose tree grows in our garden'. His cat, I know, is called The Reverend Wenceslas Muff. For collectors of the curious and whimsical, such names are good omens for the book. Too many Calista's and Wenceslas Muffs in a normal gardening book might put the reader off his onions, but in an anthology you can get away with whimsical curiosities, and sentiment never comes amiss.

There are some surprises. Who would have thought that A.L. Rowse had written a Nein about his cat? Rather a good one, as it happens. Then there is William Beckford's kitchen garden, a curiosity because it is not what you might expect.

One cannot describe one's sensations of comfort at finding so delicious a spot in so unexpected a place, writes Charlotte Lansdown to her father. She makes the grounds at Fonthill sound positively agreeable, and much more picturesque than gothic. The Strong book (which is decorated by Lady Strong, the designer Julia Trevelyan Oman) is heavier on 19th- and 20th- century quotations than 18th-century ones, but there are also plenty of early sources. I enjoyed the book because so much of the material was unfamiliar: Henry James on Oxford College gardens, and Myles ICington 'Avec le part-time gardener', Sylvia Plath on pears 'that fatten like heel Buddhas'. The list of surprises is long, and although there are a few old favourites, there are not too many. If I have a corn- Plaint about the book it is that it is a bit of a tome. You need a table to read it.

Elizabeth Jane Howard's anthology (Green Shades, Aurum, £16.95) is smaller to hold and less of a lucky dip than the Strong one. The extracts are elegantly linked and tend to be more literary than visual. Instead of Cecil Beaton, who appears in the Strong celebration, gather- ing armfuls of flowers from his Wiltshire garden, we have Leigh Hunt in his prison yard or E.M. Delafield indoors, planting bags of bulbs from Woolworths. People and their reactions to gardens and garden- ing are what seem to interest Elizabeth Jane Howard: sensuality and sentimentality are not so much in evidence as they are in the pages of Strong. But this book has coloured pictures as well as line drawings, and although it is less of a production than the Strong package, I'm not sure that it won't last longer.

Anthologies and line drawings are this year's publishers' winning formula. Rosemary Verey's collection of her own writings from her contributions to Country Life (A Countrywoman's Notes, Frances Lincoln, £9.95) is the size I like best for a book, because you can read it in bed. The contemporary black and white engravings and the good print and paper are all of a piece with the Englishness of the book. Mrs Verey is famous as a gardener, but these Countrywoman's Notes reveal her as the perfect country companion. H.R.H. The Prince of Wales stamps the book with royal approval by giving it his introduction, but it should sell itself to Spectator readers without the By Appointment sign. Four Hedges by Clare Leighton (Sumach Press, £14.95) is similar to Rosemary Verey's book in that it is a chronicle of the author's activities out of doors throughout the year, illustrated with black-and-white engravings. The book was first published in 1935 and although the words occasionally sound over-ripe (riotous abundance and bounty are always in the orchard) it has a certain charm.

Apart from the genre of anthologies, one picture book stands out from the others for me this Christmas. This is The Gardens of Russell Page recorded by that perceptive photographer Marina Schinz (Stewart Tabori & Chang , £30). Russell Page is one of the great designers of this century and his work is not much known in England because so many of his designs were executed abroad. For those in doubt about their gardens this is the one to choose. I wanted to copy almost every page. The text is by Gabrielle van Zuylen who maintains gardens in France and Holland that were designed by Russell Page.

The book that the publishers have missed out on this year is of course Linda Snell's Book of Garden Design. I hope sonic enterprising editor will commission a book from Mrs Snell. It could be one to rival the success of J.R. Hartley's memoirs.

Mary Keen's Colour Your Garden is published by Conran Octopus at £17.99.