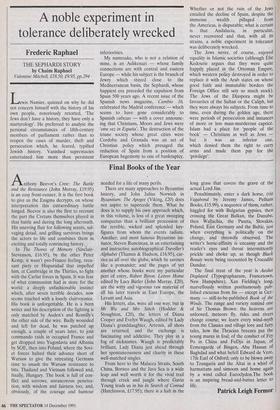 Final Books of the Year

Anthony Beevor's Crete: The Battle and the Resistance (John Murray, £19.95) is an easy front-runner. It is the first book to give us the Enigma decrypts, on whose interpretation this extraordinary battle hinged. Beevor is also the first to recount the part the Cretans themselves played in that battle and during the long aftermath. His unerring flair for following scents, sal- vaging detail, and grilling survivors brings the actors to life and combines them in exciting and totally convincing history. , In The Thorns of Memory (Sinclair- Stevenson, £16.95), by the other Peter Kemp, it wasn't pro-Franco feeling, recu- sant piety or Hispanidad that impelled him, at Cambridge in the Thirties, to fight with the Carlist forces in Spain. It was fear of what communism had in store for the world: a deeply unfashionable instinct which, after seven terrible decades, now seems touched with a lonely clairvoyance. His book is unforgettable. He is a born writer and his description of the fighting is only matched by Auden's . and Romilly's the other side of the wire. Badly wounded and left for dead, he was patched up enough, a couple of years later, to join commando raids in occupied France and get dropped into Yugoslavia and Albania by SOE, then into Poland, where the Sovi- et forces halted their advance short of Warsaw to give the retreating Germans time to smash the Warsaw resistance to bits. Thailand and Vietnam followed and, finally, Hungary. The book is full of con- flict and sorrows, unrancorous penetra- tion, with wisdom and fairness too, and, obviously, of the courage and humour

needed for a life of many perils. There are many approaches to Byzantine history, and John Julius Norwich in Byzantium: The Apogee (Viking, £20) does not aspire to supercede them. What he does is to supply his own approach which, in this volume, is less of a great sweeping conspectus than a brilliant procession of the terrible, wicked and splended key- figures from whom the events radiate. Another, and most famous Byzantine ini- tiator, Steven Runciman, in an entertaining and instructive autobiographical Traveller's Alphabet (Thames & Hudson, £16.95), car- ries us all over the globe, which he savours like a pomander; and the pages of yet another whose books were my particular port of entry, Robert Byron: Letters Home edited by Lucy Butler (John Murray, £20), are the witty and vigorous raw material of all his later travels in East Europe, the Levant and Asia.

His letters, alas, were all one way; but in Mr Wu and Mrs Stitch (Hodder & Stoughton, £20), the letters of Diana Cooper and Evelyn Waugh, edited by Lady Diana's granddaughter, Artemis, all shots are returned, and the exchange is fascinating and addictive. They play in a fog of nicknames. Waugh is predictably brilliant, Lady Diana just ahead through her spontaneousness and charity in these well-matched singles.

From here to the Malacca Straits, South China, Borneo and the Java Sea is a wide leap and well worth it for the vivid trail through creek and jungle where Gavin Young leads us in his In Search of Conrad (Hutchinson, £17.95); there is a halt in the long grass that covers the grave of the actual Lord Jim.

Penultimately, enter a dark horse, (viz Vagabond by Jeremy James, Pelham Books, £15.99), a sequence of them, rather, haggled for with Bulgarian gypsies, then crossing the Great Balkan, the Danube, then Wallachia, the Puszta, Slovakia, Poland, East Germany and the Baltic, just when everything is politically on the change, and shrewdly observed. The writer's hork-affinity is uncanny and the reader's eyes and throat intermittently prickle and choke up, as though Black Beauty were being recounted by Crocodile Dundee.

The final treat of the year is Aeolus Displayed (Typographaeum, Francetown, New Hampshire), Xan Fielding's long, marvellously written posthumously pub- lished excursus from his — except in Ger- many — still-to-be-published Book of the Winds. The range and variety remind one of Sir Thomas Brown: the heavens are unloosed, meteors fly, tides and rivers change course; we learn every wind-myth from the Classics and village lore and fairy tales, how the Thracian breezes put the young mares in foal; of the conduct of Fey Po in China and FuDju in Japan; of Ermengarde of Bingen, Abu Hassan of Baghdad and what befell Edward de Vere, 17th Earl of Oxford; only to be blown away to Tzungaria and the Altai in a whirl of harmattans and simoom and home again by a wind called Euroclydon.The book is an inspiring bread-and-butter letter to life.