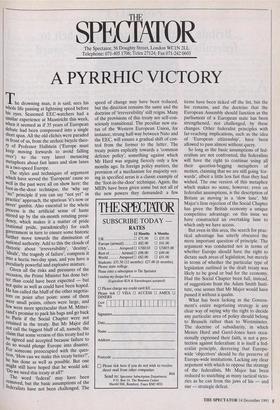 The drowning man, it is said, sees his whole life passing at lightning speed before his eyes. Seasoned EEC-watchers had a similar experience at Maastricht this week, when it seemed as if 35 years of European debate had been compressed into a single short span. All the old clichés were paraded in front of us, from the archaic bicycle theo- ry of Professor Hallstein (`Europe must keep moving forwards to avoid falling Over') to the very latest menacing metaphors about fast lanes and slow lanes in a two-speed Europe. The styles and techniques of argument which have served the 'European' cause so well in the past were all on show here: the foot-in-the-door technique, the 'why say "no" principle if you can say "not yet" in practice' approach, the spurious 'it's now or never' gambit. Also essential to the whole process is the artificial sense of haste stirred up by the six-month rotating presi- dency, which makes it a matter of pride (national pride, paradoxically) for each government in turn to ensure some historic further move towards the diminution of national authority. Add to this the clouds of rhetoric about 'irreversibility', 'destiny', `ideals', 'the tragedy of failure', compress it into a hectic two-day span, and you have a Peculiarly powerful and explosive mixture. Given all the risks and pressures of the occasion, the Prime Minister has done bet- ter than could have been expected — but not quite as well as could have been hoped. He has called the bluff of the other negotia- tors on point after point: some of them were small points, others were large, and few were more spectacular than M. Mitter- rand's promise to pack his bags and go back to Paris if the Social Chapter were not retained in the treaty. But Mr Major did not call the biggest bluff of all, namely, the claim that some version of this treaty had to be agreed and accepted because failure to 110 so would plunge Europe into disaster. For someone preoccupied with the ques- it,iim, 'How can we make this treaty better?', Ile has done as well as possible. But one rnight still have hoped that he would ask: 'bp we need this treaty at all?' The word 'federal' may have been lemoved but the basic assumptions of the federalists have not been challenged. The

speed of change may have been reduced, but the direction remains the same and the doctrine of 'irreversibility' still reigns. Many of the provisions of this treaty are self-con- sciously transitional. The peculiar new sta- tus of the Western European Union, for instance, strung half-way between Nato and the EEC, will ensure a gradual shift of con- trol from the former to the latter. The treaty points explicitly towards a 'common defence policy', something against which Mr Hurd was arguing fiercely only a few months ago. In foreign policy matters, the provision of a mechanism for majority vot- ing in specified areas is a classic example of the 'foot-in-the-door' technique. Again, the MEPs have been given some but not all of the new powers they demanded: a few items have been ticked off the list, but the list remains, and the doctrine that the European Assembly should function as the parliament of a European state has been strengthened, not challenged, by these changes. Other federalist principles with far-reaching implications, such as the idea of 'European citizenship', have been allowed to pass almost without query.

So long as the basic assumptions of fed- eralism are not confronted, the federalists will have the right to continue using all their question-begging metaphors of motion, claiming that we are still going 'for- wards', albeit a little less fast than they had wished. The one version of this metaphor which makes no sense, however, even on federalist assumptions, is the description, of Britain as moving in a 'slow lane'. Mr Major's firm rejection of the Social Chapter has given the British economy a unique competitive advantage: on this issue we have constructed an overtaking lane to which only we have access.

But even in this area, the search for prac- tical advantage has utterly obscured the more important question of principle. The argument was conducted not in terms of whether Europe should have the right to dictate such areas of legislation, but merely in terms of whether the particular type of legislation outlined in the draft treaty was likely to be good or bad for the economy. Had the Social Chapter been full, instead, of suggestions from the Adam Smith Insti- tute, one senses that Mr Major would have passed it without a qualm.

What has been lacking in the Govern- ment's entire negotiating strategy is any clear way of saying why the right to decide any particular area of policy should belong to Brussels rather than to Westminster. The doctrine of subsidiarity, in which Messrs Hurd and Garel-Jones have occa- sionally expressed their faith, is not a pro- tection against federalism: it is itself a fed- eralist principle, decreeing that Europe- wide 'objectives' should be the preserve of Europe-wide institutions. Lacking any clear argument with which to oppose the strategy of the federalists, Mr Major has been reduced to snatching as many tactical victo- ries as he can from the jaws of his — and our — strategic defeat.