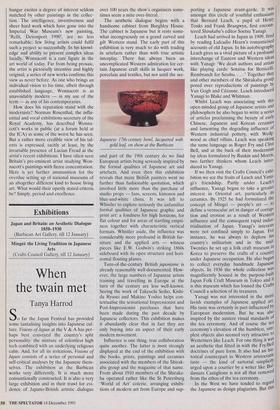 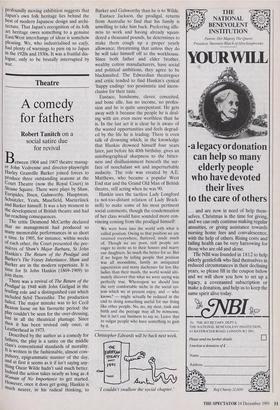 When the twain met

So far the Japan Festival has provided some tantalising insights into Japanese cul- ture. Visions of Japan at the V & A has per- haps best conveyed the country's split personality: the mixture of relentless high tech combined with an underlying religious calm. And, for all its irritations, Visions of Japan consists of a series of personal and self-critical analyses by the Japanese them- selves. The exhibition at the Barbican works very differently. It is much more conventionally constructed. It is also a very large exhibition and in their trawl for evi- dence of Japano-British artistic dialogue

over 100 years the show's organisers some- times seem a mite over-literal.

The aesthetic dialogue begins with a handsome cabinet from Burghley House. The cabinet is Japanese but it rests some- what incongruously on a grand carved and gilt Western stand. The early part of this exhibition is very much to do with trading in artefacts rather than with true artistic interplay. There has always been an uncomplicated Western admiration for cer- tain Japanese craft skills in lacquer work, porcelain and textiles, but not until the sec- Japanese 17th-century bowl, lacquered with gold leaf on show at the Barbican and part of the 19th century do we find European artists being seriously inspired by the formal qualities of Japanese art and artefacts. And even then this exhibition reveals that many British painters went no further than fashionable quotation, which involved little more than the purchase of studio props — fans, screens, kimonos and blue-and-white china. It was left to Whistler to explore seriously the unfamiliar formal qualities of Japanese graphic and print art: a fondness for high horizons, for flat colour and for areas of startling empti- ness together with characteristic vertical formats. Whistler aside, the influence was considerably more profound in British fur- niture and the applied arts — witness pieces like E.W. Godwin's striking 1860s sideboard with its open structure and hori- zontal floating planes.

Turn-of-the-century British japonisme is already reasonably well-documented. How- ever, the large numbers of Japanese artists training and travelling in Europe at the turn of the century are less well-known. Seeing the work of Takeuchi Seiho, Kishi- da Ryusei and Makino Yoshio helps con- textualise the sensational Impressionist and Post-Impressionist purchases that have been made during the past decade by Japanese collectors. This exhibition makes it abundantly clear that in fact they are only buying into an aspect of their early modern movement.

Influence is one thing, true collaboration quite another. The latter is most strongly displayed at the end of the exhibition with the books, prints, paintings and ceramics associated with the members of the Shirak- aba group and the magazine of that name. From about 1910 members of the Shiraka- ba operated rather like the St Petersburg `World of Art' coterie, arranging exhibi- tions of modern art from Europe and sup- porting a Japanese avant-garde. It was amongst this circle of youthful enthusiasts that Bernard Leach, a pupil of Henry Tonks and Frank Brangwyn, first encoun- tered Shirakaba's editor Soetsu Yanagi. Leach had arrived in Japan in 1909, fired by reading Lafcadio Hearn's romanticised accounts of old Japan. In his autobiography Leach gives us a vivid picture of a profound interchange of Eastern and Western ideas with Yanagi: 'We dealt authors and artists like playing cards: Sotatsu for Botticelli,

Rembrandt for Sesshu. ' Together they and other members of the Shirakaba grouP pored over reproductions of paintings by Van Gogh and Cezanne. Leach introduced Yanagi to Blake and Whitman.

Whilst Leach was associating with this open-minded group of Japanese artists and philosophers he also began to write a series of articles proclaiming the beauty of early Chinese, Japanese and Korean ceramics and lamenting the degrading influence of Western industrial pottery, with Wedg- wood as chief villain. Leach was speaking the same language as Roger Fry and Clive Bell, and at the back of their modernism lay ideas formulated by Ruskin and Morris, two further thinkers whom Leach intro- duced to Yanagi. If we then visit the Crafts Council's exhi- bition we see the fruits of Leach and Yana- gi's friendship. Partly under Leach's influence, Yanagi began to take a greater interest in Oriental art, particularly its ceramics. By 1925 he had formulated the concept of Mingei — people's art — to define a vernacular art in danger of corrup- tion and erosion as a result of Western influence and the consequent rapid indus- trialisation of Japan. Yanagi's interests were not confined simply to Japan. For instance, he was always to deplore his country's militarism and in the mid- Twenties he set up a folk craft museum in Korea to preserve the crafts of a country under Japanese occupation. He also began to collect everyday handmade Japanese objects. In 1936 the whole collection was magnificently housed in the purpose-built Japan Folk Craft Museum in Tokyo and it is this museum which has loaned the Crafts Council a selection of its treasures.

Yanagi was not interested in the more lavish examples of Japanese applied art. His taste was certainly in part influenced by European modernism. But he was also,. inspired by the austere visual standards of the tea ceremony. And of course the tea ceremony's elevation of the humblest, sim- plest objects also seemed very attractive to Westerners like Leach. For one thing it was an aesthetic that fitted in with the Fry/Bell doctrines of pure form. It also had an his- torical counterpart in Western aristocratic taste — the kind of sartorial simplicity urged upon a courtier by a writer like Hai' dassare Castiglione is not all that removed from the ethos of the tea ceremony.

In the West we have tended to regard the Japanese as design plagiarists. But this profoundly moving exhibition suggests that Japan's own folk heritage lies behind the best of modern Japanese design and archi- tecture. That Japan's recognition of its folk art heritage owes something to a genuine East/West interchange of ideas is somehOw pleasing. We, who industrialised so early, had plenty of warnings to pass on to Japan in the 1920s and 1930s, It was a fruitful dia- logue, only to be brutally interrupted by war.