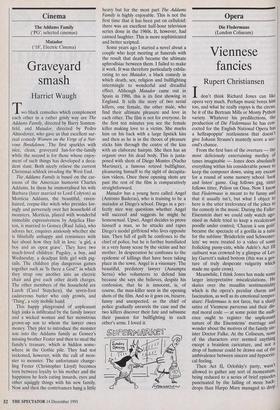 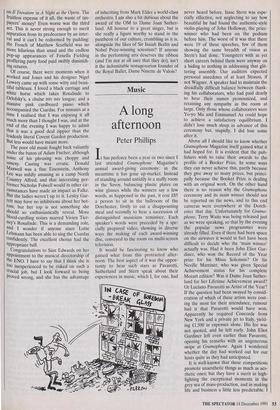 Idon't think Richard Jones can like opera very much. Perhaps music bores him too, and what he really enjoys is the circus, be it of the Bertram Mills or Monty Python variety. Whatever his predilections, the production of Die Fledermaus he has con- cocted for the English National Opera has a hellzapoppin' restlessness that doesn't give Johann Strauss's masterly score a sec- ond's chance.

From the first bars of the overture — the most deliciously entertaining medley of tunes imaginable — Jones does absolutely everything within his considerable power to keep the composer down, using any excuse for a round of some nursery school look and listen' game. Gag follows gag, titter follows titter, Pelion on Ossa. Now I know that Fledermaus is meant to be funny and that it usually isn't, but what I object to here is the utter irrelevance of the jokes to the comedy in the music. During the Falke- Eisenstein duet we could only watch ago- nised as Adele tried to keep a recalcitrant poodle under control; `Chacun a son goat' became the spectacle of a gorilla in a tutu; for the sublime 'Briiderlein and Schwester- lein' we were treated to a video of some frolicking pussy-cats, while Adele's Act III outburst was crowned by a glimpse of Les- ley Garrett's naked bottom (this was a ges- ture of truly desperate vulgarity which made me quite cross).

Meanwhile, I think Jones has made some larger interpretative miscalculations. He skates over the maudlin sentimentality which is the opera's peculiar charm and fascination, as well as its emotional temper- ature: Fledermaus is not farce, but a sharp satire of Viennese parvenus and their dis- mal moral code — at some point the audi- ence ought to register the unpleasant nature of the Eisensteins' marriage and wonder about the motives of the faintly sin- ister Doctor Falke. At the Coliseum, none of the characters ever seemed anything except a brainless caricature, and not a drop of humour could be drawn out of the ambivalence between sincere and hypocriti- cal feeling. Then Act II, Orlofsky's party, wasn't allowed to gather any sort of momentum, being reduced to a series of brief episodes punctuated by the falling of more back- drops than Harpo Marx managed to drop on Il Trovatore in A Night at the Opera. The fruitless expense of it all, the waste of tax- payers' money! Even worse was the third act. This is never strong enough to merit separation from its predecessor by an inter- val and it can't be redeemed by padding: the Frosch of Matthew Scurfield was no more hilarious than usual and the endless Pop-up appearances of Fenella Fielding proffering party food paid swiftly diminish- ing returns.

Of course, there were moments when it worked and Jones and his designer Nigel Lowery came up with some witty and beau- tiful tableaux. I loved a black carriage and white horse which takes Rosalinde to Orlofsky's, a chaise tres tres longue, and a massive pink cardboard piano which accompanied the Csardas. For minutes at a time I realised that I was enjoying it all much more than I thought I was, and at the end of the evening I was happy to admit that it was a good deal zippier than the leadenly literal Covent Garden production. But less would have meant more.

The poor old music fought back valiantly under the baton of Adam Fischer, although some of his phrasing was choppy and unsexy. Casting was erratic. Donald Maxwell was a fine Eisenstein, Anthony Lee was mildly amusing as a camp North Country Alfred, and that interesting per- former Nicholas Folwell would in other cir- cumstances have made an impaCt as Falke. But the ladies weren't up to it. Lesley Gar- rett may have no inhibitions about her bot- tom, but her top is not something she should so enthusiastically reveal. More blood-curdling noises marred 'Vivien Tier- ney's Rosalinde. This is a demanding role, and I wonder if anyone since Lotte Lehmann has been able to sing the Csardas confidently. The excellent chorus had the appropriate ball. Congratulations to Sian Edwards on her appointment to the musical directorship of the ENO. I have to say that I think she is too inexperienced to be risked on such a crucial job, but I look forward to being Proved wrong, and she has the advantage

of inheriting from Mark Elder a world-class orchestra. I am also a bit dubious about the award of the OM to Dame Joan Suther- land. All honour to a great singer, but is she really a figure worthy to stand in the pantheon of our culture, crumbling as it is, alongside the likes of Sir Isaiah Berlin and Nobel Prize-winning scientists? If anyone in the performing arts deserves the ribbon (and I'm not at all sure that they do), isn't it the indomitable nonagenarian founder of the Royal Ballet, Dame Ninette de Valois?