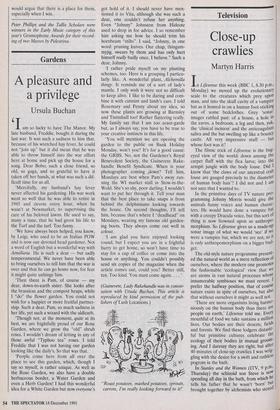 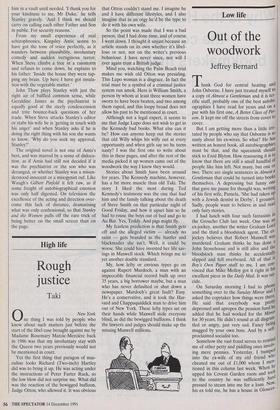 In Lifesense this week (BBC 1, 8.30 p.m., Monday) we moved up the evolutionary scale to the creatures which prey upon man, and into the skull cavity of a vampire bat as it homed in on a human foot sticking out of some bedclothes. Grey 'sonar images rattled past: of a house, a hole in the eaves, a bedroom, a leg and then, yuk, the 'clinical incision' and the anticoagulant saliva and the bat swelling up like a bouncy castle. All very impressive stuff — but whose foot was it?

The filmic trick of Lifesense is the bug- eyed view of the world: down among the carpet fluff with the flea larva; into the armpit jungle with the body louse. Did I know that 'the claws of our ancestral crab louse are gauged precisely to the diameter of human body hair'? I did not and I am not sure that I wanted to.

In the primitive days of TV nature pro- gramming Johnny Morris would give the animals funny voices and human charac- ters. He would have done a vampire bat with a creepy Dracula voice, but this sort of thing is now frowned upon as anthropo- morphism. So Lifesense gives us a made-up sonar image of what we would 'see' if we were a vampire bat, which we are not, so it is only anthropomorphism on a bigger bud- get.

The old-style nature programme present- ed the natural world as a mere reflection of ourselves, where the modern one promotes the fashionable 'ecological' view that we are atoms in vast natural processes whose innumerable symbioses we must revere. I prefer the halfway position, that of course nature exists in spite of ourselves, but also that without ourselves it might as well not.

'There are more organisms living harmo- niously on the human body than there are people on earth,' Lifesense told me. Even' mouthful of food we take sustains a million lives. Our bodies are their deserts, fields and forests. We find these lodgers distaste- ful but primitive cultures celebrate the ecology of their bodies in mutual groom" ing. And I daresay they are right, but after 40 minutes of close-up crawlies I was wrig- gling with the desire for a swift and ruthless pogrom in the bath. In Stanley and the Women (ITV, 9 po., Thursday) the schizoid son Steve is noW spending all day in the bath, from which he tells his father that he wasn't 'born' but, brought together by alchemists who stored

him in a vault until needed. 'I thank you for your kindness to me, Mr Duke,' he tells Stanley gravely. 'And I think we should carry on calling each other Father and Son in public. For security reasons.'

From my small experience of real schizophrenics, Kingsley Amis seems to have got the tone of voice perfectly, as it wanders between plausibility, involuntary comedy and sudden vertiginous terror. When Steve climbs a tree in a rainstorm and refuses to come down, he explains to his father: 'Inside the house they were tap- ping my brain. Up here I have got insula- tion with the vegetable matter.'

John Thaw plays Stanley with just the right air of baffled common sense, while Geraldine James as the psychiatrist is equally good at the steely condescension and trite bounce-back questions of her trade. When Steve attacks Stanley's editor or stabs his wife he is 'getting in touch with his anger' and when Stanley asks if he is doing the right thing with his son she wants to know, 'Why do you seek my approval, Stanley?'

The original novel is not one of Amis's best, and was marred by a sense of disloca- tion, as if Amis had still not decided if it was the psychiatrist or the son who was deranged, or whether Stanley was a misun- derstood innocent or a misogynist oaf. Like Waugh's Gilbert Pinfold it felt raw, as if some freight of autobiographical emotion was only half digested. On television the excellence of the acting and direction over- come this lack of distance, dramatising what was only confessional, so that Stanley and the Women pulls off the rare trick of being better on the small screen than on the page.