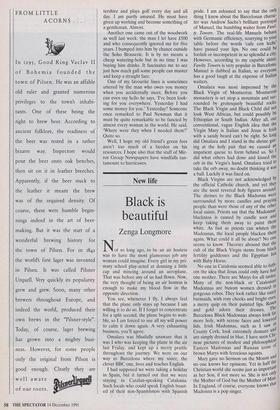 Not so long ago, to be an air hostess was to have the most glamorous job any woman could imagine. Every girl in my pri- mary school play-acted at donning a little cap and mincing around an aeroplane. That was before any of us had flown. Now, the very thought of being an air hostess is enough to make my blood flow in the opposite direction.

You see, whenever I fly, I always feel that the plane only stays up because I am willing it to do so. If I forget to concentrate for a split second, the plane begins to wob- ble, so I am forced to use all my will power to calm it down again. A very exhausting business, you'll agree.

Omalara was blissfully unaware that it was I who was keeping the plane in the air last Friday, and kept up a merry prattle throughout the journey. We were on our way to Barcelona where my sister, the clever BBC one, lives and teaches English.

I had supposed we were taking a holiday in Spain, but it turned out that we were staying in Catalan-speaking Catalonia. Such locals who could speak English boast- ed of their non-Spanishness with Spanish

pride. I am ashamed to say that the only thing I knew about the Barcelonan charac- ter was Andrew Sachs's brilliant portrayal of Manuel, the bumbling waiter from Fawl- ty Towers. The real-life Manuels behave with Germanic efficiency, scurrying to your table before the words 'cafe con leche have passed your lips. No one could be foolish or incompetent in so splendid a citY. However, according to my capable sister, Fart* Towers is very popular in Barcelona. Manuel is dubbed as Italian, so everyone has a good laugh at the expense of Italian waiters.

Omalara was most impressed by the Black Virgin of Montserrat. Montserrat monastery is set atop a mountain and sur- rounded by grotesquely beautiful rocks. The Black Virgin and Black Child did not look West African, but could possibly be Ethiopian or South Indian. After all, our conventional, vague English idea that the Virgin Mary is Italian and Jesus is Irish with a sandy beard can't be right. So long did Omalara and I stand in the shrine gaz- ing at the holy pair that we caused all impatient queue to form behind us. So I did what others had done and kissed the orb in the Virgin's hand. Omalara tried to take the orb away, no doubt thinking it was a ball. Luckily it was fixed on. Black Virgins are not acknowledged by the official Catholic church, and yet they are the most revered holy figures around. The shrines to the Black Madonna were surrounded by more candles and praying people than were those of any of the other local saints. Priests say that the Madonnas blackness is caused by candle soot and keep taking them away to paint them white. As fast as priests can whiten the Madonnas, the local people blacken them again. What could it all be about? No one seems to know. Theories abound that the cult of the Black Virgin stems from black fertility goddesses and the Egyptian Isis with Baby Horus. No one in Catalonia seemed able to fath- om the idea that Jesus could only have had one mother. There are Marys for all tastes, Many of the non-black or Catalonian Madonnas are buxom women dressed in gorgeous robes. They look rather like saueY barmaids, with rosy cheeks and bright eyes' a merry quip on their painted lips. Roses and gold adorn their dresses. The Barcelona Black Madonnas always look far ,4 more holy, with serene faces and lowereu lids. Irish Madonnas, such as I saw ill, County Cork, look extremely ,demure and are simply dressed in blue. I have seen Chi- nese pictures of modest and philosophie3,, Eastern Madonnas and Russian icons 0' brown Marys with ferocious squints. Mary gave no Sermon on the Mount and no one knows her opinions. Yet in half the. Christian world she seems just as important as her Son, if not more so. She is not onlY the Mother of God but the Mother of Mall: In England, of course, everyone knows that Madonna is a pop singer.