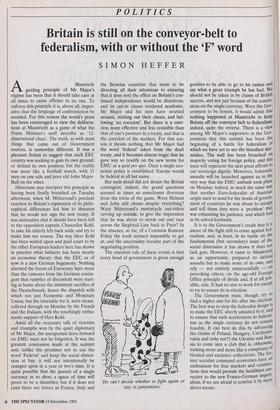 Britain is still on the conveyor-belt to federalism, with or without the 'F' word

Maastricht A guiding principle of Mr Major's regime has been that it should take care at all times to cause offence to no one. To enforce this principle it is, above all, imper- ative that the language of confrontation be avoided. For this reason the world's press has been encouraged to view the delibera- tions at Maastricht as a game of what the Prime Minister's staff describe as '12- dimensional chess'. The truth, as with most things that come out of Government sources, is somewhat different. It was a pleasant fiction to suggest that each EEC country was seeking to gain its own ground, or defend its own position; but the reality was more like a football match, with 11 men on one side and poor old John Major- Bull on the other.

Historians may interpret this principle as having been finally breached on Tuesday afternoon, when M. Mitterrand's petulant reaction to Britain's expression of its philo- sophical differences led him to threaten that he would not sign the new treaty. It was instructive that it should have been left to the opposition captain, Chancellor Kohl, to take his elderly left-back aside and try to make him see reason. The way Herr Kohl has been waited upon and paid court to by the other European leaders here has shown in practice what hitherto has been mostly an economic theory: that the EEC as of now is a new German hegemony. Nothing alarmed the forces of Eurocracy here more than the rumours from the German contin- gent that rumbles of discontent were start- ing at home about the imminent sacrifice of the Deutschmark; hence the dispatch with which not just Economic and Monetary Union, but the timetable for it, were steam- rollered through on Monday by the French and the Italians, with the touchingly enthu- siastic support of Herr Kohl.

Amid all the necessary talk of victories and triumphs won by the quiet diplomacy of Mr Major, the unexpected drive forward on EMU must not be foigotten. It was the greatest concession made at the summit and, unlike the promises not to use the word 'Federal' and keep the social dimen- sion at bay, it will not intentionally be reneged upon in a year or two's time. It is quite possible that the pursuit of a single currency in so short a space of time will prove to be a shambles; but if it does not (and there are forces in France, Italy and

the Benelux countries that seem to be diverting all their attentions to ensuring that it does not) the effect on Britain's con- tinued independence would be disastrous, and its opt-in clause rendered academic. Mr Major and his men have strutted around, sticking out their chests, and bel- lowing `no coercion'. But there is a coer- cion more effective and less resistible than that of one's partners in a treaty, and that is the coercion of the markets. For that rea- son it means nothing that Mr Major had the word 'federal' taken from the draft treaty, and it becomes almost tragic that he gave way so readily on the new terms for EMU as a quid pro quo. Once a single eco- nomic policy is established, Europe would be federal in all but name.

But such detail did not detain the British contingent; indeed, the grand questions seemed at times an unwelcome diversion from the trivia of the game. Were Helmut and John still chums despite everything? Were Mitterrand's motorcycle out-riders revving up outside, to give the impression that he was about to storm out and race across the Siegfried Line back to Paris? In the absence, so far, of a Common Rumour Policy the truth seemed impossible to get at, and the uncertainty became part of the negotiating position.

The essential rule of these events is that every head of government is given enough `He can't decide whether to fight again or stay in pantomime.' goodies- to be able to go to his nation and say what a great triumph he has had. We should not be taken in by claims of British success, and not just because of the conces- sions on the single currency. Were the Gov- ernment to be honest, it would admit that nothing happened at Maastricht to keep Britain off the conveyor belt to federalism; indeed, quite the reverse. There is a view among Mr Major's supporters in the Gov- ernment that this summit has been the beginning of a battle for federalism of which we have yet to see the bloodiest skir- mishes. The wall has been breached on majority voting for foreign policy, and this issue will represent the next great affront to our sovereign dignity. Moreover, federastie assaults will be launched against us in the very way that the EMU ambush took place on Monday; indeed, in much the same way that another Euro-federalist of Austrian origin used to send for the heads of govern- ment of countries he was about to occupy and tell them they were a 'problem' that was exhausting his patience, and which had to be solved forthwith.

It is to the Government's credit that it is aware of the fight still to come against fed- eralism; and, at least, in its battle on the fundamental (but secondary) issue of the social dimension it has shown it does not lack guts. However, it came to Maastricht as an opportunist, prepared to defend assaults but to make none of its own, and rely — not entirely unsuccessfully — on provoking others, on the age-old Foreign Office principle of divide and, if at all pos- sible, rule. It had no aim to work for except to try to ensure its re-election. The Government must, though, try to find a higher aim for life after the election. The best way to stop the federalist design is to make the EEC utterly unsuited to it, and to ensure that such accelerators to federal- ism as the single currency do not remain feasible. It can best do this by advancing the claims of Poland, Hungary, Czechoslo- vakia and (why not?) the Ukraine and Rus- sia to come into a club that is, otherwise, looking more and more like a conspiracy of bloated and exclusive collectivists. The for- mer socialist command economies have an enthusiasm for free markets and constitu- tions that would provide the healthiest cor- rective to the new Franco-German imperi- alism, if we are afraid to combat it by more direct means.