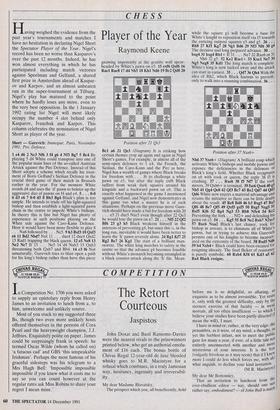 Player of the Year

Having weighed the evidence from the past year's tournaments and matches I have no hesitation in declaring Nigel Short the Spectator Player of the Year. Nigel's record has been no worse than Kasparov's over the past 12 months. Indeed, he has won almost everything in which he has participated including match victories against Speelman and Gelfand, a shared first prize in Amsterdam ahead of Kaspar- ov and Karpov, and an almost unbeaten run in the super-tournament at Tilburg. Nigel's play has matured to the point where he hardly loses any more, even to the very best opposition. In the 1 January 1992 rating list Nigel will most likely occupy the number 4 slot behind only Kasparov, Ivanchuk and Karpov. This column celebrates the nomination of Nigel Short as player of the year.

Bel a6 21 Qe3 (Diagram) It is striking how certain themes crop up again and again in Nigel Short's games. For example, in almost all of the semi-open defences to 1 e4, the French, the Sicilian, the Caro-Kann and the Pirc as here, Nigel has a wealth of games where Black breaks for freedom with . . f6 to challenge a white pawn on e5, but after the reply exf6 Black suffers from weak dark squares around his kingside and a backward pawn on e6. This is exactly what happened in the game I mentioned against Gelfand, and Nigel now demonstrates in this game too what a master he is of such situations. Perhaps on the previous move Gure- vich should have made a bid for freedom with 20 . . . e5 21 dxe5 Nxe5 even though after 22 Qe3 he would lose the pawn on a7. 21 . . . Nf5 22 Qf2 Bf6 23 g3 h5 Black weakens himself in the interests of preventing g4, but since this is, in the long run, inevitable it would have been better to leave the 'h' pawn severely alone. 24 Rgl Kf7 25 Rg2 Be7 26 Kgl The start of a brilliant man- oeuvre. The white king marches to safety in the centre so that the advance g4 becomes feasible without White's monarch becoming entangled in a black counter-attack along the 'h' file. Mean- while the square gl will become a base for White's knight to reposition itself via f3 towards the enticing outpost squares e5 and g5. 26 . • • Rh8 27 Kfl Kg7 28 Ngl Bd6 29 Nf3 Nf6 30 g4 The decisive and long prepared advance. 30 . • • hxg4 31 hxg4 Rhl + If 31 . . . Ne7 32 Rxe6 or 31 . . . Nh6 32 g5. 32 Keg Rxel+ 33 Kxel Ne7 34 Ng5 NegS 35 Kdl The long march is complete. White's king is now tucked away and the attack can start in earnest. 35 . . . Qd7 36 Qh4 With the idea of Rh2, which Black hastens to prevent, only to walk into a stunning combination. 36 . • •