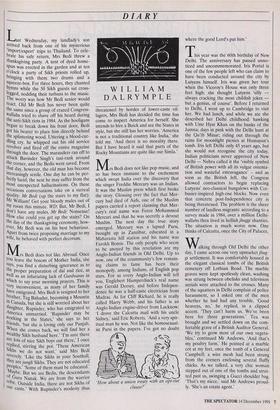 WILLIAM DALRYMPLE Last Wednesday, my landlady's son arrived back from one of his mysterious import/export' trips to Thailand. To cele- brate his safe return, Mrs Bedi threw a thanksgiving party. A tent of dyed home- spun was erected in the garden and at ten o'clock a party of Sikh priests rolled up, bringing with them._ two drums and a squeeze-box. For three hours, they chanted hymns while the 50 Sikh guests sat cross- legged, nodding their turbans to the music. The worry was how Mr Bedi senior would react. Old Mr Bedi has never been quite the same since a group of crazed Congress- wallahs tried to shave off his beard during the anti-Sikh riots in 1984. As the hooligans began to break down his front door, Bedi got his bearer to place him directly behind the splintering wood. Uttering a blood-cur- dling cry, he whipped out his old service revolver and fired off the entire magazine through the door. The marauders ran off to attack Bavinder Singh's taxi-rank around the corner, and the Bedis were saved. From that day, however, the old man has become Increasingly senile. One day he can be per- fectly lucid; the next he may suffer from the most unexpected hallucinations. On these occasions conversations take on a surreal quality: Mr Bedi (up the stairs to my flat): Mr William! Get your bloody mules out of my room this minute. WD: But, Mr Bedi, I don't have any mules. Mr Bedi: Nonsense! How else could you get up the stairs? On the day of the thanksgiving ceremony, how- ever, Mr Bedi was on his best behaviour. Apart from twice proposing marriage to my wife, he behaved with perfect decorum.

Mrs Bedi does not like Abroad. Once You leave the bosom of Mother India, she says, you find a disturbing ignorance as to the proper preparation of dal and rice, as well as an infuriating lack of Gurdwaras in which to say your morning prayers. This is very inconvenient, as many of her family have emigrated. Mrs Bedi is resigned to her brother, Teg Bahadur, becoming a Mountie in Canada, but she is still worried about her daughter, Rupinder, who has emigrated to America unmarried. `Rupinder may be working in the States,' she says to her friends, 'but she is loving only our Punjab. When she comes back, we will find her a wealthy Sikh husband here.' I'm sure there are lots of nice Sikh boys out there,' I once replied, stirring the pot. 'These American Sikhs we do not want,' said Mrs Bedi severely. 'Like the Sikhs in your Southall, they are jungli Sikhs. They are not educated PeoPles."Some of them must be educated.° Maybe. But we are Bedis, the descendants of Guru Nanak. We are from the warrior tribe. Outside India, there are not Sikhs of our caste.' With Rupinder's modesty thus

threatened by hordes of lower-caste vil- lagers, Mrs Bedi has decided the time has come to inspect America for herself. She intends to hire a Buick and see the States in style, but she still has her worries. 'America is not a traditional country like India,' she told me. 'And there is no morality there. But I have heard it said that parts of the Rocky Mountains are quite like our Simla.'

Mrs Bedi does not like pop music, and so has been immune to the excitement which swept India over the discovery that the singer Freddie Mercury was an Indian. It was the Muslim press which first broke the story. Glossing over the fact that Mer- cury had died of Aids, one of the Muslim papers carried a report claiming that Mer- cury's real name was Feroz Mohammed Mercuri and that he was secretly a devout Muslim. The next day the true story emerged. Mercury was a lapsed Parsi, brought up in Zanzibar, educated in a Maharasta hill station and his name was Farokh Bomie. The only people who seem to be anoyed by this revelation are my Anglo-Indian friends in Old Delhi. Up to now, one of the coummunity's few remain- ing claims to fame has been their monopoly, among Indians, of English pop stars. For as every Anglo-Indian will tell you, Englebert Humperdinck's real name was Gerald Dorsey, and before Indepen- dence he was a half-caste electrician from Madras. As for Cliff Richard, he is really called Harry Webb, and his father is an Anglo-Indian engine-driver from Lucknow: 'I drove the Calcutta mail with his uncle Sidney,' said Eric Roberts. 'And a very spir- itual man he was. Not like the homosexual- ist Parsi in the papers. I've got no doubt 'How about a union treaty with an opt-out clause?' where the good Lord's put him.'

This year was the 60th birthday of New Delhi. The anniversary has passed unno- ticed and uncommemorated. Iris Portal is one of the few people left who can claim to have been conducted around the city by Lutyens himself. Iris was given her tour when the Viceroy's House was only three feet high; she thought Lutyens 'silly always cracking the most childish jokes but a genius, of course'. Before I returned to Delhi, I went up to Cambridge to visit her. We had lunch, and while we ate she described her Delhi childhood: hawking with Umr Hyat Khan on the banks of the Jumna; days in pink with the Delhi hunt at the Qu'tb Minar; riding out through the ruins for moonlight picnics at Humayun's tomb. Iris left Delhi only 45 years ago, but she would not recognise the city today. Indian politicians never approved of New Delhi — Nehru called it the 'visible symbol of British power with all its vulgar ostenta- tion and wasteful extravagance' – and as soon as the British left, the Congress allowed contractors to begin replacing Lutyens' neo-classical bungalows with Cor- busier-inspired high-rise blocks. Now even that concrete post-Independence city is being threatened. The problem is the sheer number of landless migrants: according to a survey made in 1984, over a million Delhi- wallahs then lived in hellish jhuggi shanties. The situation is much worse now. One thinks of Calcutta, once the City of Palaces.

Walking through Old Delhi the other day, I came across one very upmarket jhug- gi settlement. It was comfortably housed in the elegant classical tombs of the British cemetery off Lothian Road. The marble graves were kept spotlessly clean, washing was strung between obelisks and television aerials were attached to the crosses. Many of the squatters in Delhi complain of police harassment, so I asked one of the men whether he had had any trouble. 'Good heavens, no,' he replied, in a clipped accent. 'They can't harm us. We've been here for three generations.' Tea was brought and we settled down on the com- fortable grave of a British Auditor General. 'We try to grow most of our own vegeta- bles,' continued Mr Andrews. 'And that's my poultry farm.' He pointed at a marble cot at my feet, once the tomb of a General Campbell; a wire mesh had been strung from the corners enclosing several fluffy chicks. As we talked, a very chic worn an stepped out of one of the tombs and strut- ted past us, swinging a Gucci shoulder bag. 'That's my niece,' said Mr Andrews proud- ly. 'She's an estate agent.'