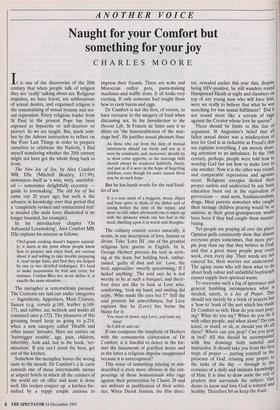 Naught for your Comfort but something for your joy

The New Joy of Sex, by Alex Comfort MB, DSc (Mitchell Beazley, £17.99), announces itself as 'a wise, witty, uninhibit- ed — sometimes delightfully eccentric guide to lovemaking'. The old Joy of Sex came out 20 years ago, but such is the advance in knowledge over that period that a 'completely revised and restructured text' is needed (the male lover illustrated is no longer bearded, for example).

In his introductory chapter 'On Advanced Lovemaking', Alex Comfort MB, DSc explains his mission as follows:

Chef-grade cooking doesn't happen natural- ly: it starts at the point where people know how to prepare and enjoy food, are curious about it and willing to take trouble preparing it, read recipe hints, and find they are helped by one or two detailed techniques. It's hard to make mayonnaise by trial and error, for instance. Cordon Bleu sex, as we define it, is exactly the same situation ...

The metaphor is remorselessly pursued. The Contents are laid out under categories — Ingredients, Appetisers, Main Courses, Sauces (e.g. corsets p.169, leather p.169- 171, and rubber, ice, wetlook and masks all crammed onto p.172). The pleasures of this groaning board keep us going to p.214, when a new category called 'Health and other issues' intrudes. Here are entries on `hairtrigger trouble', age, pain, children, infertility, Aids and, last in the book, 'ter- mination'. If you can't stand the heat, get out of the kitchen.

Somehow the metaphor leaves the wrong taste in the mouth. Dr Comfort's a la carte reminds one of those interminable menus at airport hotels in which all the cuisines of the world are on offer and none is done well. His recipes conjure up a kitchen fur- nished by a yuppy couple anxious to impress their friends. There are woks and Moroccan coffee pots, pasta-making machines and waffle irons. It all looks very exciting. If only someone had taught them how to cook bacon and eggs.

Dr Comfort is not the first, of course, to have recourse to the imagery of food when discussing sex. In his Introduction to the Devout Life, St Francis de Sales uses it to dilate on 'the honourableness of the mar- riage bed'. He justifies sexual pleasure thus:

As those who eat from the duty of mutual intercourse should eat freely and not as it were by constraint, and, moreover, should try to show some appetite, so the marriage debt should always be rendered faithfully, freely, and just as if it were in the hope of begetting children, even though for some reason there may be no such hope.

But he has harsh words for the real food- ies of sex:

It is a true mark of a beggarly, mean, abject and base spirit to think of the dishes and of eating before the time of the repast, and more so still, when afterwards one is taken up with the pleasure which one has had in the meal, dwelling upon it in words and thoughts.

The culinary conceit occurs naturally, it seems, in any description of love, human or divine. Take 'Love III', one of the greatest religious lyric poems in English. In it, George Herbert pictures his soul as arriv- ing at the feast, but holding back, embar- rassed, 'guilty of dust and sin'. Love, the host, approaches 'sweetly questioning,/ If I . lacked anything'. The soul says he is not worthy to be at such a banquet, and there- fore does not like to look at Love who, comforting, 'took my hand, and smiling did reply, /Who made the eyes but I?' Still the soul protests his unworthiness, but Love explains that he (Love) has borne the blame for it:

You must sit down, says Love, and taste my meat: So I did sit and eat.

If one compares the simplicity of Herbert with the consumerist elaboration of Dr Comfort, is it fanciful to detect in the for- mer the lineaments of gratified desire and in the latter a religious impulse unappeased because it is unrecognised?

This sense of something missing or mis- described is even more obvious in the out- pourings of those homosexuals who rage against their persecution by Clause 28 and are militant in justification of their activi- ties. When Derek Jarman, the film direc- tor, revealed earlier this year that, despite being HIV-positive, he still wanders round Hampstead Heath at night and clambers on top of any young man who will have him, were we really to believe that what he was searching for was sexual fulfilment? Did it not sound more like a scream of rage against the Creator whose love he spurns?

There should be limits to this line of argument. St Augustine's belief that all fallen sexual desire was a misdirection of love for God is as reductive as Freud's that sex explains everything. I am merely draw- ing attention to an imbalance. In the 19th century, perhaps, people were told how to worship God but not how to make love to one another. Now it is the other way round, and comparable repressions and agonies occur. Religious energies denied their proper outlets and undirected by any basic education burst out in the equivalent of perversions — mad sects, fundamentalism, drugs. Most parents nowadays who caught their teenage children praying would be as anxious as their great-grandparents would have been if they had caught them mastur- bating.

Yet people are praying all over the place. Opinion polls consistently show that almost everyone prays sometimes, that more peo- ple pray than say that they believe in God, and that a great many people pray every week, even every day. Their needs are not catered for, their worries not understood. The agony aunts who tell them what to do about body odour and unfaithful boyfriends cannot supply their spiritual wants. To overcome such a fog of ignorance and general fumbling incompetence what is needed, surely, is a Joy of Prayer. This should not merely be a book of prayers but a 'how to' book of the sort which has made Dr Comfort so rich. How do you start pray- ing? What do you say? When do you do It with other people, and when alone? Do you kneel, or stand, or sit, or should you do all three? Where can you pray? Can you pray in bed? All this should be accompanied with line drawings both tasteful and instructive. It should take you from the first steps of prayer — putting yourself in the presence of God, relating your prayer to the tasks of the day — through to the ecstasies of a daily and intimate knowledge of Him. It is time to draw aside the veil of prudery that surrounds the subject. Our desire to know and love God is natural and healthy. Therefore let us keep the feast.