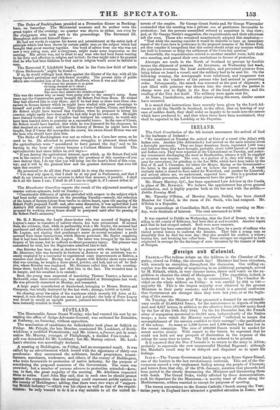 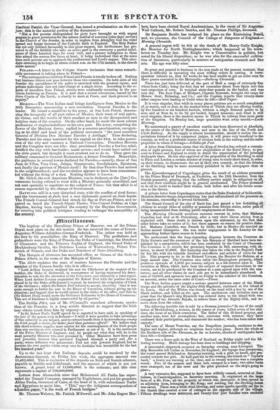 Fnaxcx.—The tedious debate on the Address, in the Chamber of De- puties, closed on Friday, the eleventh day! Ministers had been victorious, with scarcely an exception, throughout the discussion. One trifling ex- ception was the necessity dacquiescing in an additional paragraph, moved by M. Billault, which, in very obscure terms, threw cold water on the ex- pedition to chastise the chiefs of Madagascar. [The expedition, indeed, is understood to have been given up in consequence.] The Chamber di- vided on the whole address on Friday: it was carried by 232 to 141— mikjority 93. This is the largest majority ever obtained by the present Ministers in their party contests; and the result is a general confession that Government are stronger than they were last year, or at the begin- ning of this session. On Tuesday, the Minister of War presented a demand for an extraordi- nary credit of 25,403,841 francs, for the maintenance in Algeria of 34,000 men and 3,317 horses, in addition to the effective force (60,000 men) fixed by the law of the 19th July 1845. On the 1st December last, the French army of occupation amounted to 95,381 men, independently of the Native troops; a force which the Minister considered "sufficient to insure the accomplishment of the mission confided to their courage"—the pacification of the colony. As many as 1,500 horses and 1,500 mules had been lost in the recent campaign. The sum of 200,000 francs would be needed for secret service money. With regard to the future, he regretted that he could not hold out any prospect of diminution in the expense of the colony for some time to come. The bill was ordered to be printed.

It is reported that the Due d'Aumale is to return to the army in Africa; probably to supersede the now unsuccessful Marshal Bugeaud; although the Marshal's recall may be so delayed and disguised as to spare his feelings.

ITALY.—The Tuscan Government lately gave up to Rome Signor Rienzi, one of the leaders in the last revolutionary outbreak. This act of the Go- vernment caused a very unpleasant feeling among the people of Florence; and letters from that city, of the 27th January, mention that placards had been posted in the streets denouncing the Ministers and threatening thenr with death. The Grand Duke, visibly affected by those demonstrations, took his departure for the Maremma,—a marshy tract of shore along the Mediterranean, seldom resorted to except for purposes of sporting.

The recent conversions to the Roman Catholic Church among the Tree- tarisn party in England have attracted a gratified attention in Rome; and

Cardinal Parisi, the Vicar-General, has issued a -proclamation on the sub- ject: this is the material portion of the document- " Not a few persons distinguished for piety have besought us with urgent prayers to grant permission for the solemn festival of a novena (nine days' service) in the Church of the Jesuits, in order to implore from Almighty God the wider spread and happy increase of the Catholic faith in England. The Holy Father has not only listened favourably to this pious reirest, but furthermore has pro- mised to all the faithful who take an active part in the ceremony a partial indul- gence of three hundred days for every visit, and a plenary indulgence to those who attend the novena five times at least; it being understood that at the same time such persons are to approach the confessional and Lord's supper. This nine- days ceremony is to begin at eleven o'clock a.m. on the 17th instant, in the church above named."

Pos.swis.—A letter in the Cologne Gazette intimates that some remark- able movement is taking place in Poland— "The correspondence between Poland and Prussia is totally broken off Nothing but business letters now pass between those two countries. On both sides of the frontier the surveillance of the police is exercised with the greatest rigour, and private individuals dare not take charge of a single letter. According to the re- ports of travellers from Poland, arrests were continually occurring in the pro- vinces bordering on Prussia. It is said that a mixed commission, named by the three Courts of the North, is shortly to meet at Posen, and there proceed to an ingnir9-"

MaxiCo.—The West Indian mail brings intelligence from Mexico to the 30th December, announcing a new revolution. General Paredes is the leader. He issued a manifesto to his army, at San Luis Potosi, denoun- cing the incapacity of all past rulers of Mexico, their want of real patrio- tic virtue, and the results of their conduct as seen in the disorganized and helpless state of the country. On the other hand, he made the most solemn professions of singlemindedness on his own part. His army, comprising the flower of the Mexican forces, replied in a counter-proclamation, recogniz- ing as its chief and head of the political movement " the most excellent General of Division Don Mariano Paredes y Arrilaga." Thus declaring, Paredes and his army marched for the capital on the 21st, to take posses- sion of the city and summon a National Convention. President Herrera and the Congress were not idle: they proclaimed Paredes a lawless rebel; fortified the city with barricades; made arrests; and would have called out the civic guard, but thought it most prudent not to do so. They gave the military command to General Bustamente, a former President. Meanwhile, the garrisons in several towns declared for Paredes,—namely, those of San Juan de Ulloa, Vera Cruz, Jalapa, Guanaxuato, Guadalaxara, Zacatecas, and finally the garrison of Mexico itself ! By that time Paredes had arrived in the neighbourhood; and the revolution appears to have been consumma- ted without the firing of a shot. Nothing further is known.

Mr. Slidell, the new American Minister, was in dudgeon, at the [late] Go- vernment having refused to treat with a Minister generally accredited, and not sent specially to negotiate on the subject of Texas: but that affair is of course superseded by the change of Government.

Haim was still in a very disturbed state, with the conflict of rival forces; and the Govenment de facto had a new diplomatic quarrel on their hands. The French Consul-General had struck his flag at Port-au-Prince, and re- paired on board the French frigate Thetis; Vice-Consul Dubiac, at Cape Has-tien, having been expelled the country by the Ilaytian Government, for entering into political intrigues tending to endanger the tranquillity of the country.