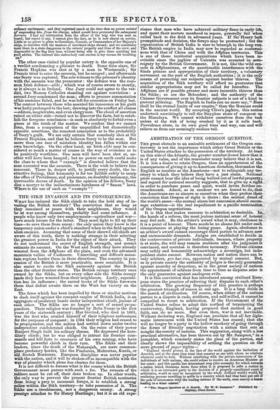 Page 14, 14 February 1846 — THE SIKH INVASION AND ITS CONSEQUENCES. WHAT has induced the
Close

THE SIKH INVASION AND ITS CONSEQUENCES. WHAT has induced the

Sikh chiefs to take the hold step of in- vading the British territory? The conviction that so long as they remained at peace with their neighbours, they would be at war among themselves, probably had some influence. A people who know only two employments—agriculture .and war— have much leisure for the latter. They must fight to fill up their time—to save them from ennui : the only union theyknow is the temporary union under a chief's standard when in the field against alien enemies. Assuming that some of their shrewd old chiefs are aware of this truth, there is nothing strange in their selecting the greatest power in India for the object of their attack. They do not understand the secret of English strength, and cannot estimate its amount. On the West and North they have already wrested from the Affghans all the plain, and even the advanced mountain wallies of Cashmere. Uninviting and difficult moun- tain regions border them in these directions. The country in pos- session of the British is more practicable, more assailable. It is also easier to excite the Sikh animosity against the British than the other frontier states. The British occupy territory once owned by the Sikhs, but on every other side the Sikhs occupy lands they have wrested from their neighbours. Lastly, supersti- tion has its influence : the sacred books of the Sikhs forewarn them that defeat awaits them on the West but victory on the East.

The force which has been impelled by these or similar motives to dash itself against the compact empire of British India, is an aggregate of predatory bands under independent chiefs, jealous of each other. The Sikhs are no longer a sect of armed propa- gandists. Their religion was founded by Baba Nanac in the first years of the sixteenth century; Har Govind, who died in 1661, was the first who availed himself of their religious enthusiasm- for the purposes of conquest; in 1764 their religion had ceased to be propagandist, and the nation had settled down under twelve independent confederated chiefs. On the ruins of their power Runieet Singh built his solitary throne. He depressed the here- ditary chiefs ; but he was obliged to intrust his frontier com- mands and hill forts to creatures of his own raising, who have become powerful chiefs in their turn. The Sikhs and their leaders, since the death of the Maharajah, are mere common- place predatory hordes, like the Pindarees, Mahrattaa, Kurds, or old Scotch Borderers. European discipline was never popular with the nation, and it will be shaken off as incompatible with the war of plunder which alone has charms for them. It is not difficult to foresee what is the course which the British Government must pursue with such a foe. The retreats of the robbers must be cut off, their dens broken up. In other words, the only way to prevent the present frontier British territories from being a prey to incessant forays, is to establish a strong' police within the Sikh territory—to take possession of it. The Sikhs are a troublesome, .not ,a dangerous enemy. A strong prestige attaches to Sir Henry Hardinge ; but it is an old expe- rience that men who have achieved military fame in early life, and spent their mature manhood in repose, generally fail when called back to the field in advanced years. If Sir Henry lack promptitude and decision, the forays may be protracted ; but the organization of British India is sure to triumph in the long run. The British empire in India may now be regarded as contermi- nous with that of China and with the Affghan territories. This is one of those territorial acquisitions which have been in- evitable since the jaghire of Calcutta was accepted in SOW- ty by the British Government. It is not, like the wild cru- sade in Affghanistan, or the questionable interference with the Shade princes and appropriation of their territory, a voluntary movement on the part of the English authorities ; it is the only means of protecting our subjects against border thieves. The acquisition of the Sikh territory will afford no guarantee that similar appropriations may not be called for hereafter. The Affghans are if possible greater and more incurable thieves than the Sikhs ; so are the Belooches; and the authority of the Chinese Government over its frontier subjects is not of a kind to prevent pilfering. The English in India can no more say, " Here shall be the eternal limits of our empire," than the Romans could in the ancient world. By accepting Clive's jaghire, this nation undertook unwittingly to roll the Sisyphus stone of conquest up the Himalaya. We cannot withdraw ourselves from the task unless at the risk of being crushed by it as it rolls back. Providence alone, in its own good time and way, can and will relieve us from our seemingly endless toil.